How Some Muslim Nations are Forging a Real Peace with Israel 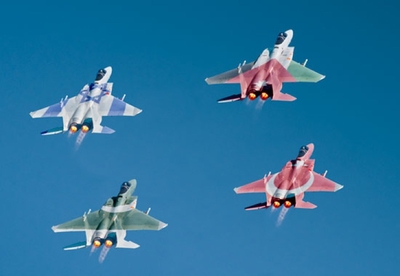 It was a customary political gesture, the welcoming of a foreign leader on Sept. 7 by local dignitaries in The Hague. Benjamin Netanyahu, on a two-day state visit to The Netherlands, was being introduced around the room, shaking hands with Dutch parliamentarians, when he reached Tunahan Kuzu, the Turkish-Dutch founder of the pro-immigration, pro-Islam Denk ("Think") party. Directing his gaze straight at the Israeli president, Kuzu pointed to the Palestinian flag pin he sported on his lapel, and placed his hands pointedly behind his back.

Netanyahu nodded his understanding and moved on.

If Kuzu's gesture was meant to insult the Israeli leader, it backfired. Instead, he came under fire from both fellow members of parliament and the press, who accused him of disrespect, lack of professionalism, and anti-Semitic behavior.

But his critics missed an even larger point: those like Kuzu, and gestures like the one he made, are becoming outdated. Rather, in the larger picture, even some of Israel's most stalwart opponents are starting to change course, with some discouraging Western calls for economic sanctions (like the Boycott, Divest, and Sanction, or BDS, movement), and others even engaging in joint military exercises with the Jewish state.

Unsurprisingly, American politicians have taken the lead in this. Just days after the episode in The Hague, for instance, U.S. House Minority Leader Nancy Pelosi put the kibosh on a planned BDS event scheduled for Sept. 16 on Capitol Hill. Several U.S. states have passed anti-BDS bills throughout the past year, and in signing the Trade Facilitation and Trade Enforcement Act of 2015 in February, President Obama declared, "I have directed my administration to strongly oppose boycotts, divestment campaigns, and sanctions targeting the State of Israel."

But more unexpected have been the military cooperation exercises involving less Israel-friendly countries. In August, Pakistan and the UAE both joined Israel and the U.S. Air Force in exercises at Nellis Air Force Base in Nevada. Israel and Jordan also recently participated in joint exercises with the U.S..

Much of this new military cooperation results from concerns within the region of the growing threat of Iran, Commander Jennifer Dyer, a retired naval intelligence officer, explained in a recent e-mail exchange. "Obviously, the joint participation with Muslim countries is a step beyond participating with NATO. Politically, it's new territory," she observed. "The growing concern in Sunni nations about Iran is, of course, the big driving factor."

As an example, she noted that the chief of staff of Pakistan's army warned in January that "Pakistan would 'wipe Iran off the map' if Iran threatened Saudi Arabia," and that Sudan cut ties with Iran at around the same time. (For its part, Israel has since begun a campaign encouraging the U.S. and other Western nations to repair relations with the African country.)

NATO has played a crucial role in this new cooperation, Dyer said. "The common link through NATO allows Sunni nations and Israel to facilitate military cooperation without going very far in terms of overt political outreach" or "having to make high-profile political declarations first."

"Overt" is probably the key word here. Where outreach in any Muslim country towards Israel could lead to public outcries and violence, collaborations such as these allow these countries to build relationships with Israel "behind closed doors," a potential first step towards long-term normalization.

They also help create a more supportive climate for activists like Sheikh Abdullah Tamimi, who recently spoke at a seminar on Jewish and Arab relations in Israel. As the Gatestone Institute noted in a report on the event, "Tamimi and his colleagues do not believe in boycotts and divestment. They are convinced that real peace can be achieved through dialogue between Palestinians and all Israelis."

That position is shared by many, including hundreds of entrepreneurs collaborating in joint Palestinian-Israeli tech startups and other business ventures. And while Palestinians involved in those projects do not view them as a "substitute for a political solution," Forbes' Richard Behar reported in 2013, they do view them as a way of "improving relations."

Even Kuzu's own Turkey made amends with Israel recently, ending a six-year conflict that began with an Israeli raid on a Turkish flotilla said to be carrying humanitarian aid to Gaza. The reconciliation between the two countries has already led to important cooperative ventures, including a major Turkey-Israel gas pipeline.

All of which combines to make efforts like the BDS movement and the token gestures of politicians like Kuzu the more ridiculous. They are the reasons why Netanyahu could demonstrate respect for Kuzu's position and still so easily shrug him off. Because clearly, while some continue pounding out old arguments, repeating themselves into banal inconsequence, others are already busy building new solutions, based on new realities. The future of the Middle East depends most of all on them.

I wouldn't mistake this as "friendship". It's more of the enemy of my enemy is my friend mentality. Once the condition that generates this (more tolerance than friendship, ironic from one of the worlds most intolerant ideologies, Islam), has disappeared, or dissipated, then normal hostilities will resume.