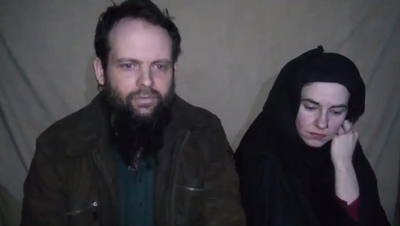 A Canadian man and his American wife who were kidnapped by Taliban allies in 2012 plead for their lives in a video that appeared Tuesday on the social media site Telegram.

The couple is believed to be held captive by the Haqqani network, which is active in the highlands between Pakistan and Afghanistan.

A visibly frightened Boyle called on the United States and Canada to change the Afghan government's policies to spare their captors from possible future execution.

Coleman likewise said that their captors plan to kill her and her family unless their demands are met.

A Pennsylvania native, Coleman was pregnant when she and her husband were captured while hiking in Afghanistan, and she has twice given birth in captivity, according to her parents.

An Afghan Taliban member told The Daily Beast that Boyle, Coleman, and their two children are in good health and are being held in a place where they can move around and exercise.

U.S. officials say they are working to free the family, particularly with help from the Pakistani government, whose military intelligence services, the ISI, has ties with the Haqqani network.

The Haqqani network may be trying to secure a prisoner swap similar to the Sgt. Bowe Bergdahl case, a senior source in the Taliban's Qatar office told The Daily Beast.

This isn't the first hostage video involving Boyle and Coleman. Two videos appeared in 2014 in which they asked for U.S. help in securing their release. Those videos were released around the time Bergdahl was freed.

Coleman's parents released a video in late June pleading with her captors for her family's safe release.

Another American is believed to be held by the Haqqani network, but the person's identity has not been made public.