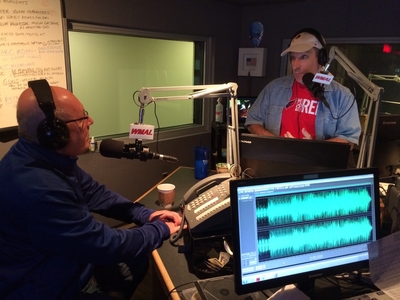 Larry O'Connor: Let's check in now with Representative Pete Hoekstra, former House Intelligence chairman. We've got to check in with him on the rash of terrorist attacks that occurred over the weekend. Thanks for joining us, Congressman. Happy Independence Day.

Pete Hoekstra: Hey, thank you. I was just in Italy. It's great to be back in America. Italy was wonderful, but it's always nice to be home. Thank you.

O'Connor: Did you kiss the tarmac when you got here, right?

O'Connor: Listen, I really would love to hear from you about this unbelievable rash of terror that we saw over the weekend – in Bangladesh, in Iraq – more than 200 people, in Saudi Arabia, suicide bombs all across that area. I keep hearing that this is the holy month of Ramadan, the holiest time in the Muslim calendar, and yet these people who pretend to be the keepers of the flame for Islam seem to love murdering each other during Ramadan. What's going on with ISIS and these terror attacks?

Hoekstra: Well, remember what their objective is as devout Muslims, in their view, is they want to establish a caliphate, they want to establish Sharia law, and so working towards those goals and those efforts during the month of Ramadan they must perceive as a very holy endeavor. They have their long-term objectives and they're using this month to carry those out.

Jessie Jane Duff: Congressman, I'm reading that it was a 12-hour siege in Bangladesh, and from what I have recently learned that the objective with any law enforcement or military, they've got to get in there right away. Twelve hours, how many lives could have been saved? What is your take on this? What, why was there a siege for 12 hours? Why wasn't there a quicker movement to get in there and save the people that they could have saved?

Hoekstra: Well I think what's happening in too many cases, law enforcement is using traditional hostage-taking rules of engagement, saying – negotiate with the hostages, excuse me, negotiate with the hostage-takers, and then you know we can have a peaceful resolution of this. But when you're negotiating with people who have committed to killing themselves, there is no successful negotiation. And my guess, I'm betting that law enforcement and military around the world are quickly changing their rules of engagement that say if we suspect or believe that this engagement, that this terrorist situation is being led by radical jihadists, they're going to kill themselves, they're going to take as many hostages with them as they can, we need to get this resolved as quickly as possible. I don't think you're going to see 12-hour sieges in the future. It just doesn't make any sense with these kinds of people.

O'Connor: Alright, and so now you see these combinations of attacks. Is this one of these coordinated, from your view, is this a coordinated effort that was designed to go down the way it went down over this weekend in various hotbeds around the world, although I don't think Bangladesh has really been a hotbed. But is this the sort of thing that ISIS and their central control actually puts forth and schedules out and then gives the go-ahead and – boom, everybody goes into action?

Hoekstra: A couple of things, number one, Bangladesh has been quite a hotbed, and –

Hoekstra: – at the Investigative Project on Terrorism we predicted there would be more in that part of the world.

O'Connor: Thank you for that correction.

Hoekstra: But no, is there a central command post somewhere in Syria or Iraq that says – OK, Bangladesh on Saturday, Baghdad on Sunday, Saudi on Monday – and those types of things? No. What they did do is send out a clear message – we want attacks before the end of Ramadan. Ramadan in the United States ends today at 5 o'clock, or ends tonight. And so the real question is, I think law enforcement now, is – is this a peak of terrorist activities in the last four or five days that we've seen, and are we now going to have an era of relative stability for the next month or two or three till they can prepare and plan their next series of attacks? Or is this a run-up and is this the new normal, that we're going to be seeing these attacks on a, you know on a weekly basis, two or three attacks scattered all across the Middle East, in Europe, in Asia, the United States and Africa? That's the big question that's going to be confronting law enforcement and military personnel around the world. Bottom line – it's time for the U.S. to recognize and Congress to recognize that this is not about defeating you know conventional extremism. This is a war. These people are at war with the United States. We need to declare war and set our objective as victory over these radical jihadists.

Duff: Well, Congressman, in Baghdad, many people are thinking – oh well that's Iraq – the fact is Baghdad was pretty much a Green Zone. And they've gotten into Baghdad now and caused an explosion against people that were probably largely supportive of the American forces. Two hundred were killed, 81 bodies were so charred that DNA testing will be needed to identify them. What is going on? What is your take on what's going on now if they're in Baghdad?

Hoekstra: Well, what's going on in Iraq is we don't have a successful strategy. We're still not arming the Kurds. We're not siding and helping the Sunnis. These attacks are Sunnis on Shias.

Iraq is basically partitioned, is being partitioned, there is no confidence in the central government. Sure, with Iranian help they took back Fallujah. But the bottom line is the people in Baghdad, the citizens of Iraq, know that other than a few isolated areas and really the Kurdish region and a few other parts in the Sunni regions, the area is controlled by the Shias. The central government cannot protect its citizens on a daily basis. I think you probably saw the same reports that I did, is that they were throwing trash and rubbish at the prime minister.

Hoekstra: And you know –

O'Connor: Clearly there's a confidence problem with the Iraqi government there –

O'Connor: – and the signal is that they just can't keep the people of Iraq safe. So what should the U.S. response be? We've been doing everything we can to remove ourselves from the situation in Iraq, except for the direct military intervention, such as it is, against the ISIS soldiers outside of Baghdad. What should we do now that it's in the heart of Baghdad?

Hoekstra: You know, this argument has been going on for the last two or three years with the Obama Administration. You can, in Iraq you cannot rely just on the Baghdad government. You need to rely on the Kurds in the north, you've got to reestablish relationships with the Sunni tribes, these people will fight, they will die to protect their territories and to get rid of ISIS, and they need to work with Baghdad. But we need to engage directly with all three of them. We need to, you know, Syria is just, is a mess, Libya is a mess, those need new strategies. But the bottom line on this, Larry and Jessie, is – this is a war. And you know we continue fighting it as a law enforcement. There is reports again today that one of the Gitmo detainees who was, you know, let go to Uruguay is now suspected of leaving, we don't know where he is, there's now it appears to be a massive search by U.S. officials, Brazilian officials and Uruguayan officials to find this guy. You know, we're in a rush to release people from Gitmo, even as the escalation of attacks continues. And so you know, no, the bottom line, we're not doing everything we can to defeat –

O'Connor: We're at war and the commander-in-chief is AWOL, it sounds to me like what you're saying.

O'Connor: Former Congressman Pete Hoekstra, we've got to leave it there. But it's always good to have you, sir.