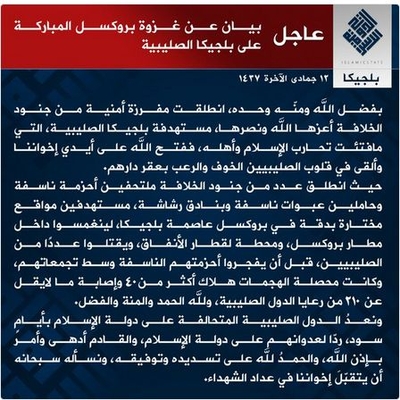 The terrorists who detonated bombs inside Brussels' airport and on a Metro commuter train were "made strong and helped" by God, the Islamic State (ISIS) said in a statement claiming credit for the attacks.

"Crusader Belgium" was targeted because it "has not ceased to wage war on Islam and its people, with God granting victory to our brothers, and planting in the hearts of the Crusaders fear and terror at their doorstep," a translation of the statement by the Investigative Project on Terrorism said.

In the wake of similar attacks, Islamist groups like the Council on American-Islamic Relations (CAIR) have argued that religion is not a factor in fueling the violence, and the Islamic State is not really Islamic. That message isn't getting through. Last week, former Virginia resident Muhamad Khweis described aspects of his life with ISIS before he turned himself in to Kurdish forces.

"Our daily life was basically prayer, eating and learning the religion for about eight hours...it was pretty hard to live in Mosul," he said.

Tuesday's ISIS statement contained repeated references to God, praising him for the success of the Belgium attacks. The terrorists "killed a number of Crusaders before they exploded their belts amid crowds of them," it said. "... To God be praised and blessing and grace."

Belgium and other Western states fighting ISIS "are facing black days in response to their aggression against the State of Islam. Coming is more calamitous and bitter, with God's permission. Praise be to God for His Guidance and Blessing. We ask Him to accept our brothers in the numbers of the martyrs."