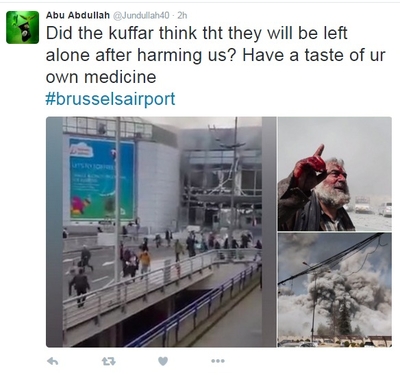 As shocking as this morning's simultaneous terror attacks at Belgium's airport and in its Metro system may be, they show the disturbing depth of the terrorist infrastructure which was allowed to take root in the European Union capital's back yard.

A series of police actions reportedly are underway targeting elements of that infrastructure. It's a safe bet that some of those raids will be in Molenbeek, a Brussels suburb.

It has been dubbed "Europe's terrorism capital." Saleh Abdeslam, the key surviving player in November's horrific attacks in Paris, was arrested in Molenbeek Friday. Police were thanked by a hail of bottles, stones and other debris by locals more loyal to the terrorist than the land that gave them refuge.

Authorities "don't have control of the situation in Molenbeek at present" and said the authorities needed to "clean up" the area, said Interior Minister Jan Jambon.

In raids last week, authorities found an ISIS flag, a book about Salafism, a sizable cache of weapons, indicating more attacks were in the works. They just didn't realize how close to completion those plans were.

The Paris attacks were planned in Molenbeek – three of the attackers grew up there – and the resulting investigation last November prompted officials to place the entire country on lockdown, fearing attacks like Tuesday's in Brussels were imminent.

"We were fearing terrorist attacks, and that has now happened," Belgian Prime Minister Charles Michel of Belgium said Tuesday.

Belgian Muslims have left Europe to join the Islamic State in greater numbers per capita than any other country. It is so pervasive, Buzzfeed reports, that Belgian law enforcement admits being overwhelmed by the volume of open terrorism investigations.

Their challenge is compounded by the depth of Islamist radicalization which has taken root in Molenbeek, as Friday's violent reaction to Abdeslam's arrest shows.

"There is a sort of clannishness in the area that is stronger than anything else," Claude Moniquet, a former intelligence agent now with the European Centre for Strategic Intelligence and Security in Brussels, told London's Telegraph.