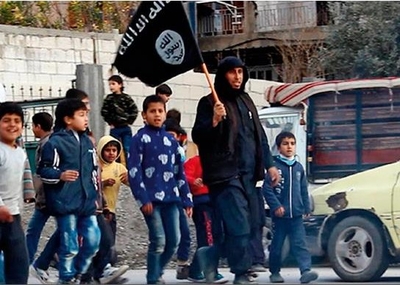 When the leaders of ISIS declared the caliphate of the Islamic State in June 2014, the world already had a strong idea of who they were: a jihadist group so violent, so barbaric, so extreme, that even al-Qaida, with whom they had once been affiliated, wanted nothing more to do with them.

But as the world soon learned, it would get even worse.

The founding of the Islamic State brought some of the most inhumane violence of modern civilization: captives held in cages and burned alive; beheadings captured on video and broadcast on the Internet; mass enslavement and rape of non-Muslim women; and the genocide of Iraq's Yazidi tribe.

Coupled with this has been a perverse propaganda campaign that makes the Caliphate look like a teenage summer camp, aimed at recruiting Westerners to join the jihad and enjoy life in their idyllic, Allah-blessed commune-on-the-sea. And for thousands of Western Muslims, it has worked, either by inducing them to make the journey, or hijrah, to Syria and Iraq, or by motivating them to carry out terrorist attacks on Western towns and cities.

This is what we know.

What we have not known has been the reality of life in the Islamic State, including the social order, the availability of housing and health care and other basic necessities and the treatment of women and children.

A new report by the Dutch Intelligence Service (AIVD) now shines a spotlight into the heart of the Islamic State, its workings, and the psychology of its leaders. The picture it paints is no less terrifying than one might expect, a society increasingly paranoid and totalitarian, devoid of human empathy, lacking in the most vital resources, and yet somehow, still surviving through a combination of propaganda, lies, oppression, violence, and the profound power of delusion.

It is that delusion which seems most apparent in the AIVD report: the myth of a life of comfort and companionship and a coziness with God that ISIS's propaganda promulgates, promotes, and perpetuates on social media; the delusion of those who manage to equate murder and enslavement with religious duty and moral good; and those delusions with which ISIS leaders fill the minds of children raised in their domain – and so, build and secure the future of their narrative and their jihad.

"Violence is inherent to ISIS," the report says. "On a daily basis, it is practiced, glorified, and preached." Through that violence has emerged a state (such as it is) that is at once overbearing, tyrannical, and powerful and yet, at its core, vulnerable, fragile, and afraid.

Following are highlights of the AIVD report, which was compiled on the basis of 18 months of research.

While many Westerners make hijrah not to fight, per se, but for the glory of living in a true Muslim state, the reality that greets them is not what they likely anticipate, the AIVD reveals. Constant bombardments from Assad troops, allied forces, and Russia mean that every day is lived in perpetual fear and danger. The trauma this brings to children, especially, and particularly those who travel to the caliphate with their parents from the West, is incalculable.

Moreover, despite photographs ISIS distributes on the Internet of houses with exquisite views and happy families, most homes are in disrepair. There are food shortages. Medical care is as minimal as one might expect in a war zone that receives no legal imports or medicines, where there are excruciatingly few doctors or nurses, and daily streams of wounded. Electricity is also scarce; most homes can rely on only an hour or two of power every day.

And while all men receive a state salary (with supplements for wives and children), those salaries were recently halved – an unwelcome development for Caliphate citizens at a time when oil income has fallen and prices for basic necessities, especially food, skyrocket.

Men and women are separated on arrival, according to the AIVD. Men are required to swear allegiance to Abu Bakr al-Baghdadi, the self-proclaimed caliph, before being interrogated to ensure they aren't spies. They are then sent into military training. Though not all men sign up to fight, all must be prepared to join the battle if called upon and participate actively "in ISIS-led executions, torture, and rape."

From here, they are generally able to select their own roles, be it as marketing advisers, bus drivers, doctors, or warriors. Some, however, are assigned roles. Reports the AIVD, "specifically-selected men can be trained by ISIS and sent back to stage attacks in Europe."

While many women make hijrah with the idea of joining in battle, in actuality women are forbidden to participate in what is viewed as men's work. They also cannot work closely with men who are not family, a law that further bars them from the battlefield.

They have their own parts to play in the Caliphate, the most important of which is childbearing: as many and as fast as possible. Reports the AIVD, "Mothers are [then] required to raise their sons to be ISIS fighters. Daughters, for their part, are to marry fighters and, with the same purpose as their own mothers, to bear children."

In addition, women can play an active role in recruiting, largely through social media. Others join the all-women Al-Khansaa brigade, which enforces sharia law as it applies to women, be it their manner of dress or their public behavior. "If a woman is apprehended by the brigade and convicted, then another woman carries out the punishment," the AIVD report explains. "Hence even Western women who have joined Al-Khansaa will execute the lashings of women who have, according to ISIS, violated rules and boundaries."

It is the children, however, who suffer most in the Islamic State – children whose lives are made of daily confrontations with death and agony and fear. Nonetheless, shockingly more and more Western families are making their way to ISIS territory with their children, or with pregnant mothers wishing to give birth there. And then there are the children born not just to ISIS brides, but to rape victims and sexual slaves such as the Yazidis.

But where most boys of 7- or 8 years of age may go on fishing trips with their fathers or play soccer in local parks, these frequently are brought to observe public executions and beatings. Parents may pose their child with the head of a beheaded enemy. At school, they learn English, Arabic, and the tenets of ISIS doctrine alongside lessons in the use of firearms and "execution practice." By the age of 9, girls are expected to cover themselves in public, while their male schoolmates are ushered off to training camps to learn to fight.

"Children take an increasingly frequent role in ISIS propaganda," states the report. "In various execution videos made by the group in the first half of 2015, boys between the ages of ten and twelve served as executioner, shooting or beheading prisoners. The use of children in propaganda fits the strategy of ISIS, which largely hopes to use media images to shock and so, gain attention. Through this propaganda, which is often picked up by regular mass media, it becomes clear that parents who travel to the ISIS territory have a fully realistic view of what awaits their children when they get there."

Increasingly, it appears that life in the Caliphate is becoming tougher. A growing paranoia and fear that disillusioned fighters might leave and counter their propaganda with the truth – not to mention a concern about spies attacking from within – haunts ISIS leaders. They are cracking down in response. It is becoming harder and harder to leave the Islamic State, even for temporary, medical reasons.

Similarly, contact between residents of the Caliphate and those on the outside is being increasingly controlled. "Since July, 2015, it is no longer permissible to use wireless internet in Raqqah," according to the report. "The Internet can only be accessed through ISIS-approved Internet cafes, where careful watch is kept over which sites are visited. In some cases, permission must be granted by a military leader or emir to spread information to the outside. Whoever fails to observe these rules must appear before a sharia court."

Such measures ensure that the myth of an idyllic state continues, along with the flow of new warriors and the women who will give birth to them.

Ultimately, concludes the intelligence agency, "the so-called caliphate of ISIS stands far from what the organization purports it to be. The region that is occupied by ISIS is not a holy state or ideal society in its infancy. ISIS functions as a totalitarian regime. Whoever emigrates to the ISIS territory makes a conscious, deliberate choice to take part in an organization, an institution that commits terrorist activities and conducts attacks in Europe. In practice, this means that men as well as women who join the Islamic State, armed or otherwise, take part in ISIS's jihad."

Disallow Sharia Law or any part of ISIS in America

I cannot believe America could become part of such horror or that the United States would allow such intolerable thought patterns from a President as is coming from the Nations Capital. It is coming to a time when; if the people do not take steps to regain control of this country we may lose it to Sharia Laws that will take us to a place in history that we will not recover from. Seeing the way that ISIS has destroyed other places we should be marching on Washington; in force, to retake the Capital. It is apparent that there are too few true leaders in our Government Offices and it is time that the people make their power known once more!!

I find it extremely disturbing that ISIS is a byproduct of Islam and our president Barack Hussein Obama embraces Islam and supports it's expansion in the U.S. Why would any civilized human want to live under Islamic law? They are obviously delusional just like Obama.