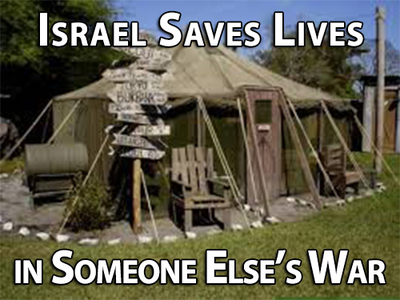 While the mass murder of hundreds of thousands of Syrians by the Assad regime and a raft of regional Islamic terror organizations shows no sign of ending, an unheralded Israeli humanitarian mission recently marked the treatment of 2,000 Syrian patients.

Although the two countries remain sworn enemies, advocates of Israel's program caring for badly wounded Syrians highlight the Jewish imperative to save life whenever possible. Despite endangering the lives of Israeli soldiers and medical personnel, it has enabled critically injured Syrians, with no one else to turn to for lifesaving treatment, to cross the border to an Israeli field hospital close to Har (Mount) Bental.

In a special interview in the Golan Heights, one of the most senior IDF officials involved in the program, (whose identity cannot be revealed for security reasons), discussed the nature of a humanitarian operation that flies in the face of the derogatory, caricatured image of Israel (and of Jews in general), which is peddled by much of the surrounding Arab world.

"This is the main area of the fighting between the Syrian regime – heavily supported by Iranian-funded Hezbollah and now by Russian forces – and the Al Nusra Front, the Syrian Al Qaeda," the medical officer said. ISIS militias have also been present in the area.

"Many wounded people come from this area," he adds, pointing across the valley to the Syrian warzone from a high vantage point. "The rebels don't want the patients to be taken to Israel."

Suddenly, a rocket explodes in the embattled town of Quneitra little more than a mile away. Gray-white smoke rises from the impact. His medics are going to be in for a busy night, the IDF officer resignedly says.

"All of the doctors in this area were probably killed," he explains. "Most of the people that are left are the poor and the most vulnerable. The [Syrian refugees] who go to Europe are the people with thousands of euros who are fit enough to do the journey. Any time the rebels occupy one of the villages the regime places it under siege stopping electricity, water, [and food]. This has been going on for about three years."

The transfer of patients invariably takes place under cover of darkness to lessen the possibility of terrorists firing on the injured and on the Israeli medics trying to help them. They have to cross at a specific place in the border fence that is known to both locals and the IDF, since reaching the field hospital directly would require crossing a 'No Man's Land' that would inevitably result in more casualties.

"As an orthopedic surgeon I can tell you this is the most horrible thing that I have ever seen," the officer continues. "Blast injuries, shrapnel, amputations, head injuries. In my orthopedic department we say the people aren't dead because they haven't read the record of their trauma."

"In the beginning, before the division was built, we had two personnel with PTSD [Post Traumatic Stress Disorder] because we were not as organized as today. Now when there is a problem that we need to talk about, we sit everyone in a circle and everyone talks about what he has done, what was good, what can be better next time, and this [can be very helpful]. The importance of the mission is what gives them so much strength."

It costs a lot of money and manpower to treat Syrians, who the officer insists are not vetted for their affiliation to one warring group or another. But 25 percent of those treated are young men, and Israeli medics assume they likely have been in the fight.

The humanitarian mission has drawn criticism.

Following a bloody massacre by the Al Nusra Front of Druze villagers in northern Syria in June, a small group of Israeli Druze, incensed at the possibility that Al Nusra combatants might be among those being treated by the IDF, attacked a military ambulance and killed a male patient inside.

The IDF officer, who was on duty that night, says he failed in his mission to protect his patient – regardless of who that patient might have been – but has not been deterred in carrying on his work.

"We won't let bad people [force us to] stop humanitarian aid. We have learned our lesson and the civilian police are now involved helping us. When [the mob] attacked the ambulance they didn't know who was inside and they almost killed my people too. It was a trauma. When you fail in your mission it is a very, very bad feeling, but we know we are doing a very moral thing and we decided that it won't stop."

After crossing into Israel, badly injured Syrians are stabilized and taken to public hospitals where they are treated until they are well enough to return home. Remarkably, none of the 2,000 patients treated sought asylum and asked to stay in Israel despite the life-saving care they received. Israel did facilitate a transfer request to neighboring Jordan for one Syrian who wanted to join family members there, the officer says.

"[Syrians] only know Israel as "The Little Devil" – they know America as "The Big Devil" – then they see that the only person in the world that will help them is Israeli. Sometimes they arrive unconscious at the border, are brought to hospital, then after surgery find themselves [here]."

Such is the shock of waking from surgery to find themselves in "enemy" hands, some patients, especially young children who have been most heavily indoctrinated to hate Israel, receive psychological help from Israeli physicians to come to terms with the new reality.

"They soon understand though that this is the only chance they have and they have nothing to lose. As one of the injured people said to a medical commander, 'If I was brave enough I would put a giant Israeli flag on my house.'"

The morality of treating "the enemy" has come into clearer focus in recent weeks through the horrific wave of stabbing and shooting attacks carried out by Palestinians and Muslim Israeli Arabs on Israeli civilians. One senior Israeli ambulance official, who last week said that if a terrorist was injured more critically than his victim, the terrorist would receive priority for treatment, was lambasted in many quarters. Last week, it was revealed that Palestinian Authority President Mahmoud Abbas' brother-in-law underwent emergency surgery in Israel at the height of the terror attacks on Israelis that were being widely encouraged on Palestinian social media and through some official channels.

Many seasoned Israeli observers feel certain that if the boot was on the other foot they would not receive similar medical help from either the Palestinians or, in the case of the field hospital, from the Syrians. There are others who warn that some of those treated in Israeli hospitals may come back to kill the very people who stretched out a humanitarian hand to save them. How would the senior IDF officer feel if one of those whose life he saved came back to murder in Israel?

The sad reality in this particularly violent and unpredictable part of the world is whether helping others in these circumstances, as most religions suggest one should, is perceived by some not as a moral strength but as a strategic weakness.

and Israel treats wounded or ill Palestinians in its hospitals too

But we are often treated to the hatred they express when cured: perhaps there are others who are grateful and express that, but i have never read it. Or, they are grateful, but still feel that they must dedicate themselves to Israel's destruction.

Well BBC??????? Where are your comments on this story???? Complete silence as always on items you don't like...or arent politically correct in your view....sicko's.