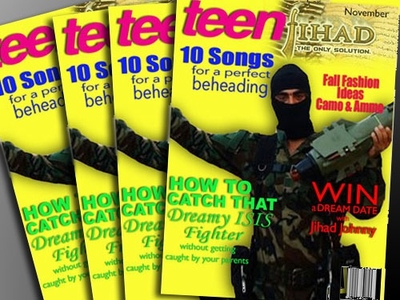 For American teens these days, the biggest heroes are no longer baseball players or even Lady Gaga: they are mostly You Tube stars, like the comedy team Smosh, followed by Katy Perry and – surprisingly – 92-year-old actress Betty White. But for hundreds of thousands of Dutch youth, the heroes of the day are neither film stars nor comedians: they are the jihadists of the Islamic State.

That is the result of a recent study by Dutch research company Motivaction, which found that 90 percent of Dutch Turks ages 18-35 consider the Islamic State (IS or ISIS) members heroes, and enthusiastically support their friends and neighbors who travel to Syria to join them. And 48 percent of Holland's 18-35-year-old Moroccan immigrants agree.

(For reference, the latest official figures count more than 368,000 Moroccan immigrants – first and second generation – in the Netherlands, and more than 395,000 Turks in a national population numbering 16.8 million.)

This is not the first time European Muslims have been shown to support the horrors of violent jihad: earlier this year, British research group ICM determined that up to 15 percent of French youth (between the ages of 18-24) approve of ISIS, as do 11 percent of British between the ages of 35-44.

Such findings help explain much of what drives European Muslim youth to join ISIS and other extremist jihadist groups in Syria and Iraq, but the Motivaction study also lends insight to the general mindset of Holland's – and likely most of Europe's – upcoming Muslim generation. Oddly, while 87 percent of Turkish Dutch youth support jihad in general, and the same 87 percent support IS, 90 percent oppose an Islamic state or caliphate (versus 67 percent of Dutch Moroccans). In fact, according to Motivaction, 93 percent of Dutch Turks believe that "democracy is essential" to progress. Hence, like Turkish President Tayyip Erdogan (whom they overwhelmingly admire), they see the fight in Syria as a revolution against Bashar al-Assad. They want to see him overthrown, replaced by a democratic government. This position suggests they somehow remain oblivious to IS's real intent: to replace the Assad regime with an Islamic caliphate, which it seeks to spread by conquering other countries in the region – including Turkey.

Still, for all of Dutch Turks' defense of democracy, the Motivaction survey also showed their strong Islamic identity – stronger than among Dutch Moroccans. This finding comes as a surprise, given that the majority of known radical Muslims in the Netherlands, such as the members of the radical Hofstadgroep, are of Moroccan heritage. Despite Turkey's historic friendship with Israel, Dutch Turks, like Erdogan, blame Israel for the violence in the region, and a whopping 89 percent view Hamas's armed battle against Israel as "positive" (vs. 49 percent of Moroccans). Turkish Dutch are also likely to view Jews generally as the enemy, and do not believe that peace or friendship is possible between Muslims and Jews – even in the Netherlands.

These findings come at a moment when the Turkish community in the Netherlands is under particular scrutiny, as studies into the most influential Turkish groups indicate possible ties not only to the Turkish government, but to extremism. A Dutch government report released in September, "Turkish Islam: insights into religious streams and organization in the Netherlands," suggests that while these organizations may have helped promote integration, encouraging Turkish first- and second-generation immigrants to excel in school, business, and politics, they have also urged them to achieve and exercise "one-sided (political) power and influence of their own group, and to strengthen their Turkish-Islamic identity." Much of this action comes through direct financial support of the Turkish government and the Diyanet, or Turkish Office for Religious and Islamic Affairs. As a result of the "Turkish Islam" study, Minister of Social Affairs Lodewijk Asscher recently called for a five-year surveillance of the largest Turkish organizations in the country – a demand that has also led to drama and disruption within the Dutch Parliament.

Despite the differences between Dutch-Turkish and Dutch-Moroccan views of IS and jihad, the larger picture painted by the Motivaction survey is one in which shockingly large numbers of Muslims in the Netherlands– and presumably across Europe – openly favor violent jihad. If 87 percent of Turkish Dutch youth consider it "good" that "groups fight for change in the name of jihad" while 80 percent see "nothing wrong" with the use of violence against non-believers, and if 39 percent of Moroccan Dutch agree, we are looking at a few hundred thousand potential jihadists in this one small country alone.

What's important here isn't just the numbers: it's the people those numbers represent – young men and women raised in Europe, with Western values, Western ideals, who nonetheless worship those who slaughter and rape and torture for Allah. As Europe's leaders must worry about what to do about their Muslim citizens as they return from the Syrian jihad, perhaps it's time, too, that they consider what do about the ones who stayed at home.

The source of our woes.

Uncontrolled immigration has resulted in a dramatic increase in the crime, violence and terrorism that ordinary citizens are victim to. So yes I will support and vote for anyone that promises to deport undesireables.

Turkey has gone over to the dark side. Actually, Turkey has spent most of its short life in the dark. A shard of light that in recent years tilted democratically west was just an anomaly. The history of Turkey is violent. Violence is also the history of Islam that comes easily through the teachings of Sharia law.. The present vitriolic anti Israel government of Turkey under Islamist President Erdogan, a demagogue who encourages violence against Israel, should come as no surprise to anyone.

Europe is now embracing Islam and so our latest NATO member, Turkey, should fit in quite nicely to this impending second front of Islam.