Later that day, amid the report's assessment that Hamas had lost much of its will to fight, the terrorist group agreed to the latest Egyptian-brokered ceasefire.

There is growing discontent among the Hamas ranks, as the group suffered significant terrorist casualties, destruction of vital military infrastructure, rocket construction capabilities, and major destruction of its sophisticated underground tunnel network, the Post report said. Israel's successful targeted assassination of senior Hamas leaders severely disrupted the terrorist organization's command and control structure, and even resulted in the desertion of rank and file terrorists from battle.

In light of the assassinations, growing suspicion of Israeli intelligence infiltration also forced Hamas to halt the use sophisticated technologies in the battlefield, significantly reducing its ability to fight. The growing mistrust and panic led Hamas to summarily execute over 20 Palestinians accused of collaborating with Israel.

Mid-range commanders allegedly fled with their families from conflict zones to avoid having their houses destroyed, producing a sense of mistrust and abandonment among remaining fighters. In one case, 14 Hamas fighters were reportedly trapped in a tunnel for 20 days with no supplies while their commanders failed to even attempt a rescue effort. Some are believed to have starved to death.

According to the Israeli assessments, many within Gaza's society are disillusioned with Hamas, whose leaders were among the first to hide underground leaving the civilians to cope with Israeli retaliation to Hamas' indiscriminate terrorist campaign. Hamas is also accused of confiscating aid transferred into the Gaza Strip, intended for needy civilians, and giving it to its own members. 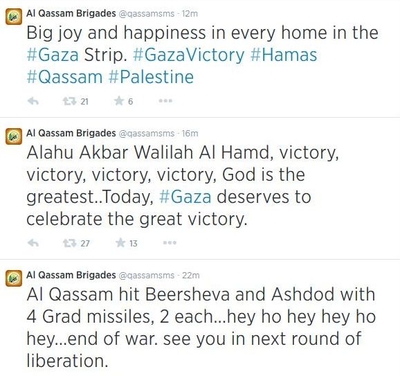 None of this reality has stopped Hamas from claiming victory. Hours before the cease-fire went into effect, dozens of rockets and mortar shells targeted southern Israel, wounding dozens and killing one Israeli. The Hamas Al-Qassam Brigades boasts of its terrorist campaign and perceived diplomatic victory over Israel, touting that it is preparing for the next round of hostilities against the Jewish state.

Hamas leadership continues to make clear that they remain committed to Israel's destruction. The Gaza war showed that they are willing to sacrifice their own people, by constantly firing from civilian population centers and structures, including mosques and hospitals, in hopes of advancing that goal.

Of course Hamas claims victory, is anyone really surprised. They remind me of the recently decapitated chicken running through the barnyard on his way to a store to buy a new hat.