Who watches the watchers?

The performance of the media in covering the Israel-Gaza conflict remains the one area of investigation that is sorely needed. 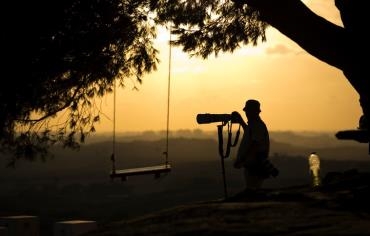 As is the historical pattern concerning Israel, last week began the growing tsunami of groups - representing the United Nations, The Hague, the European Union, human rights groups, and other non-governmental organizations - announcing their intention to "investigate and review" the military actions under taken by Israel and Hamas during the past five weeks to determine if "war crimes" were committed.

We know from past history the demonstrable manifestation of the vitriolic anti Israeli (and some might add anti-Semitic) bias by nearly all of these organizations clamoring to declare Israel guilty of war crimes, as they have repeatedly accused Israel in the past of everything from massive human rights violations to war crimes to genocide.

No other country in the world - even those like the Sudan, North Korea and Iran - who have committed genuine massive human rights violations - have ever been the object of such massive condemnations as Israel has selectively been. And as far as the official inclusion of Hamas actions into the investigative agenda of these groups, we know that their inclusion is only window dressing, designed to give the false veneer that their investigations are "even handed."

Yesterday, the UN announced that nearly 2,000 civilians were killed in the Ukrainian battle with the pro Russian separatists in Eastern Ukraine in the past 2 days alone. Two-thousand in two days? In five weeks, Gaza suffered 1,957 deaths, of which most were actual terrorists, not civilians, as the mainstream media and UN agencies had speciously alleged. But don't expect any onslaught of investigations by the UN or human rights groups. And where was the international media coverage of the 2,000 deaths in eastern Ukraine? AWOL of course.

Indeed. the performance of the media in covering the Israel-Gaza conflict remains the one area of investigation that is sorely needed. And if truth be told, why should the media be afraid of an assessment of its performance? After all, it is a profession that claims the moral high ground, asserts that it is only pursuing "the truth," claims that it is the only institution in a free society that can provide accountability to the actions of the government, hence the moniker "Fourth Estate" for the media, and portrays any criticism of its performance as somehow an attack on "free speech."

But who watches over the watchers?

Well, no one actually does. Yet the media likes to proclaim they are self-policing and that any external oversight would be a violation of the fundamental right to free speech. So from time to time, ever so rarely, we actually witness the media admitting to mistakes and inaccuracies in its coverage. Generally speaking however, those admissions of wrongdoing are initiated not by the high priests in the mainstream media but by "lesser" media on the periphery of the priesthood, outside observers and critics who have caught the media with their hands in the cookie jars and by truly honest journalists, few as they are, snubbed and derided by the mainstream media. Just look at how established journalists Bernard Goldberg and Sharyl Attkisson were viciously denigrated and attacked by the mainstream media after they had the chutzpa - actually integrity - to criticize the performance of their own co-religionists.

What is at stake here is the very honesty and accuracy of the mainstream media's coverage of the Israel-Gaza war. Specifically, how honest, fair and accurate was the mainstream media - such as The Washington Post, National Public Radio, The New York Times, and CNN - in covering Hamas actions in Gaza, Hamas human rights violations and atrocities, and Hamas threats to journalists. We know all too well how they covered Israeli actions in Gaza. Coverage of the deaths and damage in Gaza was covered wall to wall by both print and television, often without providing the critical context that the Israeli targets were Hamas terrorist missile launching sites, Hamas command and control headquarters, and Hamas military sites - all embedded in Gaza's civilian population centers, from schools to hospitals to UN Centers.

In the coverage provided by those above named media outlets, there was not one photo of one Hamas terrorist, not one photo of a Hamas missile site embedded in a civilian area, such as a UN school, hospital, apartment building, kindergarten. There was not one story or photo of Hamas executions of Palestinian dissidents. And there was not one story about direct Palestinian threats to and harassment of journalists if Hamas suspected them of actually showing any of the above. Thus, it was with amazingly refreshing candor that we witnessed Foreign Press Association (FPA), an organization of 480 international journalists covering Israel, the West Bank and Gaza, actually issue a statement last week condemning the threats by and intimidation of journalists by Hamas.

It's worth reprinting the actual text of the FPA statement, known for its antipathy to Israel than for any criticism ever issued of Hamas.

"The FPA protests in the strongest terms the blatant, incessant, forceful and unorthodox methods employed by the Hamas authorities and their representatives against visiting international journalists in Gaza over the past month. The international media are not advocacy organizations and cannot be prevented from reporting by means of threats or pressure, thereby denying their readers and viewers an objective picture from the ground. In several cases, foreign reporters working in Gaza have been harassed, threatened or questioned over stories or information they have reported through their news media or by means of social media.
We are also aware that Hamas is trying to put in place a 'vetting' procedure that would, in effect, allow for the blacklisting of specific journalists. Such a procedure is vehemently opposed by the FPA."

Worse, some journalists like the Jodi Rudoren, New York Times bureau chief in Israel, dismissed the FPA statement with total disdain. In a blog posted by the media oversight group CAMERA, Rudoren's response to the FPA statement was short and sweet: "Every reporter I've met who was in Gaza during war says this Israeli/now FPA narrative of Hamas harassment is nonsense."

The CAMERA blog then went on to cite the numerous reports by journalists, after they left Gaza, of how Hamas threatened, intimidated and manipulated them.

But all that must have been part of a fabricated Zionist narrative according to Rudoren. And so must have been the report about the planned massive Hamas multi tunnel attack that was to occur near the period of the high holy days. This planned attack was intended to kill up to tens of thousands of Israeli civilians. But in the more than 800 stories filed by The New York Times during the five-week war, the Times never reported a word of it. Why? According to an email that I obtained that sent by Rudoren, she claimed she spoke to an Israeli military official who dismissed the planned Hamas attack as "totally false, a rumor, no evidence whatsoever."

When I asked Peter Lerner, an IDF spokesperson about this plot, he said, "Israeli military intelligence confirmed beyond a shadow of a doubt that Hamas had planned to carry out this multi-tunnel attack in order to kill thousands and thousands of Israeli civilians." Nearly every single Israeli media outlet—even those like Ha'aretz known for their ultra left views—reported on this mass murder Hamas plot. But left unreported for readers of the Times, thanks to a manifestly pernicious ideological agenda of its bureau chief in Israel.

Rudoren was interviewed on CNN's Reliable Sources on July 30, 2014 The show's host, Hala Gorani, revealed CNN's own unvarnished anti Israeli bias in the questions she asked of Rudoren: "Jodi, we have been showing our viewers and international networks have been running these images of absolute devastation and the humanitarian disaster in Gaza. Are Israelis in their own country seeing these same images?

Rudoren responded: "Not as much. I mean, certainly some. But in some ways you have to seek it out. I -- someone told me that they were watching Al Jazeera so that they could get the other side as well."

In fact, as anyone watching Israeli television, there was extensive coverage of the damage inflicted by the IDF in Gaza. Rudoren's statement that Israelis had to sneak viewing of Al-Jazeerah was simply a fabrication. But to CNN, it was incredulous that Israelis could not disown their own government for defending them from the thousands of rockets reigning down on the entire population and the dozens of tunnels dug into Israel to carry out mass murder attacks. Unlike CNN, Israeli television also showed how Hamas had stored munitions and launched missiles from mosques, hospitals, schools and UN facilities. Israeli TV also showed photos of Hamas command and control facilities at Al Shifa hospital as well as photos of the actual munitions and missile launching sites embedded in civilian areas.

On another CNN Show that aired on August 3, 2014, host Brian Stelter acknowledged that viewers had complained that CNN was deliberately refraining from showing pictures of Hamas terrorists or how they operated out of civilian areas.

Stelter: "So are reporters in Gaza under pressure from Hamas? Are they being intimidated into only showing civilians, and not the people Israel calls terrorists?

Well, I asked the executive in charge of international here at CNN, Tony Maddox. And he says no.

Let me put his comments up on screen: "Our in-field reporters have repeatedly say that Hamas militants are rarely to be found on the streets of Gaza. We have had no intimidation from Hamas and received no threats regarding our reporting. They have so far refused all requests for interviews in Gaza.

Egypt also has fired on Gaza. Egypt has declared Hamas and the Muslim Brotherhood to be terrorists and has outlawed them, seizing their assets.

Why does the media ignore Egypt? Both Egypt and Israel are targets of Hamas' atrocities.

It is not just Jews that Hamas hates. It is anyone who does not share their brand of Islam.