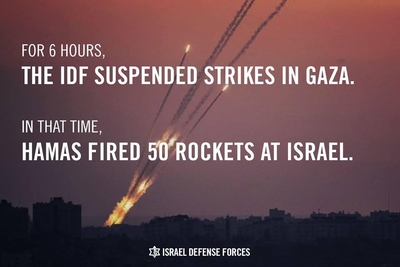 Once again, Israel finds itself facing Hamas' rocket attacks from the Gaza Strip as the terrorists turn their civilians into human shields. Before the security fence was built on Israel's eastern border, suicide bombers were sent to kill Israelis by bearded sheikhs who sanctimoniously claimed they were innocent of any link to the military-terrorist wings of the Islamist organizations. With the security fence in position, the number of terrorist attacks from Judea and Samaria has decreased dramatically, even as the Palestinians point at the fence for the foreign media, throw rocks at it and whine "Apartheid."

After Israel withdrew from the Gaza Strip and turned it over to the Palestinian Authority, Islamist terrorists continued murdering Israelis. In 2007, two years after Israel's withdrawal, Hamas conducted a putsch and wrested the Gaza Strip from the Palestinian Authority. Since then Gazan terrorism has steadily increased and Hamas fires its artillery into Israel with the stated purpose of murdering as many Jews (always Jews or Zionists, never Israelis) as possible. Instead of using the Israeli withdrawal to build a Middle Eastern Riviera and be a shining example of coexistence, the Palestinian terrorists chose to show the world that any area vacated by Israel would become an Islamic emirate worthy of the 8th century, from which Hamas, unfettered, would send it murderers and rockets into Israel.

Hamas' basic working premise is evil and immoral beyond belief. Its policy is that the best way to scare Israelis and to make them, "return to Europe or leave for America" is to kill civilians, because its supporters rest secure in the knowledge that Israelis, trapped by morality and commitments to the international community, will not dare do to Hamas what Hamas does to them. They rest secure in the knowledge that if Israel pays them back in kind, the international community will always support the Palestinians and condemn, censure and deplore Israel's actions, force it into a ceasefire and keep Israel from deterring Islamist terrorism. Every time Israel has struck back at terrorists, damaged Hamas' infrastructure and killed its terrorist operatives, the international community has demanded "proportionality." As soon as Hamas began to take losses, its international anti-Semitic defenders immediately raised the absurd demand that Israel strike back "proportionally," an eye for an eye, as it were.

By virtue of Israel's creative technology, the defense systems it developed have drastically reduced the number of civilian casualties caused by Hamas rockets, despite the immense quantities of missiles directly targeting Israeli population centers. Israel responded with controlled, monitored attacks on the source of the rocket fire and the bases from which Hamas attacked Israel's cities. Exploiting the moral trap imposed on Israel by the international community, which knows nothing of Middle Eastern mentality, the terrorists deliberately seek shelter within densely populated civilian areas where there are schools, hospitals, United Nations relief facilities and mosques, with the objective of causing civilian casualties which can be cashed in for political and propaganda capital.

Forced to operate within the limitations imposed on it, Israel has more than once been coerced into aborting attacks before achieving its objectives, in many instances not blowing up terrorist bases or warning civilians to vacate terrorist locations before attacks. Hamas cynically exploits the IDF's careful approach. The more terrorist operative casualties caused by a complex IDF operation, the more Hamas uses Palestinian civilians as human shields.

Nevertheless, despite the care taken by the IDF, Palestinians civilians are harmed when Israel targets terrorists and when that happens, the IDF appoints committees to investigate. On the other hand, when Hamas inflicts casualties on Israel, it boasts of its achievements in its media and mosques, and hands out candy in the street. That is the kind of enemy Israel faces, and the kind of conflict in which it is currently engaged.

Hamas uses Gazan civilians as human shields in every conflict it initiates. Thus, regardless of how carefully Israel attacks, uninvolved civilians have been harmed. Again and again the Palestinians whine that their civilians are being harmed, and anti-Israeli elements in the West pounce on the opportunity to vilify Israel for the number of Palestinians killed. When only one Israeli is killed so far, it is somehow regarded as unfair.

Perhaps the better question is why Hamas refuses to find another path. Why does it insist on a failed strategy and a war crime – deliberately firing missiles at civilians – to achieve its aims? Why do its officials encourage civilian casualties by praising human shields and urging people to ignore Israel's warnings before a target is bombed?

Instead, Israel is held to an impossible moral double standard. Israelis, proportionality advocates seem to believe, should be killed by Hamas rockets instead of following Home Front Command instructions and running to shelters, to say nothing of Israel's blatant unfairness in protecting its civilians with the Iron Dome aerial defense system.

Palestinian Authority President Mahmoud Abbas would like for Israel to destroy the nests of Hamas terrorists (who threaten him and his followers), however he still called Israel's self-defense "genocide." He has yet to dissolve the national consensus government he formed with Hamas, making him, at least formally, responsible for Hamas' rocket fire. He does not condemn Hamas, does not stop it from firing rockets, does not dissolve the government of terrorists, and claims he has no responsibility for Hamas' actions.

Yet, the world demands that an equal number of Israelis and Palestinians die, an idea which is not only monstrous but reveals a barely-hidden anti-Semitic agenda.

Israel's overzealous critics seek to paralyze it and disrupt the daily lives of its civilians. Anyone who demands that Israel agree to a life of terror governed by a continuous barrage of rockets and mortar shells on the heads of its women and children in the name of restraint and "proportionality" would never agree to risk the safety of their own families in a similar situation. This is a summer spent with no summer camps, no going to the mall, no trips to the zoo, no trips to the beach, no swimming pool, just terrified children jumping at every noise, and parents at home, unable to go to work, everyone periodically running to the closest bomb shelter. Had Israel agreed to its critics' perverted idea of "proportionality," it would long since have ceased to exist.

Israel's critics should study 20th century history, not only from the aspect of the Jews. In the Second World War, the Allies had no compunction whatsoever about punishing the Germans for the blitz of Britain and firebombed Dresden, killing approximately 25,000 people. They had no compunction about dropping two atomic bombs in Japan in revenge for the attack on Pearl Harbor, killing about 250,000 people. In Vietnam, the Americans napalmed and otherwise killed more than an estimated 1 million Vietnamese. In Iran and Afghanistan, "collateral damage" included members of a wedding party and school children, all considered legitimate actions, all considered "proportional."

The ridiculous demand for proportionality contradicts every basic principle of warfare. According to American strategist Thomas Schelling, you have to strike your enemy hard enough to make it not worthwhile for him to continue. Anyone who wants to neutralize Israel's ability to defend itself against an enemy trying to destroy it and claims "proportionality" has as his objective the destruction of the State of Israel. In the Western world, killing someone in self-defense is considered justifiable homicide.

Only recently has the West begun to realize the danger presented by the spread of radical Islam, whether in the Middle East, Africa or elsewhere. Hamas and the Islamic movement in Israel are no different from al-Qaida, Boko Haram, the Islamic State in Iraq and Greater Syria, the Al-Nusra Front and the Muslim Brotherhood. They all sow destruction and terror across wide swaths of the world, murder and rape indiscriminately, and turn millions of people into refugees. While radical Islam has as its final goal the takeover of the entire world, and while Israel is the only island of sanity in that region, there are still people who doubt its right to defend itself.

As others have noted during the past week, Israel has worked hard to minimize civilian casualties. The very objective of Hamas' campaign of rocket fire is to create civilian casualties. Yet United Nations High Commissioner for Human Rights Navi Pillay gave voice to the Western demand for proportionality. She scolded Israel and claimed international law demanded more.

"We have received deeply disturbing reports that many of the civilian casualties, including of children, occurred as a result of strikes on homes. Such reports raise serious doubt about whether the Israeli strikes have been in accordance with international humanitarian law and international human rights law," Pillay said in a statement.

Anyone who advocates fighting radical Islamism and its terrorism "proportionally" is either delusional, a liar, a knave, an anti-Semite or has a strong death wish (or possibly all of the above). They will discover that the September 11 attacks were only the coming attractions for genuine Islamist terrorism.

An excellent article. Unfortunately, "westerners" have little knowledge or experience as to how the eastern Islamic mind thinks.

Look what is now happening in Iraq. The Christian community that had lived lived in Mosul for over 2,000 years is now being forced by ISIS to convert to Islam, pay a head tax, or leave. On attempting to leave, all their possessions of value are being confiscated. Reminds me of what happened to Jews living in Spain in the Middle Ages [forced to become Catholic] which should not be a surprise as the Muslin fanatics want to bring the western world back to the Middle Ages.