Israeli military forces struck more than 150 targets in Gaza overnight in what might be a protracted campaign to stop the latest wave of rocket fire from Hamas and other terrorist groups aimed at Israeli civilians.

Officials called up 40,000 reservists in preparation for what might be a ground invasion of Gaza. Israeli Defense Forces (IDF) report striking more than 150 targets overnight, while a nearly equal number of rockets were fired from Gaza into Israel. Israel's Iron Dome system intercepted several of those rockets.

At least one rocket was fired at Tel Aviv Tuesday evening, but it was intercepted by the Iron Dome system. Others reached Jerusalem and Hadera - more than 60 miles from the Gaza Strip.

One Israeli strike targeted a vehicle carrying Muhammad Sha'aban, 24, a senior member of Hamas's al Qassam Brigades, killing him and several other people.

"Hamas chose to escalate the situation" with unprovoked rocket fire, Prime Minister Benjamin Netanyahu said Tuesday, "and it will pay a heavy price for doing so."

Already the military campaign, dubbed "Operation Protective Edge," has generated two surprising, but positive developments. First, Israel's Independent Media Review Analysis organization points out that a Palestinian Centre for Human Rights release about the strikes detailed Israeli efforts to limit civilian casualties. The release notes that, before bombing two homes suspected of serving as "command and control centers for enabling rocket fire against Israel," Israeli drones fired warning shots. In at least one case, the target also received a call on his cell phone "ordering him to evacuate the house. A few minutes later, Israeli fighter jets bombarded the house, destroying it completely." 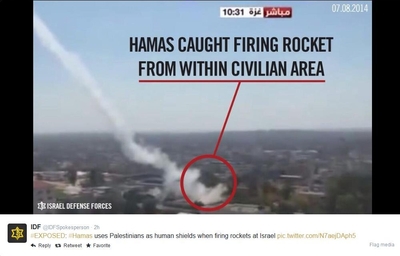 Hamas deliberately places missile launchers and operational support in civilian areas to use surrounding neighbors as human shields. The IDF posted a picture of one rocket rising from a densely populated neighborhood.

The BBC, meanwhile, promptly debunked social media claims posted under the hashtag #GazaUnderAttack, purporting to show devastating damage from Israeli strikes. The news service's analysis shows many come from conflicts in other countries at least as far back as 2009.

Promoting sensational images falsely attributed to Israeli military action is a standard Palestinian propaganda technique that has been described as "Pallywood." The tactic needs to be kept in mind as the conflict continues. Israeli military and political leaders are asking people for patience in dealing with the latest conflict.

"In recent hours, we have struck with force and hit dozens of Hamas assets," said Defense Minister Moshe Ya'alon. "The IDF is continuing with the offensive effort, in a manner that will exact a very heavy price from Hamas. We will not tolerate missile and rocket fire on Israel, and we are prepared to expand the campaign through all of the means available to us, to continue striking Hamas."

Update: The IDF posted this video showing a team of Hamas terrorists trying to sneak into the Israeli town Zikim from the Mediterranean Sea just north of Gaza. They reportedly carried grenades, but were intercepted and "neutralized."

It is obvious. Israel must take Gaza. There is no other solution. Obama and his Hamas and Fatah friends have always and will always have no interest other than blood, destruction and anarchy.

Israel has the Right to Protect herself as stated in ( Genesis 12:2-3 KJV )!! GOD Blesses Israel and HE curses the people that wish to destroy Israel-Yisrael!!

Shalom Everyone, YSIC in the USA!!