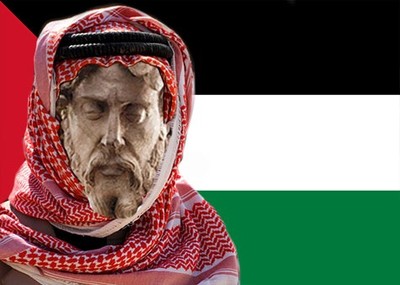 The Palestinians likely were furious when the Pope Francis visited Jerusalem two weeks ago. They believe that when the Pope or any foreign official visits Jerusalem it is de facto recognition that it is the capital of the State of Israel.

To keep emotions boiling during his visit, the Palestinian media systematically issued false reports of how Israel "prevents" Christian worship and sends its thugs to attack and vandalize Christian holy sites in and around Jerusalem. When the Pope visited, it was no different. Palestinian propaganda has carefully avoided mentioning that only since the liberation of Jerusalem by Israel have the various religions enjoyed complete freedom of worship in a united Jerusalem. Moreover, Palestinian leaders have been shocked by the fact that in the past year, Israeli Arab Christians have increasingly enlisted in the Israeli army. Despite their efforts, even Palestinians specializing in anti-Israeli propaganda have found it hard to make their accusations stick if only because of the endless incidents of rape, murder and vandalism perpetrated against Christians by the forces of radical Islam in various locations around the globe, including Egypt, Syria, Lebanon, the Gaza Strip, Iraq and throughout Africa.

Art in the service of the PLO's lie industry is a constant factor of Palestinian media and helps the PLO leadership mold the organization's policies. Interviewed in 2000, Palestinian artist Yasser Abu Sido said "the Palestinian struggle against Israel is eternal. It began 2000 years ago (sic) and continues to this day. I illustrate it by depicting Jesus, who came into the world with a message of justice, and the Jews did what they did to him. The Palestinians demand the same rights and to be treated the same way. I illustrate that by showing Israeli soldiers as the Palestinians see them, in uniform. I show Jesus with nothing but the truth. When he was searched at the entrance to Jerusalem all they found on him was a stone, a piece of bread and a fish, and for that he was put in chains. That is the Palestinian who began the struggle and will continue it until it ends, if it ends..."

The Palestinians have adopted Jesus as their own: According to Palestinian TV in 2008, "Jesus was the first in a long line of sufferers. The Palestinians, naturally, are accustomed to such a death, the suffering of the first Palestinian, the Messiah, began at the Last Supper." In 2012, on a Palestinian TV program about the Via Dolorosa, there was a subtitle reading "Mother, what did I do wrong? Am I forbidden to bring a message of peace from my Lord? That was the crime of Jesus, the Palestinian Messiah." In 2010, the PLO's website claimed the Virgin Mary was a Palestinian, saying that her pride was a model for the female shaheeds (those who commit martyrdom operations), prisoners and fighters who had become icons of dedication and sacrifice.

Such absurd notions are part of the disinformation campaign waged by the Palestinian terrorist conglomerate called the PLO in its ongoing effort to steal the Jewish identity and historical rights to the land of Israel. But using tactics of counterfeit and fabrication the Palestinians, in an effort to vilify the Jews , know full well that their propaganda falls into the fertile ground of age-old European anti-Semitism, where the Jews were officially absolved of the death of Christ by the Catholic Church only in 1965, and more recently by Pope Benedict XVI in 2011.

According to the PLO's newspaper Al-Hayat Al-Jadeeda in 2000, the Palestinians also have asserted that Nazareth, was "the city whose first son was killed by the Jews." In 2004 it called Capernaum, where they said that the "Palestinian Messiah" changed water into wine, by its Arabic name, Kafar Kana. In 2005 the PLO newspaper called Jesus the first "Palestinian shaheed" (martyr) and in 2006 claimed that the Arab countries were the cradle of Christianity and that the Christian Jesus was a Syrian Palestinian who was born in Nazareth [sic]... In 2012 it wrote, "We are proud, oh son of Mary, that you are the first Palestinian who redeemed mankind so that love would continue to light the way." This is all part of the revisionist Palestinian narrative to claim that Jesus was a Palestinian and thus deny that Jews ever lived in the land of Israel.

Rewriting the history of the Land of Israel to deny Jewish historical rights and the right to exist as an independent state has long been a fundamental principle of Palestinian policy. Long before the 2000 terrorist campaign (the so-called "Al-Aqsa intifada") began, the Palestinians initiated a campaign to eradicate Jewish history and replace it with a fictitious Palestinian narrative. The idea was to erase 3,000 years of Jewish history and presence in Israel and substitute it with an "ancient" Palestinian, Arab and Muslim "history." The strategy was adopted at a 1998 conference of Palestinian historians, who made the direct link between rewriting history and the political objective of denying the right of Israel to exist.

Dr. Yussuf al-Zamli, the chairman of the history department at the teacher training school in Khan Yunis (in Gaza), called on the universities and other educational institutions to propagate the PLO's false narrative of the history of Palestine and not to allow foreigners and enemies to "distort" it and give the Jewish presence any legitimacy.

Deleting Jewish history from the Land of Israel is accompanied by the invention of historical stories, ancient and modern, the fruit of the Palestinian Authority's Middle Eastern imagination, to support the PLO's political ideology and claim of ownership. Save for some courageously honest Palestinians, the Holocaust and other aspects of Jewish history have largely been denied, while simultaneously concealing the fact that Jesus was a Jew who lived in Israel. According to Al-Hayat Al-Jadeeda in 2005, "We must not forget that Jesus the Messiah was a Palestinian, the son of Mary the Palestinian." (It was only in the last two months that PA President Mahmud Abbas—who wrote his doctoral dissertation denying the existence of the Holocaust—finally conceded in an interview, although begrudgingly that the Holocaust did occur.)

The Romans changed the name of Judea to Palestine 136 years after Jesus was born to punish the Jews for the revolt of Bar Kochba. In addition, since there is no P in Arabic, the Palestinians incorrectly pronounce the original Roman name Palestine as Filastine. In 2013 Al-Hayat Al-Jadeeda published an article entitled "The Resurrection of Jesus, the Resurrection of the State." It stated that "Easter...is not only a holiday for Palestinian Christians, but for Palestinian nationalism, because Jesus, may he rest in peace, was a Canaanite Palestinian. His resurrection three days after he was crucified by the Jews, as reported by the New Testament, reflects the Palestinian narrative, of the struggles with the descendants of the modern colonialist Zionist Judaism, which plots with Western millionaires who claim to belong to Christianity. Jesus, may peace be upon him, was the honest national Palestinian ancestor who renewed the Old Testament, left Judaism, and established and spread a new covenant. For that reason he was pursued by the Jews until they caught him, crucified him and then killed him [sic]. He was then resurrected like the Phoenix and went to spread his gospel, which is still alive and will continue to exist as long as mankind exists. The story of Jesus is the story of the Palestinians."

Similar declarations were made at a ceremony to mark the 48th anniversary of the PLO's founding held in Bethlehem and covered by Palestinian TV. Saeb Erekat, a prominent PA official who has participated in the peace talks with Israel, gave a speech in which he praised Yasser Arafat and his comrades, saying that "It is not logical that now, at the end of 2012 we celebrate [the 48th anniversary of the founding of Fatah] near the birthplace of Jesus … the first Palestinian shaheed, and [have to] tell him that the children of Palestine are still being killed by the occupation in the Gaza Strip, [and are still] being killed in the Yarmouk refugee camp... (Palestinian TV, December 31, 2012).

The appropriation of Jesus as a Palestinian was repeated by Mustafa Barghouti, a member of the Palestinian parliament in 2009, who said that "Jesus was the first Palestinian to be tortured in this country." The theme was picked up by the governor of the Ramallah district when he said in a speech given to enthusiastic Palestinians that "[w]e all have the right to be proud that Jesus was a Palestinian and that Palestine was the cradle of religions and the land of civilization" (Al-Hayat Al-Jadeeda, 2012).

Palestinian propaganda becomes even more absurd when Islamic clerics, especially Palestinian religious leaders, deny the very existence of the Jewish Temple in Jerusalem, dismissing it a Jewish fabrication. At the same time, these same honorable sheikhs claim patronage of the "Palestinian Messiah." Palestinian religious and political propagandists deliberately market their myths even though they contradict their own beliefs. Even the Qur'an specifically that Jesus died, stating that Jesus was not killed, and it only seemed to people that he died (Surah An-Nisa' verse 157).

What would Jesus, who preached peace and turning the other cheek, do if he knew he had been adopted as a radical Palestinian icon of violence, a shaheed and a mass murderer of innocents committed by Islamic militants – egged on by Islamic sheikhs – and responsible for the persecution of Christians throughout the Muslim world? What would he do if he knew he had been adopted by a Palestinian terrorist conglomerate as a shaheed? What would he do If he had foreseen that the PLO, which has killed thousands of innocent people, would make him a Palestinian icon for terrorism and bloodshed? The fact is that Jesus was a Jew from the Land of Israel and preached in its capital, Jerusalem. All the Palestinian delusions, illusions, lies and inventions cannot change that.

It would be interesting to know if the Mufti of Jerusalem propagated the same poisonous ideas with the Pope when they met. Whatever happened, the Pope embraced Jerusalem as the cradle of Christianity when he visited here. And that fact should finally dispel Palestinians attempts to rewrite history and rob the Jews of their rights to their own country and capital by twisting the religion and history of Christianity to erase Israel.