Standing Up For – And To – Terrarabism Part Two (End)

The United States has fallen prey to Political Correctness, and thus refuses to acknowledge a connection between Islamic terrorism and the Islamic religion.

Even worse, those who dare produce evidence of such a link–often in the words of the terrorists themselves–are marked for attacks on their integrity.

So wrote Steven Emerson, founder and executive editor of The Investigative Project on Terrorism (IPT), in an ad/editorial published in The New York Times in late May.

"Our nation's security and its cherished value of free speech has been endangered by the bullying campaigns of radical Islamic groups, masquerading as 'civil rights' organizations, to remove any reference to the Islamist motivation behind Islamic terrorist attacks.

"These groups have pressured or otherwise colluded with Hollywood, the news media, museums, book publishers, law enforcement and the Obama Administration in censoring the words 'Islamist', 'Islamic terrorism', 'radical Islam' and 'jihad' in discussing or referencing the threat and danger of Islamic terrorism."

Among the examples Emerson sited of the corrosive effects of Political Correctness on America's anti-terrorist policy:

· Federal prosecutors are prohibited from investigating the religious justifications for terrorist attacks.

· The FBI has succumbed to pressure from these Islamist groups by purging and destroying thousands of books, pamphlets, papers and PowerPoint presentations that were deemed to be "offensive to Islam."

· Brandeis University capitulated to an organized campaign to rescind plans to give Ayaan Hirsi Ali–a tireless campaigner against abuses of women in Muslim cultures–an honorary degree.

· ABC Family Channel killed a pilot TV series, called "Alice in Arabia," about an American teenage girl forced to live against her will in Saudi Arabia.

· Universities have canceled screenings of the 2013 documentary, "Honor Diaries," which explores violence against women in honor-based (and mostly Islamic) societies.

And he posed the disturbing question: "How can we win the war against radical Islam if we can't even name the enemy?"

Yet many on the Left believe this is a question that should not even be asked.

One of those is Raya Jalabi, a copy editor for the liberal British newspaper, The Guardian.

Jalabi wrote: "Why would the New York Times stoop to running an Islamophobe's ad?" She went on to describe the ad as "gratuitously offensive on racial, religious or ethnic grounds."

She then took issue with the IPT's "plea for readers to 'learn more' about the unnamed terror groups wreaking havoc on these United States."

Jalabi then railed against "an 'education' pamphlet that urges citizens to fight back against the 'campaign of censorship' that the supposedly 'main radical Islamic groups' have been waging against the most sacred freedom: free speech.'

"Never mind," she asserted, "that the groups whom the IPT calls 'radical Islamist terrorists' are actually mainstream Muslim-American groups–like the Council on American-Islamic Relations (CAIR) and the Muslim Students Association [MSA].""

Click here: Why would the New York Times stoop to running an Islamophobe's ad? | Raya Jalabi | Comment is free | theguardian.c

Yet on October 3, 1993, the FBI electronically monitored a meeting between members of CAIR and the terrorist organization Hamas.

According to the FBI: "The participants went to great length and spent much effort hiding their association with the Islamic Resistance Movement [Hamas]."

And in 2007 CAIR was named, along with 245 others, by U.S. Federal prosecutors in a list of unindicted co-conspirators in a Hamas funding case involving the Holy Land Foundation.

In 2009 the FBI stopped working with CAIR outside of criminal investigations due to its designation.

And the Muslim Students Association has had its own share of terrorist adherents. According to Jihad Watch:

· In April 2012, Muslim Student Association member Tarek Mehanna, who earned a doctorate at the Massachusetts College of Pharmacy, was sentenced to 17 and a half years forÂ conspiring to aid al-Qaida.

· Abu Mansoor Al-Amriki (a.k.a. Omar Hammani), a terrorist leader and former president of the University of South Alabama"s Muslim Students" Association, was added to the FBI"s Most Wanted List in 2012.

Jalabi congratulated herself on Twitter for her attack on IPT: "Friday is cool because I can call out #Islamophobia and thus be part of the campaign of censorship trying to take down America…."

Sixty years ago, on March 9, 1954, at the height of the Joseph McCarthy "Red Scare," Edward R. Murrow, the most respected broadcast journalist in America, offered an eloquent argument against censorship: 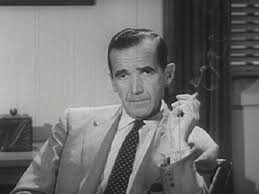 "We will not walk in fear, one of another. We will not be driven by fear into an age of unreason, if we dig deep in our history and our doctrine, and remember that we are not descended from fearful men—not from men who feared to write, to speak, to associate and to defend causes that were, for the moment, unpopular…."

That argument–like the First Amendment–still stands, and both are worth remembering.

Steffen White is as an investigative reporter, freelance writer, legal investigator, publicist for authors and troubleshooter. I am currently a blogger at Bureaucracybuster.com: "Fighting political and bureaucratic arrogance, incompetence and/or indifference.