Free speech and the First Amendment apparently only apply when you agree with the content of the message. Just ask the author of a column denouncing the ad that the Investigative Project on Terrorism (IPT) placed on NYTimes.com last week.

The IPT's ad elevated the issue of the Islamist campaign to censor references to violent jihad and radical Islam in government publications and programs. It cited several examples of terrorist attacks motivated by radical Islamist ideologies and concerted efforts to silence critics of Islamic extremism.

who penned a commentary titled, "Why would the New York Times stoop to running an Islamophobe's ad?" bragged on Twitter on Friday that: "Friday is cool because I can call out #Islamophobia and thus be part of the campaign of censorship trying to take down America…."

It did not matter to Jalabi that the IPT's ad praised "courageous Muslim voices who dare criticize radical Islam."

Jalabi earlier wondered on Twitter how the ad could have passed muster with The New York Times, saying: "How @Nytimes deemed Islamophobic ad not 'gratuitously offensive on racial, religious or ethnic grounds' is beyond me."
She also added "+1" in agreement with 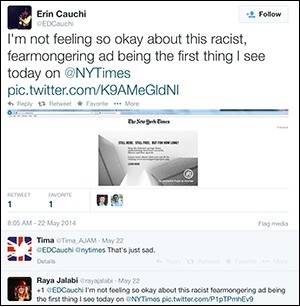 an Al Jazeera America producer who tweeted, "I'm not feeling so okay about this racist, fearmongering ad being the first thing I see today on @NYTimes."

"Never mind that the groups whom the IPT calls 'radical Islamist terrorist groups' are actually mainstream Muslim American groups – like the Council on American Islamic Relations (Cair) and the Muslim Students Association (MSA) … stretching beyond recognition their alleged ties to anti-Semitism, Hamas and the Muslim Brotherhood," Jalabi wrote in her article.

Her article never once addresses the hard, court-tested evidence, such as seized documents compiled by the Muslim Brotherhood's Palestine Committee that make CAIR's terrorism connections plain as day.

A federal judge ruled in 2009 that prosecutors in the 2008 Holy Land Foundation (HLF) Hamas terrorism financing case had shown pieces of evidence that "create at least a prima facie case as to CAIR's involvement in a conspiracy to support Hamas." The same judge also noted that there was "ample evidence to establish the associations of CAIR, ISNA (the Islamic Society of North America) and NAIT (the North American Islamic Trust) with … Hamas" – undermining Jalabi's contention that mainstream equals a clean record.

Lingering questions about CAIR's Hamas ties proved adequate for the FBI to end official ties with the group in 2008.

Jalabi also fails to mention the connection of CAIR's top executive, Nihad Awad, with virulently anti-Semitic individuals such as Sheik Yusuf Qaradawi, who notably stated that Hitler was God's punishment on the Jews and who issued fatwas authorizing suicide attacks against Jews and Americans.

Perhaps Jalabi should consider examining the primary evidence instead of trying to shut down the conversation because she and fellow like-minded individuals find what is being said inconvenient to their ideology.

Bragging about joining the extremist Islamist censorship campaign only serves to further prove our point.

I greatly appreciate IPT's ad in the NYT. However, I must say this article here is naive. Does IPT seriously think that Jalabi or any other of the jihadists trying to advance their cause by infiltrating the media will be bothered with facts about the HLF trial? Trying to educated them is pointless. Also, 99% of muslims will side with the extremists against everyone else when push comes to shove. After all, they follow the same religion which commands muslims to do what the islamists do all the time: wage war against unbelievers or burn in hell. So always pointing out that 1% of muslims (which are not even muslims) is nonsensical. There's no good muslims just like there's no good nazis.

And in case IPT hasn't noticed yet: the jihadists are infiltrating the media: Hollywood via MPAC, the news with people such as Jalabi, the governments with their minions such as Ellison etc. Also, there's several former MSA, CAIR etc. infiltrators in the state department and elsewhere whose names I have but the IPT has never mentioned.