Beyond Belief: Palestinian Terrorists Smuggle Sperm Out of Israeli Jails 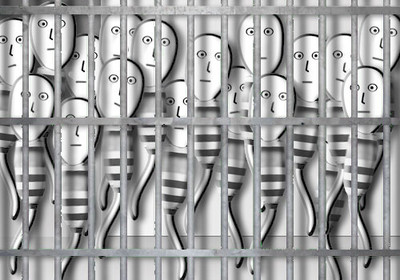 Israel's jails, especially its maximum security prisons, employ cutting-edge technology to prevent contraband – drugs, cell phones and weapons – from being smuggled in. Recent reports in the Palestinian and international media, however, point to a new challenge: Palestinian women who claim they were inseminated with the sperm of their husbands, who are security prisoners sentenced to long terms in Israeli jails.

Given the circumstances, it would seem like an impossible claim. Security prisoners are not allowed conjugal visits. However, if in the past Palestinians smuggled in cell phones and weapons, today they may be smuggling out frozen sperm.

Many Israeli jails provide a refrigerator with a freezer in every cell, and it would appear that they use them to freeze their sperm in plastic bags. The bags are smuggled out either by visiting relatives, or, according to certain reports, by their lawyers. One way or another, they are delivered into the hands of women who use the sperm for artificial insemination. On visiting days, children up to the age of eight are openly allowed to hug their relatives, and hidden among the candy and other treats the terrorists bought for them in the prison canteen are the plastic bags of sperm. Knowingly or not, the children become couriers.

No one knows to what degree the prisoners are eager for fatherhood. Some of them have already fathered several children. It is also hard to imagine, given life in Palestinian village society, that the family of a prisoner's wife who becomes pregnant through artificial insemination while her husband is still behind bars would not rouse suspicion. There would be many, perhaps too many questions: why was she so eager to have a child while her husband was in jail? Was it really artificial insemination, or was she already pregnant by another man? Had she lost faith that her husband would eventually be released? Who went with her to the doctor? Who was the doctor? The prisoner himself might begin to wonder if perhaps the plastic bags might have been mixed up, perhaps the courier or even the doctor himself might have deliberately used different sperm. And in conventional, conservative, suspicious Palestinian Islamic society, what would the neighbors say?

Health professionals call it a medical miracle, because the bags of frozen sperm travel long distances in buses provided by the Red Cross and equipped with coolers. At the end of the journey, the bags are brought into the Palestinian Authority's territory and delivered to women treated by fertility experts. It would not be surprising to learn that the treatments were carried out within Israel and paid for by the Israeli taxpayer. In Israel, which paid a salary to the family of a former Arab Knesset member who fled when his treason as a Hizballah agent was exposed, any absurdity is possible.

Sources within the Israeli prison system reported that one day a Palestinian woman with an infant in her arms came to the gates the jail and asked to meet with a security prisoner who, she claimed, was the father of her baby. She said she had run into problems because the child was not registered as his son, and so far no DNA testing had been done to determine paternity. Sperm smuggling can be prevented by the prison authorities, but the issue is problematic and the smuggling is kept secret. If a prisoner has been found to have smuggled his sperm out of prison he will be denied the priceless privilege of receiving visitors.

Despite prison conditions, security prisoners in Israeli jails receive extensive benefits and do not suffer from the deprivations usually associated with prison life. They eat the same food as IDF soldiers, and their medical and dental treatment is more accessible than for IDF soldiers. Until recently, Palestinian security prisoners studied for Open University academic degrees – and two years ago, when that became impossible – they began participating in study groups and now receive "degrees" from pseudo-academic Palestinian institutions. In addition they have visits from their families, lawyers, and Red Cross representatives, privileges denied to Gilad Shalit, held prisoner by Hamas terrorists for more than five years.

However, when the Palestinian Authority entered Judea and Samaria after the Oslo Accords, there were instances in which Palestinian security forces imprisoned men and sexually blackmailed their wives. They promised the women early release for their husbands and then claimed the women had given themselves of their own free will, leaving Palestinian public perception with a residue of suspicion. Today there are reports of tragedies since apparently a few women married to security prisoners secretly chose sexual freedom over fidelity to their husbands or divorce, and decided not to wait endlessly until their husbands were released. Female security prisoners have told me that many women who needed help from the Palestinian Authority were often offered help in return for sexual favors.

The basic lack of trust and faith involved deeply affects the morale of the prisoners, and they guard the honor of their wives lest they leave them. Prisoners who successfully smuggled sperm out of jail knew that it was the only stage of the process which they could monitor. Even wanted terrorists pursued by the Israeli security forces began freezing their sperm so that if they died as shaheeds they would not be denied fatherhood. It's an unusual concern, because shaheeds are promised the ability to have children in Paradise. The new approach of artificial insemination using smuggled sperm destroys the ancient conservative Palestinian convention of intimacy as proof of fatherhood, and thus the identity of the father will always be uncertain, as will the degree of fidelity of wives or the possibility of their sexual exploitation.

Over the years, it has been shown that imprisonment does not isolate the security prisoners and they continue as respected members of their external environment, with influence and the ability to foment unrest in Palestinian society. Now it appears that they can even have children while in jail. However, despite the terrorists' sensation of achievement when their families grow, and their sense of victory at having fooled the Israeli prison authorities, there are those who say that it is nothing more than a cover story or a "respectable" way to solve problems of family honor and hide incest and sexual conduct considered deviant by the patriarchal Palestinian family.