Children Victimized by All Sides in Syrian Conflict 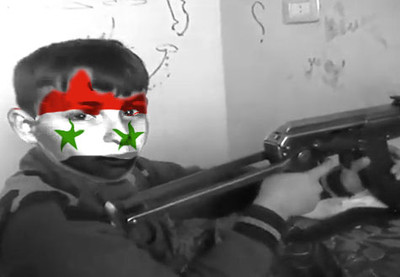 His hands are barely large enough to reach the trigger, but the 5-year-old boy pulls hard on his AK-47 as his father stands beside him cheering. Elsewhere, a boy of 4 raises a machete, then strikes, beheading an unarmed prisoner.

These are the scenes that are emerging from Syria now, as opposition groups ranging from the Free Syrian Army to the al-Qaida affiliated Al Nusra Front recruit children, boys barely old enough to stand alone, to fight. But unlike most young boys who frequently play "soldier" and "superhero," pitting the good guys against the bad guys, their weaponry is real. And there aren't any good guys.

A Human Rights Watch report sounded the alarm as early as 2012, noting the documented deaths of "at least 17 children who fought with the FSA. Many others have been severely injured, and some permanently disabled." Few listened.

Yet now, videos recently uploaded to the Internet depicting boys on the streets of Syria confirm this and other reports about the rise in child soldiers in the ongoing civil war. In addition, the United Nations Security Council's "Report on Children and Armed Conflict in the Syrian-Arab Republic," dated Jan. 27, discloses horrific abuses by President Bashar Assad's forces, who subject children to unspeakable forms of torture:

Government forces have also been responsible for the arrest, arbitrary detention, ill treatment and torture of children. Armed opposition groups have been responsible for the recruitment of children both in combat and support roles, as well as for conducting military operations, including using terror tactics, in civilian-populated areas, leading to civilian casualties including children.

Torture often is used against children to force confessions from their relatives, studies have found. "Ill treatment and acts tantamount to torture reportedly included beatings with metal cables, whips, and wooden and metal batons; electric shocks, including to the genitals; the ripping out of fingernails and toenails; sexual violence, including rape or threats of rape; mock executions; cigarette burns; sleep deprivation; solitary confinement; and exposure to the torture of relatives," according to the UN Security Council's analysis. "Reports indicate that children were also suspended from walls or ceilings by their wrists or other limbs, were forced to put their head, neck, and legs through a tire while being beaten, and were tied to a board and beaten."

It doesn't stop there: further evidence also suggests that Syrian armed forces have arrested young children – girls as well as boys – to use as human shields. And none of this includes the sexual violence against girls, perpetrated by male fighters on all sides of the conflict.

It is almost too much to bear, simply reading of these atrocities. Imagine being a child, living them.

But if most of us see the vulnerability, innocence, and naiveté of young children as treasures to be protected, Syrian opposition fighters see them as assets to be exploited. Indeed, al-Qaida and other groups view these boys as prime targets, Waliyuddine Mukhtar, a psychology professor at Cairo University, told Waleed Abu Al-Khair, a reporter for CentralAsiaOnline.com.

"Children, especially those under 10 years of age, cannot think for themselves; in other words, they are controlled and have no choice. Thus, saturating them with jihadist ideology and ideas, especially persuading them to carry out suicide operations, is very easy compared to doing the same to older [recruits]," he said. "As a result, years from now, a new generation of youth will emerge and pose a very serious threat not only to Syria, but to surrounding countries as well."

David Shapiro, a clinical professor of psychiatry at New York's Weill Cornell Medical College agrees. "This atrocious example of child abuse is likely to create more symptomatic, antisocial and murderous behavior," he told me in an e-mail. "It is a catastrophe."

This is what happens to child soldiers: in an interview with CNN, Ismael Beah, a 12-year-old orphan when he was recruited to fight in Sierra Leone, explained, "Somebody being shot in front of you, or you yourself shooting somebody became just like drinking a glass of water."

Another former soldier, quoted in the UK's "The Situation," put it this way:

Typically, child fighters, both in Syria as in Sierra Leone and other African wars, are abducted and forced into battle, or are coerced into joining. Syrian children face particular dangers, as opposition groups infiltrate refugee camps outside of Syria's borders to recruit youth, according to Human Rights Watch.

But others sign up voluntarily, either to emulate their jihadist fathers or in response to propagandistic videos distributed by al-Qaida and the Islamic State in Iraq and Sham (ISIS), a fundamentalist terrorist group considered the most violent of the forces engaged in the Syrian conflict. Human Rights Watch reported witnessing older men at refugee camps "encouraging boys to join the armed opposition." And YouTube videos seen by HRW depict children who speak of wanting "to be martyred."

Add to this a report from Reuters, which described "evidence of a new trend of minors, Europeans and North Africans from Tunisia and Algeria who, in the words of a UN official, "apparently crossed into Syria for the Jihad."

And yet, with Assad's forces actively torturing children, it is not impossible to understand why those same children – or their friends and siblings – might seek to take revenge. What's more, children pressured to choose sides – and that pressure is enormous – are faced with a situation UN Secretary General Ban Ki-Moon called simply "beyond all imagination:" Nowhere is safe. There is no home base. And the conflict in Syria continues, as horrific as it is tragic, the nightmare from which it seems that there will be no waking.

In my life it has been my happy and occasionally unhappy experience to encounter a vast number of people who experienced World War II firsthand in Europe as well as in Japan, as local civilians. Among them stands out a person who was a child warrior in Montenegro; he identified proudly as Serbian, and happily potted Nazis as a kid sniper during the 1940's. He was less happy to welcome the overlordship of his fellow Slavs via Stalin after the war, and eventually migrated to Paris, and then NY. He manifested no long lasting horrors from this sniper experience; as he told it, he was taught to use a rifle as a kid to hunt for dinner anyway, and if a Nazi got in the way of his sight, so much the better. He did try to waste as few bullets as possible on the Nazis...He was protecting his family while gathering food.

I would suggest that automatically declaring that all such kids are automatically screwed psychologically is a flawed argument. Granted, my above example was not mustered into a kids' unit by force. But he acted, repeatedly, and violently, and remained proud of his service to humanity, as he saw it. Should we demean it? Should we declare it, prima facie, wrong? He went on to have a great life, raised two kids with a wonderful Croatian wife. That in itself should give some food for thought. The Croatians were allied with the Nazis during the war.

"You cannot be completely happy with all these wounds—both in your body and in your mind."
—15 year-old child soldier
In October of 2010 the Obama administration decided to leave countless kids stranded on some of the world's bloodiest battlegrounds. The administration stunned human rights groups by sidestepping a commitment to help countries curb the military exploitation of children. President Obama issued a presidential memorandum granting waivers from the Child Soldiers Prevention Act to four countries: Chad, the Democratic Republic of the Congo, Sudan and Yemen. The memo instructed Secretary of State Hilary Clinton that it is in our "national interest" to continue extending military aid to those countries, despite their failure to comply with the rules Congress passed and George W. Bush signed in 2008.
While in Iraq and Afghanistan my son, a career soldier, was so heartbroken over the plight of the children. But the great Liberal Left so tolerant and loving knows best. Excuse me while I puke.