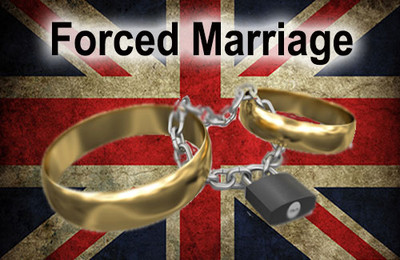 The original tale may be apocryphal, but the story of the silver spoon has saved the lives of hundreds of British Muslim girls being forced into marriage by their parents. "Put a spoon in your knickers," a counselor at the British organization Karma Nirvana told a young girl being sent abroad to wed against her will. Karma Nirvana attends to the needs of girls being threatened with forced marriage, many of whom are under the age of 17.

The idea behind the plot was simple, but ingenious: the spoon would set off alarms at airport security, whereupon the unwilling bride-to-be could explain her situation to a law enforcement officer who could then intervene to protect her.

The ploy evidently worked, and has been adopted since by other young women in the UK, most of them British-born, who are sent to their parents' original homes and villages in Pakistan, Bangladesh, and elsewhere to marry first cousins they have never met, conscribed to a life of servitude and worse.

It's a trick more and more girls seem to need. According to the Australian Broadcasting Corporation (ABC), Britain's Forced Marriage Unit took in 1,485 such cases in 2012. And that's just a drop in the proverbial bucket: Britain's Chief Prosecutor Nazir Afzal told the ABC, "There are probably between 8,000 to 10,000 forced marriages or threats of forced marriage in the UK every year." Even more shocking, according to the FMU, of those, nearly 1,500, or "thirteen percent involved victims below 15 years [and] 22 percent involved victims aged 16-17." One victim was merely two years old; another, at the other end of the spectrum, was 71.

Almost half of these cases involve Pakistani families, many of whom reportedly take advantage of dual nationality rights so that British officials cannot intervene once the girl is on Pakistani soil, the BBC reported. Getting her there, however, is often the problem – one which generally involves either violence (a girl is beaten and locked into her room until she agrees to marry) or deceit (frequently, a girl will be told she will be attending a wedding in Pakistan during her summer holiday; only when she arrives does she learn that the wedding is her own). Because parents so often will use the summer school holidays to spirit their daughters away, officials have begun sending out alerts for airline officials to be on the lookout for young girls traveling to Southern Asia, the Middle East and North Africa. Teachers are also being asked to watch for girls who do not return to school in the fall.

Other measures are also beginning to be put in place in the UK, including a law to criminalize forced marriages. And as Phyllis Chesler, an American scholar who writes frequently on the subject, told me, "The Special Prosecutor of honor-based crimes now has the power to return such girls if they can be found and say they are willing to be re-patriated."

But for now, the issue remains, and women and girls continue to be married off against their will to men they've never met, who usually do not share their values, mores, or world view.

Forced marriage, it should be noted, is not the same as an arranged marriage, in which bride and groom are both willing participants in a union organized by their parents. In forced marriages, one or both are unwilling; and girls particularly who refuse are often subjected to unspeakable violence, which at times has been known to end in an honor killing.

When they do submit, their "marriages" more often than not involve abusive husbands, in-laws who expect them to act as servants, and rape. Many become pregnant before they even turn 15, as was the case with one British-Pakistani girl, whose marriage a British judge recently refused to dissolve, citing legal restrictions.

Yet while many argue that these arrangements, like arranged marriages, occur in many cultures and across religions, statistics show another story, particularly in the West, where the vast majority of forced marriages occur in Muslim families. Almost all the UK victims, for instance, are Muslim along with some Sikhs, coming not just from Pakistan, but also from Bangladesh, India, Afghanistan, Saudi Arabia, and Somalia.

For years, such marriages were organized in large part to bring the grooms and their families to the West, says Sameem Ali, author of Belonging, a memoir of her own forced marriage. And according to ABC, "Sometimes girls do not return to Britain until they are pregnant, the theory being that this may assist the process by which the husband seeks residency in the United Kingdom."

But as the immigrant population grows, more and more forced marriages are even taking place in British mosques – despite British laws prohibiting marriage below the age of 16. Soeren Kern, an analyst with the Gatestone Institute, recently described a situation in which one Muslim cleric, officiating at the forced marriage of a 14-year-old, declared, "She's 14. By Sharia, grace of God, she's legal to get married. Obviously Islam has made it easy for us. There is nothing against that. We're doing it because it's okay through Islam."

But if the problem lies within the immigrant community, Ali also blames the British, and specifically, the multiculturalists who, she says, are "afraid to tread on the toes" of the Muslim community. "I keep seeing professionals who say 'it's a cultural issue, why are we imposing our cultural values on this community?'" she tells me. "But that young girl is being forced into marriage, and that young girl needs help." Rather than focus on the religious or cultural aspect of these marriages, says Ali, "they should be attacking it for what it is: a child abuse issue."

But isn't it also a cultural or religious one?

Ali is adamant that this should not matter to the authorities. "It's for me, for those in the community, to worry about the culture," she says. "Everyone keeps using that as an excuse, that they don't want to be seen as treading on the toes of the Muslims. But why not? If the community didn't want to pick up Western values, then why have they moved to a Western country? The people of this country need to start asking that question."

That they don't, she believes, explains why both forced marriages and honor killings, also rampant in the British Muslim community, continue almost 30 years after her own grim experience. "If people had asked the right questions then, we wouldn't have the term 'honor killing' on everyone's lips now. We wouldn't have gotten to the point where everyone knows what that is," she says. "Too many Muslims use Islam as a way of putting people back into the Stone Age. It doesn't help when Western people use my religion to do the same."

The Words IS Out - So Why Isn't Anyone Listening?

We have been warning of this in the US for such a long time bu tit falls on deaf ears as we are cast by Liberals as racists. They then defile our Christianity while upholding Islam as something other than a religion.

The invasion of the world by Muslims is, for the most part, not to find a better life or to assimilate. The goal of Islam is literally to rule the world under one religion, "Islam" and to subject everyone to one law, "Sharia",

How else to explain migrations to countries like Sweden, Finland, Holland and even England, etc.? They move from Desert and Sun to Cold and Wet. Their spread around the world and their out-birthing non-Muslims will eventually give them the majority wherever they go. That will occur in the not too distant future. And the stupid Political Correctness of the host Countries is aiding in their own self-destruction.

Liberals around the world need to open their eyes to the Reality around them and stop living in an unworkable fantasy of a future Utopia!

Sameem Ali is absolutely right! If they want to be in our western countries and western culture they must give up the old ways and accept and adopt the new ones (western cultural norms and values). If they don't want to do that, they shouldn't be here.

They have cowardly or muslim judiciary, I'm afraid to say we also do. The practice of forced marriage is just plain evil.

Wonderful exposé of a terrible practice under the guise of religion.