Guest Column: The Orient Express from Mecca to the Vatican
Christians in the Cross Hairs 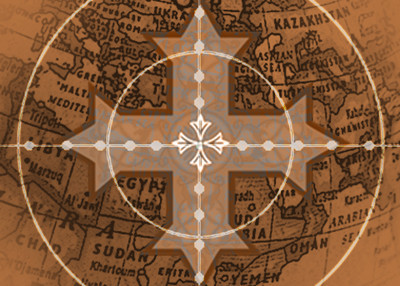 On November 3, 2013, Christian figures from around the Middle East gathered in Beirut to hold an emergency meeting. Most of them came from Syria, Egypt, Lebanon and Iraq, seeking to create a dynamic to improve and reinforce the defenses of Arab Christians, who are currently being persecuted by radical Islamists in their own countries.

The atmosphere at the meeting was one of extreme distress. The representatives reported that the so-called Arab Spring had led to the strengthening of violent Islamist movements which were now targeting the Christian sects in the Arab-Muslim world, especially in Egypt, Syria and Lebanon. Attacks on Christians reflected the refusal to recognize other religions, especially Christianity, as having the right to exist in the Arab-Muslim world, and damaged the delicate fabric of unity, "coexistence, forgiveness and dialogue," according to Lebanese MP Michel Aoun, that had existed until now among the various religious sects in the Arab countries.

The conference was motivated by the increasing lack of tolerance displayed by violent Islamists in their efforts to deprive the Christian sects, which until now were part of the Arab national identity, of their right to religious and physical existence in the Islamic territories of the Middle East. Syrian novelist Colette Khoury said that Syrian Christians could no longer be silent. They would no longer be the victims of the situation in Syria caused by the Islamist takeover and its political agenda. She said that the Christians in Syria would do whatever necessary to prevent the disintegration of Syria as their homeland and keep it from falling into the hands of the Islamists. She accused the United States of apathy and indifference to the fate of the Christians, who had always been a target for Islamist extermination.

In fact, the spread of Islamism throughout the Middle East has accelerated since the days of Muhammad. In the seventh century, Islamic jihad fighters overcame the Persian and Byzantine Empires, after they had exhausted one another in battle, and conquered Christian Egypt as well. The Christians remaining in the resulting Islamic Caliphate were regarded as second class citizens, dhimmis, with their rights, especially political rights, restricted and paid taxes no Muslim had to pay (jizya), retaining that status for hundreds of years.

The Crusades temporarily bolstered the position of the Christians in the Middle East, once Jerusalem had been liberated from Islamic occupation. However, the Crusader state was abandoned by its supporters after less than a century and receded into the mists of Middle Eastern history. In the 12th century Saladin defeated the Crusaders at the Battle of Hattin, effectively ending European presence, and the Christians were subsequently beaten and returned to their historic status as dhimmis, dependent on the mercies of various Islamic rulers.

Since the collapse of the Crusader state and the reconquest of the region by Islam, Christians have lived in uncertainty, in an atmosphere of hostility and discrimination and in fear of extermination, new emigrating from the Middle East in an ever-increasing tide. Coptic churches in Egypt are torched by Muslims so often it is barely reported by the news, and the Copts themselves are subjected to deadly attacks by Muslim mobs that kill the men and violate the women. The same is true of Christian communities in Iraq, Syria, Lebanon, the West Bank and the Gaza Strip.

The artificial establishment of new states in the wake of the Ottoman Empire's downfall of (creations of the Sykes-Picot Agreement of May 1916) was a new Christian illusion. The dissolution of the Ottoman Empire led to the renewed involvement of Christians in the political life of the newly created national Arab states, which came into existence by the stroke of pen to erase the Empire's militant Islamic base and introduce a sense of pan-Arab nationalism to protect all the local sects, religions and ethnic groups.

The recent so-called Arab Spring shattered the illusion of the Arab nation (qawmiyya) and national Arab homelands (wataniyya) and restored the runaway horses of reaction, violent extremist Islamist nationalism (ummah) and the Caliphate. Extreme Islamists decided the time was right to settle accounts with the Christians who collaborated with the secular regimes in an attempt to create a national alternative to Islamist rule and its mission to take over the world. The Christians in the West Bank, mainly in Bethlehem and the Gaza Strip, suffered a similar fate after the United States brokered an Israeli withdrawal.

The attempts of the Palestinians to invade Jerusalem, the capital of the State of Israel, are repelled by the Israeli security forces. Therefore, the Christian churches and the few remaining Christians in united Jerusalem are as safe and secure as its synagogues and mosques, its Jews and Arabs. The government of Israel preserves freedom of religious worship and the sensitive status quo of all the city's residents. The Israel Police Force prevents the occasional attempts made by the Muslim Brotherhood, led by Sheikh Ra'ed Salah, to "represent" and take over Christian property and holy places, especially in Jerusalem and Nazareth.

The "Palestinian Jesus" and Western Betrayal

Radical Islamist operatives, not content with attacks on the lives and property of Christian and Jewish "infidels," have now turned their efforts to undermining the foundations of the Christian and Jewish faiths. They have always claimed that the Jews are the descendants of pigs and monkey, that they forged the Bible and were cursed by Allah to be persecuted, and that they certainly do not have the right to a country of their own. The so-called "Zionists" in Israel ("Palestine") are not even Jews, they claim, but imposters. In their eagerness to vilify the Jews they conveniently ignore the passages in the Qur'an that give the Jews exclusive, divine right to Jerusalem and the Land of Israel. They ignore the fact that Muhammad changed the direction of prayer from Jerusalem to Mecca and they deny the Islamic interpretation that the holiness of Jerusalem is a Jewish concept and forbidden to Muslims (Israilyat). To deny the historic rights of the Jewish people to Israel and Jerusalem, Islamic clerics claim that Jesus was a Palestinian and that the existence of Second Temple is a Zionist fabrication.

The Muslim Brotherhood not only attacks lives and property, it also wants to negate Christian spirit and faith, one of whose pillars is Jesus' work as a reformer – for example when he threw the money-lenders out of the Temple. By denying the existence of the Jewish Temple and calling it a "Jewish fake, they deny Jesus and crucify him again. In one of their recent protest demonstrations, the Muslim Brotherhood in Suez held signs proclaiming that their firm opposition to the interim government was part of their plan to liberate Jerusalem from the hands of the "infidels."

Anyone who denies that Jerusalem is the capital of the Jews and ignores the Temple Mount, the Jews' most holy place cannot continue believing in Jesus, and thus crudely rejects the entire Christian faith. At no time in its history was Jerusalem ever the capital of any people other than the Jews, it was the Jewish capital before the existence of Athens or Rome, London, Paris or Washington. There was never a Palestinian state in the Land of Israel. The Land of the Jews was conquered again and again, but it was liberated in the last century by the Jews. The newly created and basically non-existent "Palestinian people" is not so much as mentioned in the Qur'an, but the Jews are, and they are called the exclusive heirs of the Land of Israel. There is no precedent in Islam for a holy city as state capital. Mecca, which is sacred to Islam, is not Saudi Arabia's capital. Riyadh is. That is known to every Muslim who faces Mecca when he prays on the Temple Mount, and turning his rear end to the remains of the holy Second Jewish Temple. Jesus, who brought the world Christianity, began as a reformer in the Holy Land, that is, Israel. That is not only a tenet of the Christian faith, it is also a historical fact, but it is denied by the Muslims in their efforts to expel both Christians and Jews from the Middle East as they wage their jihad to take over the world.

Radical Islamism has its own code of action, taken directly from the actions of Muhammad as described in the Qur'an and in the oral tradition (sira and hadith). As far as the Islamists are concerned, the Qur'an contains the solution for every problem, they only have to adapt what is written to current needs. By analogy, for the Muslim Brotherhood and other Islamists, the State of Israel represents the Jewish community living in Khaybar in the Arabian Peninsula, slaughtered by Muhammad in the seventh century and buried in a mass grave in the city of Al-Madinah. By analogy, the Islamists feel compelled to destroy the State of Israel today. Its existence as an ally of the West represents the European Crusader state destroyed by Saladin. Thus, by denying both history and the tenets of Christian and Jewish faith, along with the physical destruction of the Jews in Israel and the Christians in the Middle East in general, the Islamist ideologues wage their jihad for the Islamic takeover of the world, while the leadership of the Western world closes its eyes to the seriousness of the threat.

From the Vatican Back to Khaybar

Looking at the monumental Hagia Sophia in Istanbul, a church turned into a mosque, it is hard to believe that Turkey was once the Eastern Christian Byzantine Empire and that it converted to Islam. For its prime minister, Recep Tayyip Erdogan, a sworn Islamist and Muslim Brotherhood supporter, the megalomanic Islamic desire to take over the world is not a personal interpretation; it is a grand Islamic plan. The persecution of Christians and Jews and their expulsion from Islamic territories is an Islamic religious imperative to which Erdogan is committed, as are the rest of leaders of the Muslim Brotherhood and the other radical Islamist terrorist organizations.

For the Muslim Brotherhood and ideologues like Erdogan, the mission of "cleansing" the Middle East of the Christians and Jews is entirely within the bounds of the possible and will promote the Islamic mission begun by the followers of Muhammad. As the Byzantines were destroyed and converted to Islam, so will the Europeans be destroyed and converted, and eventually the Americans, north and south, as well. The tunnel recently dug under the Bosphorus linking Turkey to Europe is symbolic of the age-old Islamic desire to conquer the Holy Roman Empire, especially Rome and the Vatican to include Europe in Islam.

If Turkey is allowed to join the EU it will accelerate the inevitable Islamization of Europe. It will accelerate the emigration of Turks and enable them to unite the already growing Islamic enclaves in the European countries. Radical Islamism is laying the tracks for an Orient Express that will run from Iceland to Iran, its engineers and conductors Islamist terrorists and its shackled passengers Christians and Jews on their way to another mass grave in Al-Madinah.

Palestine, no palistan is secondary to the fact that real, live people are getting butchered by muslims in west Africa - simply because they are not muslim.

Thank you for this timely article

I have been sending the religion editor of our local newspaper the news about Christian persecution in the Mid-East on a routine basis. This article will provide him with a framework of facts that I doubt he knows. Nice work, Dr. Berko.

The author reveals his biases and diminishes himself and his argument by the nonsense about there being no Palestine or Palestinians.