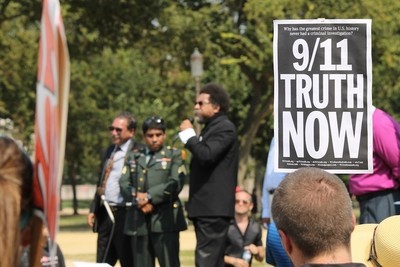 He is one of the nation's most visible academics, making frequent television appearances and speaking throughout the country as part of Tavis Smiley's speaker's bureau.

Cornel West, now listed as a Princeton University emeritus professor, also straddles a line in which he does not espouse conspiracy theories about the 9/11 attacks, but he openly encourages those who do.

The latest example came Wednesday, when West addressed tens of people at what originally was billed as a "Million Muslim March" on the Washington Mall.

When asked directly, West acknowledges that Osama bin Laden "had something to do" with the 9/11 attacks, but he stresses the need to listen to the conspiracy theorists and keep an open mind.

West followed a parade of speakers pushing conspiracy theories that the World Trade Center towers collapsed due to controlled explosions and doubting that an airplane really crashed into the Pentagon.

One speaker represented Architects and Engineers for 9/11 Truth, which also had an information table at the rally. Another, Sheila Casey, was introduced as a journalist and activist. Casey laid out several aspects of the 9/11 Truth movement, doubting that the twin towers collapsed due to fire. "Fire," she noted, "burns up. Fire does not burn down. Intelligent people should know this."

She repeatedly expressed disdain for the overwhelming majority of Americans who believe al-Qaida was responsible for the 9/11 attacks. Yet, she seemed hurt by the reaction her ideas generate and oblivious to the irony in her statement:

"Yet in the United States, in the year 2013 we find ourselves in the absurd position of having almost all politicians, almost the entire media – both mainstream and alternative – and most of the population acting as if this fairy tale about 9/11 makes perfect sense. And making fun of anyone who disagrees."

The 9/11 attacks have been thoroughly investigated. The hijackers were seen on video going through airport security lines. And West is correct in saying bin Laden admitted being responsible. A good compendium of articles and videos explaining why the buildings collapsed, and why the conspiracy theories are baseless, can be seen here.

The rally was organized by the American Muslim Political Action Committee (AMPAC). It promised a rally emphasizing "the lack of transparency and questions plaguing 9/11, steady erosion of domestic civil liberties, drone policy and the very dire effect of these on of plight of American Muslims here at home, and Muslim communities globally in the scope of U.S. imperialism, and the modern face of resistance to unmanned aerial surveillance and warfare."

Among its stated positions: "The American Third Position exists to represent the political interests of White Americans."

When it came his turn to speak, West did not take issue with anything said before him. Rather, he called it "a blessing to be here today … let me tell you there's no other place I'd want to be than right here."

He never directly espoused the 9/11 Truth conspiracies, but he did offer support to those pushing the ideas.

"We are here because we want to stand for moral consistency and ethical integrity," he said. "We want to follow the truth where ever it goes and sometimes that makes it painful. It means you have to cut against the grain. Some of you all were saying, 'Well, we wish we had a million people.' And I said, 'It doesn't bother me. I'm not here for the quantity of the population, I'm here for the quality of the message."

But the message from Wednesday's speakers was empty. If asked directly, West acknowledges that Osama bin Laden took responsibility for the 9/11 attacks, but does not rule out deeper conspiracies. In a video posted in 2011, he said "I do believe in listening to voices that often times are dissenting voices."

He was interviewed by Dan Joseph from the Media Research Center at Wednesday's rally.

Joseph: Do you believe personally that it was Muslims who attacked who attacked us on 9/11?
West: That's a good question.

Dan Joseph: But not a hard question.

West: From what I see, I think that certainly bin Laden said he did it and had connections. And that provides some evidence, but I'm also open to the conversation … But I think bin Laden had something to do with it.

Wednesday's rally was small and inconsequential. West's presence, however, gave it some star power. It is not clear why West enables this fringe movement, especially when he seems to acknowledge they haven't made their case. September 11 is a painful day for Americans, especially for those who survived or lost loved ones. West chose poorly when he agreed to spend it with people who believe al-Qaida terrorism , spelled out in plain language, is "a fairy tale."

Have all the 911 theories faded away?

No mention of "physics" or "science" in the article.

Whether or not airliners less than 200 tons with 30 tons of jet fuel could destroy skyscrapers 2,000 times their own mass should have been resolved in 2002.

After TWELVE YEARS the real issue is why people claiming to be "scientists" didn't settle this long ago.

Cornel West, worth talking with

There are bad guys in the world, I don't think he's one of them. Interesting guy actually, someone I'd invite to dinner. (sorry, late to story and comment)

What's wrong with asking questions about 9-11? The narrative has too many holes

I find it unusual that the author felt he had to explain the following: " The 9/11 attacks have been thoroughly investigated. The hijackers were seen on video going through airport security lines. And West is correct in saying bin Ladenadmitted being responsible. A good compendium of articles and videos explaining why the buildings collapsed, and why the conspiracy theories are baseless, can be seen here."

If it's so self evident, why do you have to give us a quick refresher? Why do you feel you need to reiterate the "official" narrative? The answers provided by the government for 9-11 are totally unsatisfactory to anyone who even spends a few minutes investigating 9-11.

The official story is an ad-hoc facade, and a very thin explanation for events that really don't ad up. One must quiet one's mind, and force oneself to not ask the obvious in order to accept the official story.

It's totally natural to wonder, and ask what really happened for the simple reason that 2 buildings where hit by jet liners at the world trade center, yet three high rise buildings collapsed in free fall. When you see WTC 7 fall for no apparent reason, and you cannot find one mention of WTC in the 9-11 report, you have to conclude that a large portion of the truth has been left out.

Call me crazy for questioning, I know it's fashionable to humiliate anyone who doesn't tow the line, but I won't turn off my brain just because the defenders of the official narrative has nasty retorts to dispense to those with questions. It doesn't bother me.

College Professors should be held accountable - thanks Todd Charske

I think these college Professors get so tenured and untouchable that they think they can;t be touched they can do anything without recourse. Really is he for real?