Analysis: The Regional Implications of a U.S. Strike on Syria 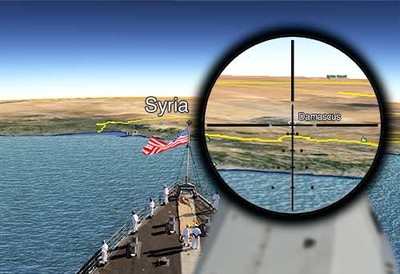 At the time of this writing, the United States appears to be making final preparations for a military strike on Syria in response to a chemical massacre perpetrated by the Assad regime against hundreds of civilians living in rebel-held suburbs of Damascus.

U.S.-led military action in Syria would represent a shift in the willingness by the Washington-led bloc of the international community to confront Bashar al-Assad's regime, though the planned strikes are highly unlikely to topple it.

Instead, it is reasonable to expect a painful slap to the regime, to serve as a punishment and a deterrent against future use of weapons of mass destruction.

A failure by the international community to respond to last week's atrocities would be interpreted by the Iran-led Shi'ite axis – of which Syria is a central part – as a green light for further WMD attacks.

That would be a highly dangerous development, due to the increasingly radical and erratic actions of Syria, and its willingness to use unconventional weapons.

Furthermore, Iran, which sees Syria as a strategic forward province, is helping to orchestrate Assad's war, and would be encouraged by Western inaction to continue sponsoring and arming terrorists all over the Middle East, while developing its nuclear program.

Military action will send an important message of deterrence to Assad's backers in Tehran, as well as to Hizballah in Lebanon, whose fighters have helped keep the Syrian regime alive.

In recent days, Syrian and Iranian officials have issued a series of threats designed to deter a punitive strike, asserting, for example, a U.S. attack will create "a ball of fire that would burn not only Syria but the whole Middle East." One Syrian spokesman claimed Israel would be the "first victim" of a U.S. attack on Syria, and that Israel will "come under fire" in the event of a strike. Such statements have been routinely issued by Iran and Syria in the past.

Although they can't be entirely dismissed, these threats stand little chance of materializing. Any direct Syrian retribution attack on Israel will jeopardize the Assad regime's very existence.

In light of the fact that Assad is likely to survive an American military move, it would make no sense for him to take a step that will all but ensure his demise by provoking an Israeli response.

Nevertheless, in the Middle East, irrational steps can never be ruled out.

Some Israeli defense observers say Assad's willingness to use chemical weapons on the scale of last week's attack is a sign of existential distress.

The rebels have been making gains in the Damascus region, in Allepo, and the northern Allawite region of Latakia, the latter being an area slated to form a Tehran-backed, Hizballah-protected Allawite state in the event of a regime collapse.

According to reports by the Syrian National Opposition Council, the 155th Brigade of the Syrian army's elite Fourth Armored Division – commanded by the notoriously ruthless Maher Assad, brother of the Syrian president – fired dozens of chemical rockets from its base on Mount Qalamoun, north of Damascus.

The rockets exploded in multiple residential areas, resulting in the now notorious video images of children, women, and men dying a slow and painful death, and lined-up corpses in makeshift morgues that lack any apparent physical injury – a telltale sign of a chemical attack.

On the other side of the divide, radical al-Qaida-affiliated Sunni organizations are mushrooming in Syria, and are spreading their ideology and reach to other regions such as Lebanon.

The longer the Syrian war drags out, the greater the regional network of radical jihadi organizations, centered in Syria and spreading outwards to neighboring states, will be.

The threat posed to regional and global security by chemical weapons in the hands of al-Qaida would be intolerable.

Radical Sunni groups are not only growing strong in Syria – they've moved into Lebanon, and are engaging the Shi'ite Hizballah in an escalating tit-for-tat war of car bombs and rockets. More than 60 Lebanese have been murdered in sectarian car bombings this month.

All of these developments point to the growing destabilization of the region, due to the war raging in Syria. The destabilization effect is fuelled further by the use of unconventional weapons.

Just as terrorism and extremism are seeping out of Syria, chemical arms and their use, if left unchecked, can spread beyond Syria's borders and wreak havoc.

What Convention Does The West Want To Lose By?

We need to look closely at what this is saying. The account indicates the Arabs are using methods which are acceptable among themselves. The concept of "Human Shields" does not apply. If Western funded and training mercenaries are hiding among and fighting from the midst of inhabited sectors of Damascus, any and all forces will use any and all weapons against them, regardless of banal western TV coverage of victims.
The Arabs have NOT forgotten what war is and they are fighting it.
In the West, people assume there has to be some 'PGR Rating' or the like, "Beyond which civilised nations will not step." Yeah sure. Losers always complain when they lose.
What may or may not be happening in Syria, as between also the Arabs and Israel, is not the santised play war the West wants. Real intestines ooze from real bodies and real people drown in their own vomit.
It's called War?

the rebels are who used chemical weapons

I"m pretty sure that ASAD did not have any reason to do that. So this strike is one of stupidest moves Hussein Obama administration do constantly