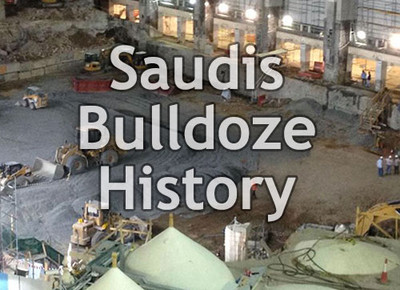 Recent photographs show workers in Saudi Arabia demolishing some of the oldest sections of the Grand Mosque in Mecca, London's Independent reports.

It's the latest in a grand plan to develop and modernize both Mecca and Medina, Islam's two holiest cities, in order to accommodate the growing number of Muslims who make the annual pilgrimage, or hajj.

The Independent, which has chronicled the construction plans and the threat posed to historic structures, obtained pictures showing heavy construction equipment knocking down sections of the Grand Mosque. That includes columns "inscribed with intricate Arabic calligraphy marking the names of the Prophet Muhammad's companions and key moments in his life," the Independent reported. "One column which is believed to have been ripped down is supposed to mark the spot where Muslims believe Muhammad began his heavenly journey on a winged horse, which took him to Jerusalem and heaven in a single night."

A previous story wondered why criticism among Muslims has been relatively muted in the face of "cultural vandalism of breath-taking proportions." Other construction has destroyed sites "with a direct link to the Prophet himself," the Independent's Jerome Taylor reported last fall. More than 300 historical sites have been destroyed during the past 20 years.

Such construction would trigger international rebuke had it been done at the hands of non-Muslims. But this work is being handled by the Saudi BinLadin Group. The project hasn't stirred opposition among Saudi Arabia's puritanical Wahhabi clergy, who view historic preservation as leading to idol worshipping.

Muhammad ibn ʿAbd al-Wahhab, the Islamic sect's 18th century founder, held that everything that did not exist at the time of Muhammad was forbidden and preached against turning the graves of prophets and saints into venerated tombs.

But Irfan al-Alawi, executive director of the Islamic Heritage Research Foundation, told the Independent that the changes gut sections indicating where the Muslim prophet Muhammad prayed. "The historical record is being deleted," he said. "A new Muslim would never have a clue because there's nothing marking these locations now. There are ways you could expand Mecca and Medina while protecting the historical heritage of the mosque itself and the surrounding sites."

Turkey's culture minister did balk at the destruction of the 18th century Ottoman Ajyad castle in 2002. It was knocked down to make way for the 1,972-foot-tall Abraj al-Bait tower, which opened last year and looms over the Grand Mosque that surrounds the Kaaba, believed by Muslims to have been built by Abraham and his son Ishmael.

Minister Istemihan Talay called the move an "act of barbarism," saying the castle was "one of the cultural heritages of Mankind, and its destruction is no different from pulling down of the Buddha Monuments in Afghanistan."

Saudi Arabia told Turkey to butt out, saying it was a matter of Saudi sovereignty, and promising the rebuild the fortress elsewhere.

The Organization of Islamic Cooperation (OIC) continues to push for international blasphemy laws, criminalizing speech it considers insulting or offensive to Islam. Deadly protests break out throughout the world in response to such perceived insults, or if the Quran is considered desecrated. But Alawi seems to be one of few voices expressing concern about the destruction of Muslim historical sites.

Alawi made the same point last fall: "Muslim silence over the destruction of Mecca and Medina is both disastrous and hypocritical," he said. "The recent movie about the Prophet Mohamed caused worldwide protests… and yet the destruction of the Prophet's birthplace, where he prayed and founded Islam has been allowed to continue without any criticism."

With millions of Muslims making hajj each year – about 12 million now, growing to about 17 million by 2025 – some renovation and expansion makes sense, Hatoon Al Fassi, a Mecca native and history professor at Riyadh's King Saud University, told France 24 last fall. But there should be a balance.

"During the last three decades, construction work to expand the mosque has already destroyed about two thirds of the sacred mosque's historical buildings," Fassi said. "The Ottoman galleries are the greatest treasure of the remaining third. We have already lost the houses of the Prophet's companions, as well as smaller mosques around the main mosque that dated back to the earliest years of the Islamic era. And, while the house in which the Prophet was born has been transformed into a library, other sites have suffered worse fates: for instance, the house of Khadija, the Prophet's first wife and the mother of his children, was destroyed in order to build public toilets!"

Israeli control of Muslim holy sites was a cause for the Muslim Brotherhood to call for a "holy jihad" in October. Actual Saudi destruction of historic and holy sites sparks a collective yawn. And they're not done, the Independent's Taylor reported. Illustrations for expanding the main Mecca mosque indicated the area believed to be Muhammad's birthplace – literally the birthplace of Islam – appears removed. He called the Saudis for comment, but they declined.

Provided the Islamic masses remain silent about massive violations of basic human rights by Muslim clerics, they will never achieve to secure those very same rights it took the West hundreds of years to achieve. The Muslim leaders simply keep sectarian hatred and racism alive to keep themselves in power; to the detriment of Islam, all mankind's heritage and objective historical truth. Will Islam survive? (Perhaps, but with the fall of modern civilization.) Will it preserve the honor of Monotheism and God given human rights? (not without major changes and a major enlightenment period-much like what happened with Christianity bottoming out during the Crusades and Spanish Inquisition to finally grow up and enter enlightenment and gave all people secular freedoms that ALL human being are entitled too (i.e. freedom of religion; no matter one's past).

As long as the West guarantees the Saudi absolute autocratic and theocratic ruling dynasties safety and territorial security, they will do whatever they want and get away with it.