Behind the Lines: Conquest through proselytizing
A new documentary says Muslim Brotherhood networks wish to turn the US into an Islamic state. 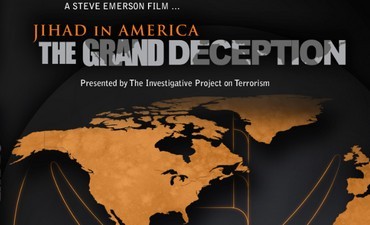 A new documentary exposing an extensive Muslim Brotherhood network in the United States and systematic attempts by members to disguise its existence has been released.

Jihad in America: The Grand Deception shines a spotlight on an area that traditional media outlets have been fearful of exploring, filmmaker Steve Emerson, an investigative journalist and terrorism expert, told The Jerusalem Post this week.

The focus of the film is the shadowy world of Muslim Brotherhood front groups that market themselves as religious civil liberty organizations but are guided by a covert agenda of gradually converting the US into an Islamic country.

The movie features secret recordings of closed-door speeches by a number of Islamist figures in the US. The recordings include shocking messages expressing the speakers' desire to Islamize the US and change its constitution to Shari'a (Islamic law).

"It's a stealth jihad. They're using our values in a manner that's very legal," Emerson says of the groups he investigated. "Their real agenda is stated behind closed doors: To transform the US into a part of the caliphate and to make this a Muslim country."

Emerson stresses that the movie "is not about Islam the faith. We're talking about political Islamism, the Muslim Brotherhood.

That's not to be conflated with Islam in general or all Muslims."

Emerson adds that Muslim Brotherhood leaders based in America "know how to use our systems of laws for their purpose. They openly talk about twisting the system because we're such a tolerant country."

The film documents the start of the Muslim Brotherhood in 1920s Egypt, its clash with the Egyptian state, its move to Saudi Arabia and subsequent spread around the world, with a focus on the US.

It features several well-informed and captivating sources on the movement, such as Nathan Garrett, a former FBI agent and federal prosecutor who investigated the Muslim Brotherhood over several years.

"The Muslim Brotherhood is an international movement, the goal of which is to create an Islamic state universally, all over the world.

The Muslim Brotherhood operates in various countries around the world and, as we learned in the course of our investigation and our work, the United States was one of those," Garrett says on camera.

Kamal Helbawy, a Western Muslim Brotherhood leader, is the only member of the movement who agreed to be interviewed.

"I give him credit for appearing," Emerson says. "He tried to believe no one ever had tapes from behind closed doors. Again, that's the major shock in watching this film – the juxtaposition of what these groups say in public and in private."

The Muslim Brotherhood's US infrastructure has links to its counterpart in Egypt, Emerson says. "They have a joint agenda, and that increases their leverage on the White House," he adds.

Emerson says it is not the job of law enforcement to tackle the challenge, but rather that of the media and non-governmental organizations.

"The FBI's role is not to serve as a lie-detector test. It's to stop criminal plots, or solve them. You don't go to jail for lying to the American public.

It's up to the media and nonprofits, just as they outed David Duke and the KKK and delegitimized them. But unfortunately, the [Muslim Brotherhood] groups have been able to co-opt the media or engage them as ideological collaborators by pretending to serve as religious civil rights groups when they are, in fact, anything but," says Emerson.

Islamist groups use the threat of labeling those who challenge them as Islamophobic with devastating efficiency, he adds.

They have also been able to deceive law enforcement, local and federal government and even Hollywood directors, Emerson argues. His film backs up these charges with hard evidence.

Asked how he was able to penetrate the groups he investigated, Emerson says, "I've been very fortunate to achieve this capability of acquiring information. I can't get into specifics – I can't endanger them [the inside sources]. They're more likely to come to me if they're ideologically predisposed than to the FBI, because they know I will not force them to testify."

Ex-Islamist militant Abdur-Rahman Muhammad says in the film, "There's some good people in these organizations.

And a lot of them, themselves, don't even know the inner workings of the Brotherhood. But you have to know the personalities who founded these things. You have to look at what they were calling themselves before they changed the name. You have to follow the paper trail."

The film includes a 90-second clip featuring a 2010 House Judiciary Committee in which US Attorney-General Eric Holder refused to name radical Islam as the common factor behind the previous 20 attacks on the United States.

Emerson says it is a "stunning piece of video," adding, "In the same way, you have the Department of Homeland Security appointing members of the Muslim Brotherhood and issuing alerts that there's no common denominator behind the attacks."

Asked why none of the groups featured in the film responded to the movie, Emerson says that after realizing that their speeches had been recorded, "They knew they couldn't win.

My husband Bennett Dobbin and I have been impressed with Steve Emerson's steadfastness in tracking enemies of the US, Israel, and Jews. Unfortunately, the current administration is turning a 'blind eye' to the problems militant Muslims are causing on college campuses. Even here in Boca Raton at FAU, radical Muslims flaunt their presence and often interact with naive students are are uninformed of their subversive intent while appearing to be benign. Barbara a Dobbin