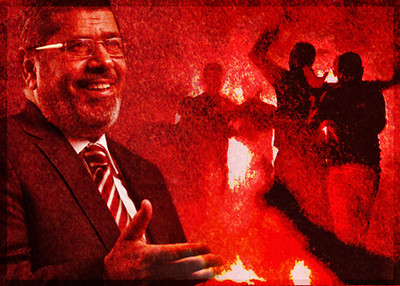 It's the latest in a series of clashes since Morsi, a longtime Brotherhood official, issued a Nov. 22 decree effectively placing himself above judicial oversight. He has said he will nullify it if voters approve a Dec. 15 referendum ratifying a controversial new draft constitution rammed through an Islamist-dominated assembly early Friday.

Although the document declares a right to freedom of speech, it also includes a prohibition on "insults" to "religious prophets." Another provision would require government authorization to operate a website.

Wednesday's clashes targeted several hundred anti-Morsi protesters who had camped out near the presidential palace.

Demonstrators say they will do everything possible to defeat the referendum. "Our marches are against tyranny … and we won't retract our position," Hussein Abdel Ghany, a spokesman for the protesters, said Tuesday. Eleven newspapers shut themselves down Tuesday to protest Morsi's "dictatorship," and banks said they would close three hours early in solidarity with the protesters.

The New York Times reported that Morsi's Freedom and Justice Party warned three former presidential candidates, among them Amr Moussa and Mohammed ElBaradei, that they would be held accountable for any violence that occurred.

Egyptian riot police fired tear gas at demonstrators near the presidential palace in Cairo on Tuesday. Officials in Morsi's office said the Islamist leader fled the palace as protesters broke through police lines.

While Egyptians take to the streets to oppose what they claim is a nascent tyranny, Morsi and his Islamist government can count on support from the Council on American-Islamic Relations (CAIR). For example, CAIR-Los Angeles boss Hussam Ayloush praised Morsi for assuming more power in order to prevent "corrupt judges" from the "undermining and undoing of every democratic step."

In a Facebook post, Ayloush blamed Egypt's internal strife on the secular opposition: "Much of the Egyptian opposition seem to be more interested in opposing Morsi and the MB than actually helping Egypt become a stable and institutional democracy,"

CAIR-San Francisco chief Zahra Billoo dismissed American concerns that the Islamist-backed draft constitution wouldn't protect human rights. "Why do we care about what the Egyptian Constitution says about indefinite detention, when it is being practiced by the U.S. government?" she wrote in a Twitter post Monday.

Several oceans away in Tahrir Square, Egyptian women see things very differently. They charge that the Brotherhood is "paying gangs to go out and rape women and beat men" protesting Morsi's policies.

Female protesters in Tahrir Square provided harrowing accounts of sexual assaults they say were carried out by thugs on the Islamist group's payroll.

A protester identified as Yasmine said she had been at Tahrir Square for several hours filming a recent demonstration when she was suddenly surrounded by 50 men who grabbed her breasts, ripped off her clothes and assaulted her. Men who tried to come to her rescue were beaten away by the mob, but she eventually managed to escape. Yasmine suffered internal injuries and was unable to walk for a week.

A journalist named Afaf el-Sayed said that while protesting at the square just over a month ago, she was attacked by a group of men she claims were "thugs from the Muslim Brotherhood."

While the frequency of these assaults is unclear, "activists have reported nearly 20 attacks in the last ten days and say there has been a dramatic increase in mob sex attacks in the past year," the British Daily Mail reported Saturday.

Writing in the Egyptian newspaper al-Arab al-Yahm, journalist Fathi Khattab charged that Brotherhood militias were behind recent attacks on other prominent Egyptians, including a recent beating of former presidential candidate Abu al-Ezz al-Hariri.

After the ouster of longtime strongman Hosni Mubarak last year, the Brotherhood asked that the drafting of a new constitution be delayed until a new president was democratically elected. Egypt's interim military rulers agreed to that request, a decision many Egyptians now regret. A poll conducted Nov. 28-29 by the Egyptian Center for Public Opinion Research found that 57 percent of Egyptians are satisfied with Morsi's performance in office. While that's strong, it is down from 78 percent in early October.

Democracy activist Aida Nassif countered that Mubarak's "fake democracy" was superior to "the dictatorship of the current regime."

She said Morsi must "realize that many invasions and governors have come to Egypt trying to dominate it, but the Egyptians have always refused this and made such dictators lose everything."

One prominent Islamist appears to be looking at things the same way.

Kamal Helbawy, formerly a senior Brotherhood official, told the newspaper al-Arab al-Yahm that "[t]he Constitutional Declaration which President Morsi issued will make a new pharaoh, and the decrees open the door to a great evil." He added that Morsi's actions had "plunged the country into a dark tunnel, which may lead to further bloodshed and tragedy."

CAIR a threat to our National Security

CAIR is as much of a threat to the citizens of the United States as it was to those when they supported the Muslim Brotherhood Terrorists in Egypt and now while supporting Hamas Terrorists in the Gaza Strip. CAIR should closely be monitored by our government; CAIR has funded Hamas Terrorists as was proven during the Holy Land Foundation Investigation, now is not the time to let our guard down as CAIR could also be funding Muslim Terrorist cells inside the borders of the United States that are prepared to strike out at American citizens at a moments notice.

Tsk,tsk I must say, is this a suprise to anyone? You continue to do the same things over and over and expect different results. Can anyone say," stuck on stupid?" You reep what you sow.

Morsi's democracy is like one in which two wolves and a lamb vote on what they are going to have for dinner. Without a decent Constitution guaranteeing individual rights, Morsi's vaunted democracy will end up a "gigot" democracy. And with a Sharia only Constitution, it is not only lambs, but infidels that had better be on the alert.