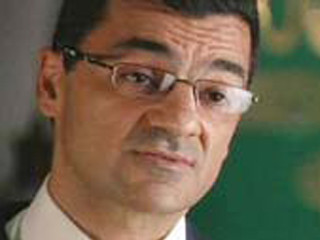 The State Department is vociferously defending its decision to send Muslim Public Affairs Council boss Salam al-Marayati to represent the United States at a recent 10-day human rights conference in Poland. He "has been involved in U.S. government initiatives for almost 10 years and has been a valued and highly credible interlocutor on issues affecting Muslim communities," a State Department spokesman told the Washington Free Beacon, adding that al-Marayati was invited to participate in the meeting "as a reflection of the wide diversity of backgrounds of the American people."

If the al-Marayati choice is any indication, that "diversity" apparently extends to anti-Israel ideologues who attack U.S. terrorism prosecutions, whitewash Hamas war crimes, and portray Iran as a victim of U.S. perfidy. And he runs an organization which opposes key elements of American counter-terror policies, including the drone strike which killed American-born al-Qaida cleric Anwar al-Awlaki, the closing of terror-supporting charities and sting operations against would-be homegrown terrorists.

A year ago, al-Marayati even threatened to sever ties with the U.S. government in a strongly-worded Los Angeles Times op-ed column. Expressing anger over the use of "anti-Muslim" training materials by the FBI and a U.S. Attorney's office, al-Marayati wrote: "If this matter is not immediately addressed, it will undermine the relationship between law enforcement and the Muslim American community—another example of the ineptitude and/or apathy undermining bridges built with care over decades."

In spite of MPAC's hostile view of government policies, administration officials routinely turn to MPAC for policy advice, including the training materials al-Marayati ranted about in the Times. In February, MPAC officials met with FBI Director Robert Mueller to discuss training materials about Islam. That same month, MPAC officials met with top Pentagon leaders to receive an apology over a recent incident involving Quran burnings in Afghanistan.

In 2010, the State Department sent al-Marayati to Paris and Geneva to speak to United Nations groups about religious freedom and free speech.

Don't take our word for it when it comes to al-Marayati's extreme views toward Israel, U.S. policy and law enforcement. Watch and listen to the following examples from al-Marayati's mouth:

"The problem in the case of Iran is that it is singled out as the threat. We [the U.S.] don't want to deal with North Korea the same way we deal with Iran," he said. "With other countries, we utilize the IAEA, we use multilateral instruments to deal with the nuclear problem. In this case of Iran, there is no dialogue, there is (sic) no negotiations, it is all confrontational policies that is (sic) part of a war-mongering mentality here in the U.S. and they're just waiting for the tripwire and then the machinery of war will begin."

Al-Marayati also suggested that Israel is controlling U.S. foreign policy. "The other point here, which is very important historically, the United States has done a lot of dirty work that has served the interests of Israel," he said. "It destroyed Iraq. It supported the destruction and crippling of Egypt. It has crippled the Gulf. And now, it is looking to Iran as the next target for crippling and destroying. I think this is madness. Who is driving our foreign policy - President Obama or Prime Minister Netanyahu?"

"We're against Holocaust denial, but we're also against people who exploit that as a way of shoving this kind of war propaganda and dehumanization of the Arab peoples and the Muslim peoples as if they have to pay the price for what Nazi Germany did to the Jews back in the 20th century."

Al-Marayati called Al-Arian "the gentleman who defied the odds in a system that is unfair, and there is no way you can get a fair trial in view of any of these issues today. But regardless, he was able to defy the odds and he was acquitted of all the terrorism charges that were levied against him."

One month later, Al-Arian pleaded guilty to a charge of conspiring to provide services to the Palestinian Islamic Jihad, a designated terrorist organization, in violation of U.S. law.

"You laughed when you heard about the bombings" carried out by the PIJ, U.S. District Judge James Moody told Al-Arian in pronouncing sentence, calling him a "master manipulator."

This disaster resulted in the convictions of the Hayats on charges of providing material support to al-Qaida and making false statements. Hamid Hayat was sentenced to 24 years in prison.

The four men convicted in the plot were convicted and sentenced to 25-year prison terms.

At a minimum, Marayati's long record of whitewashing terrorism, trivializing the Holocaust, and denigrating law enforcement's work in protecting Americans from jihadist terror raises serious questions about the State Department's judgment in deciding who should represent the United States abroad. Making taxpayers foot the bill to send the likes of Marayati overseas is the height of folly and legitimizes an official and his organization that often works against the same government that legitimizes it with such significant access.

Taliban is not interested in peace, only in your submission to sharia.

What is the use of talking about peace to a group that is not interested in peace but only your submission to sharia law. That would require killing anyone who criticizes Islam or Mohammed, killing homosexuals, cutting off the hands and feet of anyone accused of stealing, stoning to death adulterers, killing apostates, and lashing girls who have been raped. This is a group that hunts down and attempts to kill a 14 year old girl because she didn't want to be excluded from school. I wouldn't talk to them. They are evil. I would kill them.

America doesn't "love" war. It hates war. But it loves freedom so much that it is willing to go to war to defend it.

The Russians have made great advances in their demonization of the US; their arguments appeal especially to those of the far left. Your comment seems to reflect that you have swallowed that garbage. See; Pacepa, Propaganda Redux,

"Sowing the seeds of anti-Americanism by discrediting the American president was one of the main tasks of the Soviet-bloc intelligence community during the years I worked at its top levels. This same strategy is at work today, but it is regarded as bad manners to point out the Soviet parallels. For communists, only the leader counted, no matter the country, friend or foe. At home, they deified their own ruler -- as to a certain extent still holds true in Russia. Abroad, they asserted that a fish starts smelling from the head, and they did everything in their power to make the head of the Free World stink. " "http://online.wsj.com/article/SB118645110306090056.html

The left has been soft putty in their hands.

Is Obama not the Manchurian Candidate but eh Muslim Brotherhood Candidate?

Obama has embraced the Muslim Brotherhood despite the evidence in the Holy Land Foundation case of their conspiracy, since 1987 to infiltrate our society in order to subvert it. This was taken from a document labeled Explanatory Memorandum on the Strategic Goals of the {Muslim Brotherhood] Group in North America.

In 2005, the Swiss authorities found a document providing a 100 year plan for Islamic World domination.

Frank Gaffney shows instances of Obama's administration selecting people with Muslim Brotherhood ties being placed in senior executive positions in the Department of Defense, the Department of State, Homeland Security and the "Ikhwan have even infiltrated the Republican Party.

In his first speech abroad, in Cairo, Obama asked Mubarak to permit the outlawed Muslim Brotherhood to attend. They sat in the first row. Later, during the Tahrir Square riots, he insisted that Mubarak step down immediately. He was replaced by Morsi, a former leader of the Muslim Brotherhood.

All this leads, including the al-Maryati appointment, up to the question, is Obama not a Manchurian Candidate but a Muslim Brotherhood Candidate?

America is at war with everything from cancer to climate change to terrorism etc. War is America's choice for conflict resolution. It was therefore of interest that the Obama Administration conducted both a military and civilian surge recently in Afghanistan. The civilian surge produced very little in results but there were two efforts that merit attention. One was the work of Carter Malkasian and two was the possible introduction of cotton as an economically viable alternative crop to poppies (see Little America: The War within the War for Afghanistan by Rajiv Chandrasekaran). The cotton idea was buried by obstruction the latter of which seems to the favored means of stalling peacebuilding efforts. The principles of obstruction were, as expected, the drug cartels and the Karsai government but one of the talking points of US Republicans is that any negotiation with terrorists is weakness. Neither Republicans or Democrats want to appear to be "soft" on terrorism so peacebuilding initiative which is dependent on negotiation really does not stand much of chance in American foreign policy. Finally, I read the quotes by Salam al-Marayati and IPT's return criticism and it seemed like Marayati made his points and IPT made its points. America, with its love for War, has committed its own atrocities and so why shouldn't Marayati speak of America's atrocities?