Guest Column: The Dangerous Lie Of The Hijab 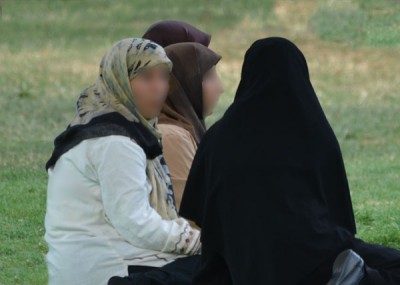 As the number of converts to Islam grows around the world, little is more surprising than the fact that the vast majority of those converts are women – by some counts, as many as four times the number of women in the United States as men. And over and over, as if reciting dogma, these women offer the same bizarre explanation: Islam, they say, with its "modest" dress code, frees them from the "oppression" of Western society and a culture that judges women on their looks alone. It is, in fact, as if they have bought into the religion not for its precepts, but for its costumes.

Perhaps you could even believe their reasoning if most of these women actually dressed in full chador or burqa. But they don't. Rather, they simply cover their heads – and occasionally their bare necks – in hijabs, or headscarves, arguing – with flawed logic and misrepresentations of the principles supporting Western notions of equality and feminism – that even this is a sign of "liberation" as much as it is of their allegiance to a religion.

And evidently, more and more non-Muslims are buying it, especially as legal battles erupt in Europe -- and in some American cities -- over the right to wear a hijab in the public realm.

Latest among them, it seems, are the editors of the International Herald Tribune, who earlier this summer ran an op-ed by Ayesah Nusrat, a self-described "Indian Muslim," defending her decision to don a hijab at the age of 23. (What the editors evidently failed to notice was that the pious young author of the piece lifted all of her ideas and a reasonable portion of her words directly from a previously-published essay by a Canadian Muslim, Naheed Mustafa, which is widely available online,)

Poorly written, speckled with faulty grammar and plagiarized clauses, Nusrat's piece presents a downright bizarre depiction of Western media and public opinion (among other things, she describes Western feminism as being defined by "a skewed perception of women's equality as the right to bare our breasts in public"). Nonetheless, her commentary places in full view of a wide public one of the biggest obstacles we face in combating the growth of Islam in the West, and, even more, of political, aggressively Islamist Islam as it masquerades as a faith – and a doctrine – based on justice and equal rights, slinking its deceitful, theocratic destructiveness into the secular humanism of the West.

And it is exactly that deceit which makes it all so dangerous, especially to young women struggling with their own body image and sexuality: what easier escape, what simpler coping mechanism, than to throw a sheet over your head before heading out in public, and convince yourself that no one either sees what you look like underneath, or cares? (Indeed, Dutch psychiatrist Carla Rus, who works closely with young Muslim women – including converts – notes that the ease of dress and discomfort with cultural emphases on appearance is behind much of the conversion of non-Muslims to Islam, and contributes to the radicalization of Muslim women in Western countries.)

But Islam is not about garments, any more than a hijab actually covers anything but a woman's hair. In fact, to the contrary, a hijab-wearing woman in the West attracts attention to herself merely by the fact of the scarf itself, and to the political statement it really represents: "I am not-you. I am Muslim. I am other, and I reject what is not me." It pronounces the "us" of "us and them" in a gesture of arrogance and isolationism, while ignoring the greater truth of any faith: that it exists in your heart and in your behavior, and no more.

Yet ironically, the women who place Islam in an article of clothing, who choose the so-called "modesty" of Islamic dress, the women one often sees covering their heads, parade along the streets of American and European cities in skin-tight turtlenecks and leggings, the lines of their lace undergarments visible beneath. Or there was the headscarved Dutch-Turkish woman I saw once who, in the jubilant post-game revelry of a soccer match victory pulled down her pants and shoved her cotton-pantied derriere out a car window in The Hague.

"Does that seem normal to you?" I asked an Iraqi friend of mine, who had herself recently stopped wearing a hijab.

Nonetheless, the rampant spread of propaganda like the Herald Tribune piece continues to serve the aims of missionaries for Islam and to falsify the truth of its misogyny not only for women, but for a larger public easily persuaded to tolerate the intolerance of its doctrine. (It is not, after all, the hijab that makes these women free, but the secular, Enlightenment values of the West; where else, after all, would they have the liberty to choose whether or not to wear one – or, for that matter, to convert to Islam, or to leave it? Where else, too, could a woman wearing a hijab stick her naked behind out in public view?)

The truth is that the decision to do anything at all – pray, tithe, fast, or dress – in abeyance to religion is anything but a gesture of "liberation." Liberation, rather, is what you get when you refuse to allow such gestures to define your worth - -either to society, yourself, or our god.

Indeed, hijabs – those, that is, worn for allegedly religious, rather than political reasons – declare a submission to religious mandate (or rather, the belief in one: in truth, the Koran does not call for women to cover their hair, or even their faces and bodies). Nor, either, does it serve to desexualize women, as the high rate of rape in Muslim majority countries makes abundantly obvious. What it does do, however – and what burqas and nikabs especially do -- is dehumanize them, creating faceless beings, property to be sold into marriage, beaten, or battered to death with the pelting of a thousand stones against their heads.

Consequently, the persistent misperceptions, the insistent protests mischaracterizing this symbol of religious and political subservience, these dishonest declarations about sexuality and freedom, echo beyond Nesrat's words; they spread through the willingness of a misguided media and naïve public to other young women at risk of becoming similarly misled. And if we fail now to confront – and combat – such misapprehensions and distortions with the unveiled and naked truth, we will have only ourselves to blame for what becomes of them.

Abigail R. Esman is the author, most recently, of Radical State: How Jihad Is Winning Over Democracy In The West (Praeger, 2010). A columnist at Forbes.com, her articles have also appeared in The New Republic, The Wall Street Journal, Foreign Policy, and others.

At the beginning of this comment I should mention that my English is not very good and therefore I apologize in advance for any mistakes I might have but I hope I can clearly make myself understood.

Hejab is said (by many Mullah in Iran at least where I come form and I heard and read many times) to prevent men from getting sexually agitated. In this chauvinistic view of women, men in the society should be immune from getting sexually agitated which it (from Mullah's view in Iran) potentially could result in immorality. By their definition men and women are should be apart from each other so they don't get in trouble by their sexual desires. and some Ayatollah (Mullah) go as far to say women voice should not be heard by any man but their husband or father and brother. Mullah's in power in Iran have taken actions to make sure this won't happen. For instance, they have separated boys and girls at schools, men and women in public buses and women are not allowed to watch a game in stadiums.

For those who know the Iran's history, they probably remember that Iran before the 1979 was westernized. And just like west, women were free not to wear Hejab. After 1979 however, when Mullahs took power in Iran; they forced women into wearing Hejab and send their thugs to spray acid into face of women who don't obey. Some women's future ruined simply because didn't like Hejab.

In Today's Iran, there is special police force to make sure women wear Hejab. not only that but also to wear Hejab according to Islamic Regime so called "Dress Code." In Iran we are facing a phenomenon that is called gender apartheid. Even any woman foreign politician who visits Iran is forced to cover their head and Iranian men politician are not allowed to hand shake with women politicians in other countries when they visit.

Unfortunately in the west specially politicians don't seem to completely understand Hejab. Foreign politicians wear Hejab when visit Iran as a respect to this so called "Culture." In fact what they respect is not culture but women oppression and gender apartheid.

I think and believe that wearing Hejab is continuing the same gender apartheid existing in Islam. Hejab is not about freedom of dress and cloths. I know that people are free to wear what they like but we should know that Hejab is the symbol of gender apartheid. A Muslim women cover themselves because they think they must cover their hairs and body from being seen by men. Simply because Islam said so although it is not in the Koran.

Women should not be seen in public without their Hejab. and not allowed to come to public again without Hejab according to vast majority of Mullahs in Iran. In that sense off course it is a "Liberation" because otherwise a woman should stay at home. Maybe that what she meant by "Liberation."

We cannot criticize hejab without criticizing religion in general because when you stop thinking and start only believing, one must follow his/her believes; in this case wearing Hejab. Although in other religions we see the same believes practiced For instance, growing beards in Hindu Sikhs or Catholic priest and nuns uniforms. What makes it very different however is that targets half a population on the earth which are women.

you go to be kidding

Who is their "right' be associated with this delusion. Go figure. Well do you remember The Jones Tragedy same mindset applies. Lost minds.

Inaccurate statistics and attention getting devices.

As far as why some Western women decide to wear the hijab, I would argue that it is an attention seeking device. They are not trying to be modest at all. Just the opposite actually. They are trying to bring attention to themselves and then self-righteously condemn anyone questioning their choice of head-dress.

Being paid to wear a hijab

In France, women are being paid the equivalent of $100 monthly to wear a hijab. A very attractive proposition for many women who are empoverished and enemployed.

Always thought the hijab is used by "muslim" youth the same way punk rockers used the Pink/Blue/Green/Red Colored Mohawk hairstyle. "I'm not like you, I'm different, look at me" fits the attitude perfectly.