Who's In Charge Here? Somalia Edition 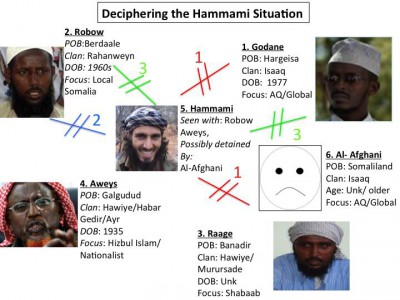 Over at Clint Watts' Selected Wisdom, there's an interesting new report breaking down possible leadership scenarios currently playing out within the Somali jihadist group, al-Shabaab. In it, Watts cites a coterie of Shabaab analysts in an attempt to decipher who is controlling the reigns of the al-Qaida affiliate after a bizarre video appeared online two weeks ago showing one of the group's most prominent American faces, Omar Hammami, pleading for his own life.

Shortly after the "urgentmessage" went public, al-Shabaab issued a statement of its own, denying that Hammami was in harm's way.

The strange scenario begs the question: what is going on within al-Shabaab's ranks? Has there been a split between those more aligned with al-Qaida and global jihad and those more focused on the local Somali insurgency against the Somali government and its allied forces? How could it be that a group most known in the West for its recruitment of Western youth into the ranks of jihad now is turning on the very poster boy of that success—and what does it mean for other foreign recruits?

The post—a follow-up to an earlier piece co-written by Watts and Andrew Lebovich of the New America Foundation—attempts to make sense of recent events on the ground.

The author outlines the strengths and weaknesses of three proposed leadership scenarios and concludes that the final outcome for Hammami, no matter how you slice it, is not looking good.

For more, check out Selected Wisdom.