France's Foreign Minister Alain Juppe claimed that Syria was responsible for the bombing of French peacekeepers in southern Lebanon, using Hizballah to carry out the attack. Both the terrorist organization and its Syrian sponsors have denied the accusation.

"We have strong reason to believe these attacks came from there (Syria)," Juppe said on RFI radio, although France did not yet have complete information about Syrian or Hizballah involvement. The bombing attack wounded 5 peacekeeping troops of the 12,000 in the country, and was seen by Lebanon's opposition as Syrian retaliation for international calls for the resignation of President Bashar al-Assad.

Syria's government called France's accusations a conspiracy theory, and Hizballah accused France of relying on "probability" instead of hard facts. The bombing comes before a U.N. review of the peacekeeping mission, which has failed to stop Hizballah from rearming after its 2006 war with Israel. The foreign troops, including a sizeable European contingent, have also been attacked numerous times by unknown forces. 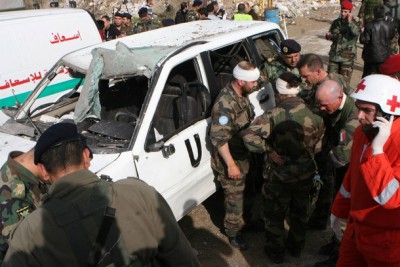