Iran has pursued a "two-pronged approach" to deal with increasing pressure about its nuclear weapons program and its planned assassination of the Saudi ambassador in Washington. "It is threatening to carry out a forceful military strike against the U.S. and its allies if attacked, and even to destroy Israel, while at the same time engaging in diplomatic activity, relying on the support of Russia and China," MEMRI notes.

On Thursday, Iran's Supreme Leader Ali Khamanei threatened "absolute force to any aggression and even to threats," during a speech to at an officers' commencement ceremony at a military academy. Iranian Armed Forces deputy chief of staff Masoud Jazayeri warned a day earlier that "war might break out at any moment," and would not be limited to chaos in the Middle East and strikes on Israel. "Iran holds many cards, which are not limited to the region, and they will be used when the time is right," he added. 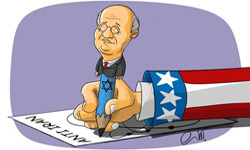 Even harsher threats have been directed at Israel, and many contain an anti-Semitic tone. A report by the semi-official Fars News Agency warned Israel of 30,000 suicide bombers trying to infiltrate its borders. Iranian website Bultan News, which MEMRI describes as close to Iran's intelligence ministry, threatened to obliterate Israel with help from Hamas, Hizballah, and Syria. It also claimed the attack would send Israel's Jews back to Europe, part of a long-standing Iranian policy to deny a Jewish claim to Israel. There are also claims of Israeli "tentacles" leading anti-Iranian terrorist groups, and reports that "pro Zionists, who dominate the US Congress" are responsible for threats to Iran.

Other articles speculate on American conspiracies against Islam and Iran. They claim that America and Israel are conducting a "psychological war on Iran," and that American "divide and rule" tactics are targeting Islam and promoting "Iranophobia."

Rather than counter IAEA claims, Iranian media has accused the agency of "playing into U.S. hands" and argued for a review of Iran's ties to the organization. They have also accused the author of the report, IAEA director-general Yukiya Amano, of being "Washington's Toy."