Abbas Could Be Next Domino to Fall 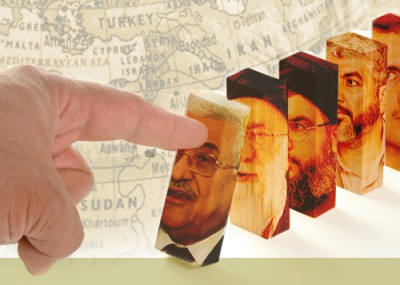 Often overlooked in press coverage of the issue is the problem of corruption in Abbas' PA, including allegations of nepotism, possible theft of U.S. aid dollars, and a scheme that allows Hamas officials in Gaza to illicitly pocket money from electricity ratepayers. Not to mention the fact that two U.S. government agencies are helping support a Palestinian investment fund controlled in part by that terrorist organization.

At a rally in Ramallah several days after the U.N. ploy, Abbas (whose PA receives close to $600 million a year in U.S. aid) sought to link his demand for recognition of a unilateral declaration of independence (UDI) with those of  the "Arab Spring" — the wave of revolutions this year against autocratic regimes in Egypt, Tunisia, Libya, Syria and Yemen.

"We have told the world that there is the Arab Spring, but the Palestinian Spring is here," Abbas declared. "A popular spring, a populist spring, a spring of peaceful struggle that will reach its goal."

The analogy can be charitably described as far-fetched. In countries like Egypt, Libya and Tunisia, the public complained bitterly about corrupt, despotic governments that rewarded political cronies and family members and disregarded the concerns of most of their citizens.

Far from addressing the grievances of the Palestinian "street," Abbas seems to embody the very kind of leader that Arabs from Tunisia to Yemen are trying to overthrow. "The 'Arab Spring' is the result of allowing corrupt autocrats to remain in power," said Jonathan Schanzer of the Foundation for Defense of Democracies.

Washington has sought to prop up leaders like Abbas and deposed Egyptian strongman Hosni Mubarak in order to maintain "stability," he said, because the alternatives (radical Islamist groups like Hamas, the Muslim Brotherhood, and radical Salafists) were considered much worse.

But during the past year, that stability has proven to be an illusion, with U.S.-backed autocrats being toppled in Tunisia and Egypt, and another, Yemeni strongman Ali Abdullah Saleh, facing the prospect of civil war as he clings to power.

Washington finds itself caught in the middle, trying to facilitate peaceful transitions toward democracy without empowering radical Islamists.

Absent dramatic changes, Abbas (whom Schanzer characterizes as "a mini-Mubarak" in his leadership style) could become the next domino to fall in the region. One indication of his weakness was the rally noted above in Ramallah, where the PA sought to mobilize 1 million people in the streets to welcome Abbas. But Palestinian media reports indicate that just 18,000 showed up, many of them local schoolchildren bused in for "a Middle East rent-a-rally," Schanzer said.

Many Palestinians he met during a visit to Ramallah last month are frustrated by corruption in the Palestinian Authority and believe that popular anger over Abbas' failure to act against it could bring down his government.

In 2007, Hamas staged a coup in Gaza that toppled the Fatah regime there in four days. Palestinian businessmen and former government officials have privately expressed concern that the terrorist group could seize power in the West Bank as well.

In April, Abbas, seeking to protect himself against this possibility, signed a Palestinian unity accord with Hamas. He signed a similar unity deal with Hamas in February 2007 – just four months before the Hamas coup toppled his government in Gaza.

"There is a lot of frustration over corrupt government practices" in the PA, Schanzer told the IPT. If West Bank Palestinians conclude that a unilateral declaration of independence by Abbas has not resulted in fundamental reforms, "then an intrafada scenario (a revolt against Abbas' leadership) could occur in the street."

For Abbas, the Palestinian independence issue serves to divert attention from a festering corruption problem that could potentially destabilize his government and bring radical Islamists to power. But his anti-Israel brinksmanship masks some critical weaknesses including his economic and security dependence on the Jewish state.

Palestinian officials and business leaders told Schanzer last month that, were Israel to withdraw its military and economic backing for Abbas, his government would collapse in three months. Tax revenues collected by Israel and transferred to the Palestinian Authority comprise almost half 50 percent of the PA budget.

Similar sentiments were expressed by Jerusalem Post correspondent Khaled Abu Toameh. "Were it not for Israel's presence in the West Bank and its massive crackdown on Hamas there, it's likely that the Islamist movement would have taken over the West Bank a long time ago," he told the IPT in an e-mail. "That assessment is shared even by senior Fatah leaders."

One former member of Abbas' inner circle who went public with these concerns is Fahmi Shabaneh, a member of the PA leader's inner circle until late 2009. Shabaneh, who was forced to quit his job as anti-corruption chief in the PA's General Intelligence Service after exposing a sex scandal involving one of Abbas' top aides, stated last year that the PA boss has surrounded himself with many of the same corrupt officials who had worked for his predecessor Yasser Arafat.

In an interview with the Jerusalem Post, Shabaneh predicted that Hamas will one day take control of the West Bank as it did in Gaza. "Had it not been for the presence of the Israeli authorities in the West Bank, Hamas would have done what they did in the Gaza Strip," he said. "It's hard to find people in the West Bank who support the Palestinian Authority. People are fed up with the financial corruption and mismanagement."

Fatah personnel stole much of a $3.2 million donation from the United States to the group before the 2006 PA elections won by Hamas, Shabaneh said. The money was supposed to be used to bolster Fatah's image and improve its chances of winning the election.

After going public with his allegations, PA security officials raided his home in Jericho, ransacking the house and confiscating many of his personal items. Shortly afterward, Shabaneh dropped out of sight. Today, he lives outside of PA jurisdiction in Jerusalem.

After his death in 2004, the world learned that Arafat   had looted upwards of $1 billion to enrich his cronies. For a time after, there was a measure of financial accountability under PA Finance Minister Salam Fayyad. But more recently, Abbas moved to marginalize Fayyad, who is now serving as PA prime minister, by taking away his oversight responsibilities. Today, Fayyad "is a glorified accountant. He has no power, no oversight," Schanzer told the IPT.

One example is the Palestine Investment Fund (PIF), founded in 2002 to manage PA commercial and financial interests. After Fayyad achieved some early success in "bringing hundreds of millions in commercial assets in the Palestinian budget into the light of day," Schanzer told the House Foreign Affairs Committee Sept. 14, "Abbas changed the charter, installed his own choices for board members, placed the PIF under his full control, and neglected to have PIF audited by outsiders. Today, Prime Minister Fayyad has zero oversight of the PIF, despite his celebrated mandate for transparency."

More recently, Mohammed Dahlan, a former top PA security official, charged that  $1.3 billion has disappeared from the PIF. Dahlan has been a target of corruption allegations from Abbas supporters.

"You have a system created by Arafat. It's corrupt to its core. Some have been forced out, so the old corrupt people are alleging corruption from the new people," Schanzer said.

There are also questions about the extraordinary wealth accumulated by Mahmoud Abbas' sons, Yasser and Tarek.

Yasser Abbas owns Falcon Tobacco, which has a monopoly in the West Bank and Gaza over the marketing of popular U.S.-made cigarette brands, including Kent and Lucky, gaining him millions of dollars. He owns two other companies which received more than $2 million from USAID in recent years. Falcon Electro Mechanical Company got $1.89 million from USAID to build a sewage system in the West Bank town of Hebron. His other firm, First Option Project Construction Management Company, received $300,000 from USAID.

Tarek Abbas, Yasser's younger brother, is general manager of Sky Advertising, recipient of hundreds of thousands of dollars in USAID funding to improve public opinion of the United States in PA-controlled territories.  Tarek's ad agency won a contract from Wataniya, a cell phone company where Yasser Abbas sat on the board. The firm was created with funds from the United States and other international donors.

A former Palestinian Authority official estimated the total value of the property owned by Mahmoud  Abbas and his sons at $10 million, Schanzer told the House Foreign Affairs Committee last month.

Despite the PA's bitter rivalry with Hamas, Abbas and the PA have "secretly allowed the jihadist group to raise funds through an electricity scam," according to Schanzer. In Gaza, electricity is produced by a power plant guaranteed by Abbas' Ramallah-based PA.

Another former PA official told Schanzer that Hamas, which is responsible for collecting money from ratepayers, is supposed to forward the funds to the Palestinian Authority but has not done so. This breach means that U.S. taxpayers who subsidize Abbas' PA are in effect financing Hamas in violation of U.S. law.

The PA government in Ramallah "is not elected. The legislature doesn't meet," Schanzer said. "It has no legitimacy now." Instead of treating Abbas as an ally, he said that Washington should work to "isolate" the PA chairman. The United States needs to conduct a full audit of the PIF; investigate the Hamas-controlled electric power plant in Gaza; take a close look at the PA leader's office budget; and carefully examine the business holdings of his sons, Schanzer said.