A jihad banner welcomed Israeli soccer team Hapoel Tel Aviv to a recent match with Polish squad Legia Warszawa, according to Polish news outlets. The incident is being touted as another worrisome sign of anti-Semitism in Poland, which will host next year's 2012 Euro football championship alongside the Ukraine.

The green banner, which stretched across an entire section behind one goal, simply said "Jihad" and "Legia" in a font resembling Arabic. 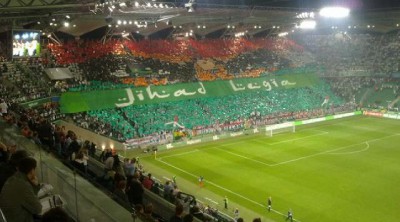 "This is yet another case of anti-Semitic behavior by extremist groups active in Polish football stadiums, and it could have been predicted," said Rafal Pankowski of the Warsaw-based Never Again NGO. "Some Legia fans have been known for anti-Semitic and extreme-right behaviour for years and they had a chance to express their hatred of Jews again when Legia played an Israeli team, this time adopting a pseudo-Islamist guise," he added.

In August, police in Lower Silesia investigated complaints about anti-Semitic chanting from fans of another Polish team. "Jews, Jews, Jews, all of Lodz are Jews," shouted supporters of Slask Wroclaw in a match against Widzew Lodz, before calls of "Auschwitz is your home," and "you're going to the oven." Lodz, the site of ancient Jewish community and a massive Nazi death camp in WWII, was mocked because of the similarity between the team's name, Widzew, and a Polish term for Jews, "Zidzew."