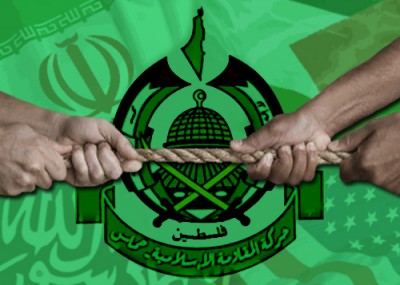 Hamas' rule in Gaza may face new difficulties, with reports emerging about the group's potentially dire financial situation and domestic pressure on its sponsors, Iran and Syria.

"In a sign of a cash crunch, the Hamas government in Gaza has failed to pay the July salaries of its 40,000 employees in the civil service and security forces," Reuters reporter Nidal al-Mughrabi wrote in a recent story on the group's financial woes. "Hamas leaders promised full payments in August, but not all employees received their wages as scheduled on Sunday."

The financial crisis was sparked by Iran's reduction - and then suspension - of aid, primarily because the group has not sponsored rallies in favor of Syrian strongman Bashar al-Assad.

But Hamas finds itself caught between a rock and hard place, as Syria's embarrassing and brutal crackdown on protesters extended to a Palestinian refugee camp near the city of Latakia. Assad's naval gunships and armed forces pounded the camp, killing an unknown number of residents and forcing more than 10,000 Palestinian refugees to flee. Syria has since been accused of covering up the incident.

"On the one hand, Hamas does not want the Syrian regime to disappear," Syrian political scientist Bassam Ezbidi told The Media Line, a Jerusalem-based news agency. "But on the other hand, how can it justify its strategic alliance with a state that kills Palestinians? Hamas has always regarded itself as a resistance movement which represents the Palestinian people, and that's the bottom line."

Financial struggles are a hit that Hamas has been unwilling to fully acknowledge. Despite the group's claims that it is only having "financial liquidity" problems, Hamas' reliance on Iranian aid vastly exceeds its revenues from all other sources. Taxes on merchants and goods from Israel and tunnels accounted for about a tenth of the group's $540 million budget last year. Iranian aid is estimated to be in the hundreds of millions of dollars each year.

There has also been a sharp decline in funding from the Muslim Brotherhood, another major supporter of the Palestinian terrorist organization, as the Brotherhood allocates funds to political forces of the Arab Spring.

Financial support isn't the only thing that Iran and Syria offer Hamas. The group has withstood tremendous diplomatic pressure from outside sources, particularly since it violently seized the Gaza Strip in 2007. Iran and Syria have helped the group sustain its campaign of terror through weapons shipments and advanced military courses.

In 2006, Syria proclaimed its unabashed support for Hamas, promising to raise funds for the group and establish direct phone links with it. "We are not afraid of anyone in our support for the Palestinian cause," Syrian Foreign Minister Walid Moallem said at a joint press conference with Hamas leader Mahmoud Az-Zahar. Huge Iranian shipments of weapons passed through Syria on their way to Hamas, including 50 tons of weapons which were seized by the Israeli navy in March.

Despite a common interest in harassing Israel, Hamas' brotherly relationship with Syria has soured at a rapid pace. Hamas refused to support the crackdown on fellow Sunni protesters in Syria, putting it at odds with the country's non-Sunni leadership and Iran's Shiite government. In May, Hamas fought back against rumors that it would move its offices from Damascus to Cairo, even arguing with reports on the move from its ally, the Muslim Brotherhood. Although these rumors proved to be false, the negativity between the two parties has been an open secret in diplomatic circles and even on the Palestinian street.

Outside pressure on the group has been matched by internal stresses.

Islamist groups are pushing Hamas to Islamize Gaza more rapidly and thoroughly, at times carrying out violent actions. Salafi Islamists like Jaljalat and Jaish al Islam call for an Islamic Emirate based in Gaza, creating a base for an unending war with Israel.

These groups also believe that Hamas doesn't go far enough in resisting its enemy. On online forums and in rallies, they accuse Hamas of "leaving the path set by the group's great founders," including the liberation of Muslim holy sites in Jerusalem and "defending the Quran." Instead, they claim, Hamas has grown too close to disbelievers and uses "fake" scholars who go so far as to justify the killing of Muslims. Worst of all, they are accused of abandoning the jihad against Israel.

Hamas has maintained an uneasy relationship with these Salafi groups, at times cooperating for attacks but often cracking down on them. They have even smashed smaller groups like Jund Ansar Allah, who denounced Hamas, declared their own Emirate, and started to impose a stricter form of Shariah in a corner of Gaza.

Many Gazans, on the other hand, are resentful of the material prosperity of the Hamas elite or in its harsh imposition of certain Shariah restrictions.

Many among Gaza's budding middle class are Hamas members, a fact which the group denies but is sparking resentment among many people. "Hamas has become rich at the expense of the people," The Associated Press quoted one Palestinian saying. The story noted that Hamas rose to power by "tending to the poor - through charitable aid, education and medical care - along with its armed struggle against Israel."

The imposition of Islamic law has been both harsh and cynical, with Hamas activists sometimes using the excuse of religion to violently break up protests against Hamas rule. Restrictions on women and public displays of affection have been applied, sometimes half-heartedly, sparking protests from secular groups about religious coercion and Islamists about the slow pace of Islamization.

Hamas has also felt pressure to balance between Western considerations and local concerns. A leader of a fellow militant group, the Popular Resistance Committee, wants greater Islamization in society, but recognize the "foreign considerations" at play. "If the West weren't applying pressure, Hamas would probably enact more Islamic laws," he said, according to a report by the International Crisis Group. In effect, Hamas pushed its agenda as a movement into the government, using rumors and haphazard enforcement to create a self-censorship in Gaza.

In addition to pressure on its core in Gaza, thousands of Hamas supporters outside of Gaza have faced a campaign of arrest, according to the Islamist group's news site. Primarily, this has been an effort by its Fatah rivals who have sought to control Hamas' growth and activity in the West Bank.