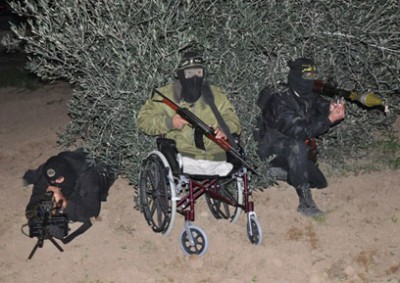 The Palestinian Islamic Jihad [PIJ] in Gaza released pictures of handicapped fighters participating in a military exercise, reports the Israeli paper Yediot Aharonot. The group has been trying to raise its position in relation to rival militants Hamas by employing all means at its disposal.

"The bombings against it and cutting off of our legs will not stop the Jihad," the website of PIJ's military wing quoted a wounded fighter saying. "We will continue to fight even after our bodies will be broken into pieces."

The website quoted another fighter named Abu Abdul Rahman, who lost his legs during an Israeli army bombing. "We rely on the way of the Jihad and we will not change it. There is not changing of the Jihad and its resistance, until all of the Palestinian land is liberated from the criminal Zionists," the wounded fighter said in reference to the destruction of Israel. He had made a promise to himself to return to battle after he was released from medical care. 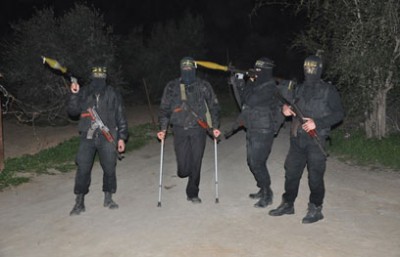 Yediot Aharonot's analysis of the pictures showed a "great doubt" if the men would actually be able to fight. However, it also noted that the pictures, and the Islamist movement's increasing media consciousness, indicate that it wants to prove itself as a viable alternative to other movements. "While the wounds may injury our body, they don't do the same to our will," PIJ's website quoted Abu Abdul Rahman as saying.