The Tragedy in Norway 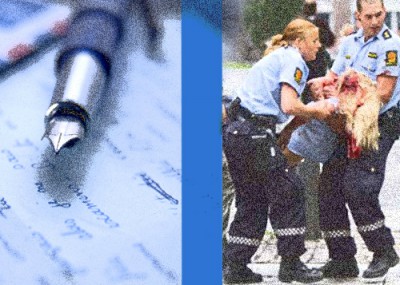 On Friday morning the world was confronted with the evil madness of Anders Behring Breivik, the man accused of killing 76 people in Norway.

The profile coming out now describes the man as a "right-wing Christian Fundamentalist." He also posted a manifesto online decrying multiculturalism and Islamism in Europe and calling for a revolution to rid the world of Marxists and Muslims. What are we, who have spoken out against radical Islamic jihadist acts in the past, to make of this?

In June of this year I had the privilege to testify before the House Committee on Homeland Security, chaired by Rep. Peter King of New York, on the topic of threat of Islamic radicalization in the U.S. prison system. During my testimony, I was asked a question by Rep. Sheila Jackson Lee, D-Tex., regarding a letter she stated the committee received from an inmate who she described as a "Christian Militant." That inmate was in prison for setting an explosive device at an abortion clinic. Rep. Lee asked if I thought that individual should be considered a terrorist and if I thought that "Christian Militants" were a threat to the security of the United States.

"I believe that anyone who kills (innocent) people in the name of God is an ideologue," I responded. When Rep. Lee was not satisfied with my answer she asked again if I would agree that "Christian Militants" pose the same threat as radical jihadists like al-Qaida. I stated that I doubted that you would find foreign backing or financing for Christian militants, as is the case with radical Islamic jihadists.

I know of no country on this planet that provides safe haven for individuals like Anders Behring Breivik, or of organizations that would support his heinous act.

On the contrary, places like Afghanistan, Somalia, and Yemen have become havens for radical Islamists who continue to plot violent acts against innocent people in the name of Allah. They actively recruit Westerners with an appeal to base emotional and religious appeals in hopes of exporting their violence.

We condemn the despicable twisted acts of a lone individual such as Breivik, and our sympathies go out to the survivors and families of the victims. But we understand that this was not supported by some shadow organization or government bent on ridding the worlds of infidels. Evil can take many forms, we must speak out against it wherever it is found.

Patrick Dunleavy is the former Deputy Inspector General for New York State Department of Corrections and author of The Fertile Soil of Jihad, which is scheduled to be published in September.

I agree with Mr. Barrow. Furthermore I would like to know if anyone could find a radical "right-wing Christian" sermon being preached at a Church in Norway someplace that recruited, funded and trained Breivik the same way that Mosques do in Middle Eastern Nations. The only example of extremist "Christianity" I have ever heard in America was that of President Obama's Church that he attended for many years. Jackson-Lee should pick up her phone and ask her confidant what "Christian" radicalism is all about.

Karl Marx has a lot to answer for with these relentless drone attacks.

Politics in the way of truth

What evidence is there that Breivik is a Christian? He has been so labeled, but at what point did he ever claim to be a Christian? His use of the name "Templers" in his manifesto is all that I am aware of as a relation to Christianity. It appears that he has been so declared a Christian due to his ancestry or possibly that he is simply not a Muslim. Breivik has been labeled a Christian in the same manner as was Jared Lee Loughner following his attack in Tucson neither is these terrorist are Christians.

Of course there are many dangerous extremists who may have as their focus any number of causes. Yet of all the groups and the various causes that terrorists have declared in the past fifty years none have posed the threat nor carried out attacks on the scale which the world faces from Islamic terrorism currently. The Representative's question however does pose a concern. Christians know well and expect such injustice. As Jesus said; "Remember the word that I said unto you, the servant is not greater than his Lord. If they have persecuted me, they will also persecute you." John 15, verse 20, acceptance of this is a part of faith. But, Lee's question harkens back to Nero. And like Nero it is a political statement and there is no truth in it. Her question is not directed towards the protection of our Nation nor is it an honest attempt to find answers. It is rather designed to minimize the dangers of Islamic terrorism and confuse the issue obscuring the nature of the current dangers.