UPDATE: A post on jihadi web forum Ansar al-Mujahideen tells a different story about how jihadis in Yemen escaped from prison last Wednesday. A tunnel used in the escape—originally attributed to the escapees themselves— appears now to have been dug by jihadis outside the prison walls. The story on Ansar al-Mujahideen indicates that jihadis tunneled into the prison from the outside over the course of one and half months, formed armed escapee groups, and departed the prison quietly, except for the last group that opened fire on a prison observation tower. The post uses Google Maps satellite imagery to show details of the prison compound and the targeted sites. 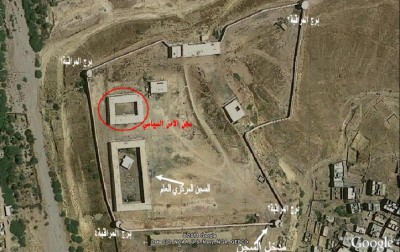 With Washington planning for the possibility of a jihadist takeover in Yemen, the security situation there continued spiraling downhill Wednesday, as between 40 and 60 al-Qaida militants broke out of jail in southern Yemen. The jailbreak, which occurred while Assistant Secretary of State for Near Eastern Affairs Jeffrey Feltman was visiting the country, underscored the failure of the Yemeni government to discharge its security responsibilities and raised further questions about its ability to prevent jihadist operations in its territory.

The inmates reportedly escaped using a 50-yard-long tunnel they had dug themselves. A jail official told the Washington Post that the prisoners attacked a prison guard with daggers, took his gun and fired it as they were escaping. One guard was killed and another wounded. Gunmen outside the prison aided the escape by shooting at prison guards to distract them.

Yemen's state-run news agency said that at a meeting Wednesday with acting President Abed Rabbo Mansour Hadi, Feltman praised the interim leader's moves to meet with political opponents, open roads and remove armed men from cities. But the prison break underscored the jihadist challenge to the regime from al-Qaida in the Arabian Peninsula (AQAP)—currently regarded as the most immediate terror threat to the United States.

Recent reports indicate that, for the first time, militants are seeking to capture and hold large sections of territory in southern Yemen, benefiting from a dangerous power vacuum created by the popular rebellion against longtime strongman Ali Abdullah Saleh. In the AQAP-occupied town of Zinjibar, residents describe a ghost town without electricity, water or other services. Government authority is absent, and extremists man local checkpoints.

Adding to the chaos and uncertainty are reports that Saleh—currently being treated in Saudi Arabia for severe burns and other injuries received when opposition forces shelled his palace in Sana earlier this month—might be returning to Yemen later this week. The rumorsspurred threats of war from tribal rivals.

Wednesday's mass escape was just the latest in a series of jihadist jailbreaks in Yemen over the past decade. Perhaps the most notorious was the February 2006 escape of 23 prisoners from a prison in Sana. Two of those who escaped that time were Nasir al-Wuhayshi and Qaim al-Raymi, who became top leaders of AQAP.