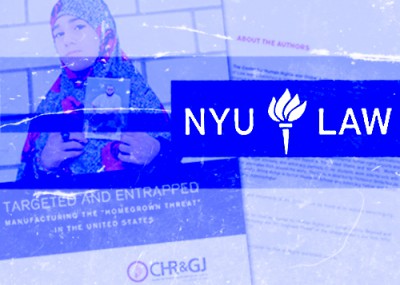 A new report from New York University's law school exaggerates the government's role in "manufacturing" evidence to support the claim of a rise in homegrown terrorism while also relying on a series of flawed and biased reports from groups hostile to law enforcement's counterterrorism efforts, an analysis by the Investigative Project on Terrorism shows.

The report, "Targeted and Entrapped: Manufacturing the 'Homegrown Threat' in the United States," was released May 18 by the Center for Human Rights and Global Justice, a division of the NYU School of Law. It contends that federal and local law enforcement agencies are unfairly targeting Muslims without any evidence they are involved in unlawful behavior. In some cases, the report contends, the government has used paid informants who unfairly trapped defendants into participating in terror plots.

In their effort to discredit federal cases against those suspected and/or convicted of terrorism-related plots, the report's authors have relied extensively on a series of studies written by their political allies, legal arguments by sympathetic but usually unsuccessful defense attorneys, and family members of convicted terrorists.

For example, in a section they entitle, "The Myth of Radicalization," the authors criticize a 2007 New York Police Department study on radicalization and call it "thinly sourced" and "reductionist." However, the source cited in the report's footnotes indicates it was another study by an allied group affiliated with the Center for Human Rights and Global Justice.

To prove their points, the authors cite three cases in particular:

The cases cited in the report have all been upheld by courts throughout the country. In each case, defense attorneys and friends and family of the defendants claimed they were entrapped by law enforcement agencies. In each case, judges and juries rejected their claims.

In essence, the NYU report relies on the authors' and their allies' opinions that entrapment occurred, not the legal rulings of numerous juries and judges.

The report also relies on sources tied to the defendants for its claims about bias and profiling. For example, it claims there are "dozens of cases where informants were inserted into Muslim communities to lure young Muslim men into participating in concocted plots." The source for that contention was the opening statement of Troy Archie, the defense attorney for Eljvir, Dritan and Shain Duka, who were convicted of plotting to attack Fort Dix, N.J. in 2008.

In each case cited in the report, judges and juries have ruled against the entrapment claims made by the NYU authors.

In this case, federal agents arrested James Cromitie, also known as Abdul Rahman, and three other defendants in May 2009 and charged them with plotting to blow up a synagogue in Riverdale, the Bronx, and shoot down military aircraft at a nearby base with surface-to-air Stinger missiles.

The defendants claim they were entrapped by Shahed Hussain, an FBI informant. Last September, Hussain testified in federal court that he secretly recorded Cromitie and other defendants plotting to destroy the synagogue and other targets.

Cromitie and the others – Onta and David Williams and Laguerre Payen – told Hussain repeatedly that they planned to commit acts of violence, according to the recordings submitted as evidence in the case. "Without hesitation I will kill 10 [Jews] and then I will have to think 20,000 times before I kill one Muslim," Cromitie told Hussain.

Despite the defendants' claims of outrageous government conduct by the prosecutors, the court rejected their arguments. In a ruling issued May 3, the court wrote "there is absolutely no doubt that the defendants committed the charged crimes. … All facts pertinent to conviction were uncontested, except one – whether the defendants were predisposed … to commit the heinous crimes they were obviously prepared to carry out."

In their attempt to discredit the successful prosecution, the report's authors cite interviews with Williams' mother and brother saying that he tried to turn his life around after his release from prison. While that's a laudable goal, it doesn't prove entrapment. They are also hardly unbiased sources.

The authors don't even claim that Williams was innocent. Instead, they quote Alicia Williams, David Williams' aunt, saying she and her family "were pulled into a political game" created by the FBI. Perhaps, but that doesn't alter the facts that David Williams and the others agreed to participate in the scheme laid out by Hussain.

Known as the Fort Dix plot, this case involved a series of Albanian immigrants who were accused of plotting to attack the New Jersey military base. It involved two FBI informants, Mahmoud Omar and Besnik Bakalli, who helped obtain weapons to use in the attack, including a rocket-propelled grenade.

The five defendants – Mohamad Shnewer, Serdar Tatar and Dritan, Eljvir and Shain Duka – were convicted in December 2008 of plotting to kill soldiers at Fort Dix. They were acquitted of attempted murder charges.

Attorneys for the defendants raised the entrapment defense, but the judge rejected it before the trial. The NYU authors also report that the Dukas' defense attorneys didn't even emphasize entrapment. Instead, they claimed the brothers weren't aware of any plot at all.

So, their report, which leans heavily on the claims of entrapment, shows that the defense attorneys themselves didn't have confidence in the entrapment defense and didn't use it. The report also cites two news reports as evidence of concerns about entrapment. In both examples, however, the stories quote defense attorneys raising the issues, not objective reports.

Shahawar Matin Siraj and James Elshafay conspired to plant explosives at Manhattan's 34th Street subway station in August 2004, just before the beginning of the Republican National Convention that was held at the nearby Madison Square Garden. Elshafay pled guilty to conspiracy in October 2004, and testified against Siraj at his trial. Additionally, an NYPD undercover police officer, known as Kamil Pasha, testified against Siraj. The jury convicted Siraj in May 2006 in Brooklyn federal court on all four counts of conspiracy, and the judge sentenced him to 30 years in prison in January 2007.

The evidence against Siraj also included secretly taped conversations between him and an NYPD paid informant, Osama Eldawoody, an Egyptian engineer. In those conversations, Siraj expressed his hatred for the United States and his interest in placing explosive devices in various parts of New York City. Siraj's sole defense at trial was his claim that he was entrapped by Eldawoody. In its analysis of the law of the entrapment defense, the trial court noted that Siraj's evidence of government inducement was minimal:

"The only evidence defendant offered on this subject was his own testimony that the confidential informant constantly talked to him about the war in Iraq and inflamed his anger against the United States and its treatment of Muslims, for example, by showing him pictures of the prisoners at Abu Ghraib." U.S. v. Siraj, 468 F. Supp. 2d 408, 415 (E.D.N.Y. 2007).

"[A] rational jury could find that Matin failed to carry his burden," the Second Circuit panel noted. "Matin's only evidence of inducement was his own testimony. And that testimony was contradicted by the testimony of a cooperating witness and the case agent. The government further undermined Matin's credibility by demonstrating that he had lied under oath. We therefore conclude that the evidence sufficed to convict Matin."

But like their discussion of the previous two cases they use as examples, the NYU report authors ignore the decisions of the courts and jury and present the defendant's version of the facts of the case from the mouths of the defendant's family. Siraj's mother is quoted as saying, "Many men in our communities have been targeted, and the women and children are left out in the cold."

After their cursory discussion of these cases, the authors make generalized and sweeping conclusions that "[t]hese cases and other documented practices are suggestive of larger patterns of law enforcement activities that are targeting Muslim communities around the country." As evidence of this statement, the authors direct the reader to several footnotes which cite reports by their political allies, such as the ACLU and the Council for American-Islamic Relations, which have consistently opposed all counterterrorism efforts by the US government since 9/11. Why do these cases demonstrate profiling and impermissible actions? Because they say so.

With no independent corroboration, the study recommends sweeping changes in the way terrorism investigations are conducted. Among them: "The FBI is explicitly and consistently prohibited from using informants to engage in entrapment or inducement to commit crimes."

Attorney General Eric Holder has made it clear that such drastic changes would crimp law enforcement's ability to thwart budding terrorist plots. In a speech given in December to a Muslim lawyers group, Holder acknowledged sting operations may be unpopular, but they work.

"Since 2001, more than 400 individuals have been convicted of terrorism and terrorism-related violations in federal courts," he said. "And in those terrorism cases where undercover sting operations have been used, there is a lengthy record of convictions."

"Those who characterize the FBI's activities in this case as 'entrapment' simply do not have their facts straight - or do not have a full understanding of the law," Holder added.

"Our nation's law enforcement officials deserve our gratitude – and respect. Without their work – and their willingness to place public safety above personal security – government simply could not meet its most critical responsibility of protecting American lives."

The NYU report simply re-argues points defense counsel have argued unsuccessfully in the legal system. To rely on circular reasoning to claim that the government is "manufacturing the homegrown threat in the United States" is nothing more than an attempt to re-litigate the defendants' claims after they have lost.