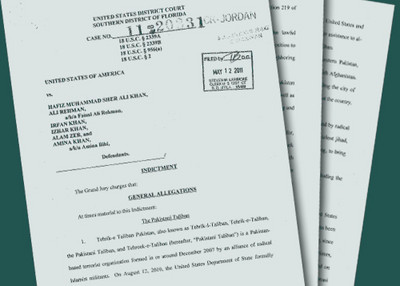 Two South Florida imams and a relative made initial court appearances Monday after being arrested over the weekend for alleged material support to the Pakistani Taliban.

Hafiz Khan, 76, along with two sons and a daughter, a grandson and a Pakistani man, are charged with four counts of conspiring to provide material support to terrorists and actually providing the support. Like his father, Izhar Khan is an imam at a South Florida mosque. The two, along with Irfan Khan, were arrested Saturday. The three other defendants are believed to be in Pakistan.

Hafiz Khan has been the imam at Miami's oldest mosque since at least 1999. Yet, according to South Florida media reports, no one suspected he harbored radical ideas. Though he came from Pakistan's Swat Valley, home to the Tehrik-i-Taliban Pakistan and other terrorist groups, Khan's congregants and associates say they knew nothing about his alleged support for terrorists.

Privately, prosecutors allege, his desire for Islamic law to take over Pakistan and his repeated calls for acts of terrorism to accomplish it were made plain.

"Despite being an Imam, or spiritual leader, Hafiz Khan was by no means a man of peace," U.S. Attorney Wilfredo Ferrer said in a statement. "Instead, as today's charges show, he acted with others to support terrorists to further acts of murder, kidnapping and maiming. But for law enforcement intervention, these defendants would have continued to transfer funds to Pakistan to finance the Pakistani Taliban, including its purchase of guns."

"I never, ever heard anything that came close to militancy from him," mosque secretary Fazal Deen said.

"Every time I attended his mosque, the sermons never had a political tone," Mohammad S. Shakir, director of the Miami-Dade Asian Advisory Board, told the Miami Herald. "He came across as a 76-year-old grandfather talking about virtues and what to do and not do within the religion,"

"There is not even a 1 percent chance that he would do this," Arif Baig, a Pakistani native who runs a Little Havana convenience store, told the South Florida Sun-Sentinel.

During a news conference, the Council on American-Islamic Relations (CAIR) chapter director said people were shocked at the allegations. But rather than delve into what the Khans preached or how they allegedly concealed their terror support, Nezar Hamze expressed concern that worshipers might avoid their mosques in fear of a backlash from the arrests.

He knows the Khans as "very quiet individuals that seemed to be very pious people. That's their demeanor," Hamze said.

The indictment makes no mention of any activities within the Khans' mosques or of any radical messages they may have preached. Agents did seize computers from Izhar Khan's mosque in Margate.

The indictment does not specify that there are recordings of Hafiz Khan discussing his support for the Taliban or fundraising for it with his fellow defendants, but it does contain specific references to conversations from 2008 through last fall.

During a September 2009 conversation with his son Zeb, Khan said "there should be resistance and bombings that would leave no trace and no names" if Sharia were not implemented in Pakistan, the indictment said.

Two months earlier, Khan "called for an attack on the Pakistani Assembly that would resemble the September 2008 suicide bombing of the Marriott hotel in Islamabad, Pakistan," during a conversation with his son Irfan Khan, the indictment said.

If the accusations prove true, Hafiz Khan sent tens of thousands of dollars to people capable of such brutality. Some of that money went to a madrassa where children "learn to kill Americans in Afghanistan," the indictment said.

"Some of this money was used for the purchase of guns and weapons," Ferrer told reporters Saturday. "But again, I reiterate, that's just the tip of the iceberg. We will be able to prove that there is more than $50,000 that went to the Taliban."

The Pakistani Taliban is closely aligned with al-Qaida and wants to replace Pakistan's government with strict Islamic law. It claimed credit for a December 2009 suicide attack which killed seven Americans at a CIA station in Khost. A year ago, a suicide bomber targeted the U.S. consulate in Peshawar killing at least six Pakistanis.

It claimed responsibility for a suicide bombing targeting military recruits last week in Pakistan that was considered a revenge attack for the American killing of Osama bin Laden. On Monday, a Saudi diplomat was gunned down in Karachi in an attack in which the Pakistani Taliban is suspected of carrying out.

And the group is believed to have trained failed Times Square bomber Faisal Shahzad, who hoped to kill dozens in New York if his car bomb had been built properly. In pleading guilty, Shahzad said he had no regrets. "It's a war," he told the court. "I'm going to plead guilty a hundred times over because until the hour the U.S. pulls its forces from Iraq and Afghanistan and stops the drone strikes ... we will be attacking the U.S. And I plead guilty to that."

In July 2009, Hafiz Khan and an unindicted co-conspirator "called for the destruction of the Pakistani government and discussed a strategy to shoot and kill Pakistani officials." In another converstaion, Khan "cursed the leaders and army of Pakistan and called for the death of Pakistan's President and for blood to be shed in a violent revolution similar to that which occurred in Iran."

Defendant Ali Rehman, a Pakistani, allegedly worked with Khan to send guns to the Taliban.