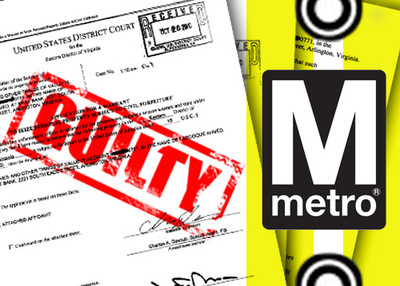 A northern Virginia man was sentenced to 23 years in prison Monday after pleading guilty to two counts of trying to provide material support to al-Qaida.

Farooque Ahmed scouted subway stops along Washington, D.C.'s Metro system and other potential targets for terrorist attacks. Unbeknownst to him, his al-Qaida handlers were undercover FBI agents in a sting operation.

They approached Ahmed last year after he inquired "about making contact with a terrorist organization in order to participate in jihad by traveling overseas to fight coalition forces in Afghanistan," his plea agreement said. Last April, he met with someone he thought was an al-Qaida member at a hotel near Dulles Airport.

He told the handler "that he wanted to fight and kill Americans in Afghanistan," the plea agreement said. Ahmed said "of course" when asked if he was willing to be a martyr in the process.

Instead, he carried out surveillance trips to determine which subway stops would make good targets for a series of coordinated bombings and to assess security at Metro stations at Arlington National Cemetery and Pentagon City, among other locations.

During a September meeting, Ahmed made it clear he wanted to kill as many people as possible. He suggested bombing the stations between 4 p.m. and 5 p.m. "to cause the highest number of casualties," the agreement said. He sketched out each station, suggesting where to place the bombs for maximum effect.

In a previous meeting, he provided a thumb drive with video images from his surveillance runs. An accomplice used a cell phone camera, pretending to talk while he shot video of the stations, the plea agreement said. That accomplice has not been identified publicly, but the agreement includes a pledge of cooperation from Ahmed.

In court Monday, Ahmed reportedly was contrite, telling U.S. District Judge Gerald Bruce Lee that "I'm not able to put it into words. I'm sorry, it was the wrong action."

Ahmed's arrest was the first in a flurry of similar cases last fall – homegrown radicals who hoped to carry out terrorist attacks, only to find out they were part of sting operations by the FBI. A month after Ahmed's arrest, authorities in Portland arrested a man who thought he was detonating a bomb at a Christmas tree lighting ceremony.

In December, a Baltimore man was arrested after he tried to detonate a car bomb at a Baltimore armed forces career center. In both cases, the bomb was rendered inert by FBI agents.

These sting operations generated criticism from Islamist groups, most notably the Council on American-Islamic Relations (CAIR). "The relationship with law enforcement right now is tense," CAIR spokesman Ibrahim Hooper said after Ahmed's arrest. "There's a sense of being under siege in many Muslim communities. People just assume there are agents or informants in their mosque now. It's a fact of life."

Similarly, CAIR-San Francisco representative Zahra Billoo told a local television station that the tactic was excessive. "The question is, are we looking to stop radicalization and stop extremism before it becomes a problem or do we want a sensational story?" she asked after the Portland arrest. "And I'd really argue here that the FBI was looking for a sensational story."

Ahmed offered no indication that he felt set up. As the plea agreement shows, he was looking for al-Qaida contacts and eagerly followed the instruction of the people he thought were members of the terrorist group. He told them about his training with firearms and martial arts and expressed his desire to kill American troops.

In a statement filed with the court, Ahmed expressed his regret.

"I know that what I did was wrong, and that a significant punishment must and will be imposed for what I did," he wrote. "But no punishment could be greater than the disappointment I already feel for engaging in this conduct, and for letting myself and my family down. I know that my conduct could have endangered many people, and I am happy that nobody was actually injured."

Ahmed, who signed the guilty plea March 29, is a naturalized citizen of Pakistani origin who came to the United States in 1993. He lived in Ashburn, a suburb about 30 minutes west of Washington, D.C.

In a statement, law enforcement officials emphasized the homegrown nature of Ahmed's case. "From his home in Ashburn, Virginia, believing that he was working for Al-Qaeda, Farooque Ahmed plotted to carry out the simultaneous bombing of multiple Metro trains in the D.C. area," said Todd Hinnen, acting assistant attorney general for national security. "Today's plea provides a powerful example of how law enforcement and intelligence officials working together continue to use the criminal justice system to protect America from attack, obtain intelligence from terrorists, and secure their lawful, long-term detention."

James W. McJunkin, assistant director in charge of the FBI's Washington field office, said the FBI is committed to "disrupting possible terrorist plots" and those who express a desire to help terrorist groups. Ahmed "followed a twisted, radical ideology outside that of the mainstream Muslim community which led him to break the law. He now faces the consequences of his actions," McJunkin said.

Lets hope we can keep it up and stay a jump ahead of the jihadista among us. But when you think abou it, its only a matter of time until someone succeeds in an attack. I hope we are finding out more about how these people are being radicalized in the first place. What can we do? Some people live in freedom to think and worship as they wish here, with only the proviso that they allow the rest of us the same right, and they decide that to murder innocents indescriminantly is the thing to do about it. Such craziness is hard to control. But good for the cops this time!