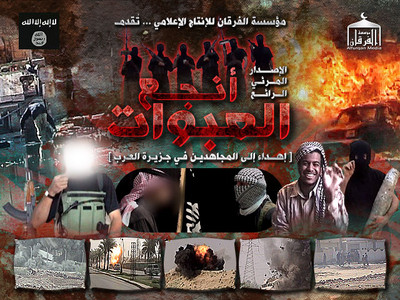 The Islamic State of Iraq's publication group, Al-Furqan Media, has released a new video on the construction, deployment, and use of improvised explosive devices [IEDs]. The Arabic video, "Destructive IEDs," appears in Ansar al-Mujahideen's English forum with the message "Prepare Yourselves!"

The video features scenes about constructing IEDs, both for use against military and civilian targets. In one section of the video, an explosives expert demonstrates the construction of a simple IED with a detonator, explosives and a copper explosively formed penetrator [EFP]. After the construction section, the video shows footage of successful operations and gives advice about camouflaging devices from minesweepers in urban and rural environments.

The video also contains common features in a number of jihadi videos. These include pictures and footage of attacks on American soldiers, denouncements of Islamic scholars that do not "defend the religion," and speeches by leaders of the jihad, including Osama bin Laden.

On Ansar Al-Mujahideen's forum, a graphic calling the video a "presentation to the Mujahideen in the Arabian Peninsula" accompanies dozens of links to file transfer websites.