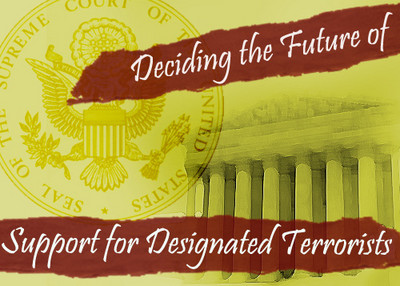 The Department of Justice won a major victory Monday when the U.S. Supreme Court upheld the constitutionality of the "material support" statute. In a 6-3 opinion announced by Chief Justice John Roberts, the court held that the Constitution does not preclude the government from criminalizing speech and other forms of advocacy in support of designated Foreign Terrorist Organizations (FTO), even if the intent is to support the group's "peaceful or humanitarian" efforts.

Under U.S. law, it is a crime for any person to provide "material support or resources" to a designated FTO. Known as the "material support" law, 18 U.S.C. § 2339B has become a cornerstone in U.S. counter-terrorism efforts. Since 2001, the U.S. has charged approximately 150 defendants with violations of the statute, and to date approximately 75 people have been convicted.

The statute defines "material support or resources" as:

"any property, tangible or intangible, or service, including currency or monetary instrument or financial securities, financial services, lodging, training, expert advice or assistance, safehouses, false documentation or identification, communications equipment, facilities, weapons, lethal substances, explosives, personnel (1 or more individuals who may be or include oneself), and transportation, except medicine or religious materials" (emphasis added).

The Court began by rejecting the argument that the statute was violated the Fifth Amendment because it was unclear to an ordinary person what type of activity was actually prohibited. Explaining that "perfect clarity and precise guidance have never been required," the majority found the statute was sufficiently clear in what conduct was proscribed:

"Of course the scope of the material-support statute may not be clear in every application. But the dispositive point here is that the statutory terms are clear in their application to plaintiffs' proposed conduct, which means that plaintiffs' vagueness challenge must fail."

Next, the Court rejected the claims that the law violated free speech and free association guarantees in the First Amendment. Those challenging the statute sought to provide non-violent resources to support the humanitarian and peaceful efforts of terrorist organizations. The Court found that not only was there no distinction between the violent and non-violent wings of terrorist groups, but that terrorist groups benefit from any support given to them.

The case on appeal involved groups and individuals who wanted to support the humanitarian and political activities of the Kurdistan Workers Party (PKK) and the Liberation Tigers of Tamil Eelam (LTTE)—groups that were designated as FTOs in 1997.

Hoping to continue supporting the PKK and LTTE, the petitioners challenged the law, aiming to have it struck down as unconstitutional. As they explained in their opening brief to the court, "plaintiffs here seek only to safeguard their right to promote lawful, nonviolent activities through pure speech," and the statute violated their First and Fifth Amendment rights by preventing them from doing so.

Rejecting each of the challenges, the Court conceded that the PKK and the LTTE may engage in political and humanitarian activities. But overwhelming evidence also showed that both groups have committed numerous acts of terrorism, some of which have harmed Americans. In light of the dual-use qualities of terrorist organizations, the Court went on:

"Whether foreign terrorist organizations meaningfully segregate support of their legitimate activities from support of terrorism is an empirical question. When it enacted section 2339B in 1996, Congress made specific findings regarding the serious threat posed by international terrorism. One of those findings explicitly rejects plaintiffs' contention that their support would not further the terrorist activities of the PKK and LTTE: 'Foreign organizations that engage in terrorist activity are so tainted by their criminal conduct that any contribution to such an organization facilitates that conduct.'"

Recognizing that any aid given to a terrorist group supports that group, the Court next turned to whether or not it would be permissible to give non-violent aid to promote the peaceful activities of a terrorist group.

Prior to Monday's ruling, critics of the statute had argued that people should be able to provide aid to promote the non-violent activities of terrorist groups. As one amicus explained in supporting the challenge to the law:

"Unlike money or weapons, information is not fungible. Learning about non-violent alternatives does not enhance the ability to make bombs; nor does communication with a researchers or journalist who seeks to expand the store of public information about a group."

Such arguments were embraced by civil liberties groups who argued, among other things that:

"Allowing charities to provide humanitarian aid to individuals trapped in conflict zones in the Middle East and Central Asia, for example, would go a long way towards countering negative perceptions of America….Requiring a showing of specific intent to support illegal act prevents squandering limited prosecutorial resources on pro-peace charities such as the Humanitarian Law Project."

That argument held some sway with a number of Justices. The three Justices dissenting, led by Justice Stephen Breyer, believed that in order to hold somebody liable for violating the statute, there must be a finding that the defendant intended one's support to benefit the violent aims of a terrorist group.

This point was roundly rejected by the majority. Discussing how humanitarian aid assists terrorist groups by legitimizing them during arguments in February, Justice Roberts argued:

"A group that the government could reasonably determine should not be supported in any way…because it legitimizes it. It's going to make their hospital run better. People are going to like their hospital. So the party, the group, will be legitimized."

"The theory of the legislation is that when you aid any of their enterprises, you're aiding the organization. Hamas, for example, gained support among—among the Palestinians by activities that are perfectly lawful, perhaps running hospitals, all sorts of things."

The court roundly rejected the claims that there's a distinction between aid to a terrorist group's "social" wing, as opposed to its military wing. The ruling echoed Kagan's arguments:

"Material support meant to 'promote peaceable, lawful conduct' can further terrorism by foreign groups in multiple ways. Material support is a valuable resource by definition. Such support frees up other resources within the organization that may be put to violent ends. It also importantly helps lend legitimacy to foreign terrorist groups—legitimacy that makes it easier for those groups to persist, to recruit members, and to raise funds—all of which facilitate more terrorist attacks."

The Court was careful to explain that the ruling was limited to the immediate facts of the case. Justice Roberts pointed out early in the decision that "the Court does not decide whether any future applications of the material-support statute to speech or advocacy will survive First Amendment scrutiny," but only that it was acceptable in the case of Humanitarian Law Project.

Despite this warning, the opinion should end any future arguments that individuals can give non-violent support to promote the "peaceful or humanitarian efforts" to international terrorist groups. Among the cases which Monday's decision could affect is Holy Land Foundation for Relief and Development. Evidence in that case proved that millions of dollars from the Texas-based charity went to Palestinian entities controlled by the terrorist group Hamas. The defense argued that, regardless of who handled the money, it was sent to help feed and provide medical care to needy Palestinians.

With this decision, the government can continue to crack down on the support structure for terrorist organizations that is being uncovered on a routine basis in the United States.

For a more detailed discussion of the legal and policy arguments surrounding Holder v. Humanitarian Law Project see our comprehensive report on the litigation here.

i think is time for the creation of some internatonal finance organisation like UNO ; if we control international mony than we can easy control the international terrorisme.the key is mony.

This is some of the best news to be heard in past year. It is gratifying that somewhere, somehow, a bit of common sense can still prevail.