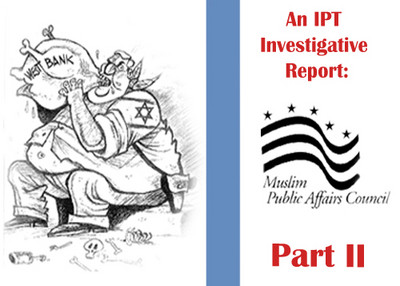 Vicious attacks on Israel as a racist, genocidal apartheid state.

Justifications for terrorism and defenses of its perpetrators.

These have been the stock in trade of policy statements by the Muslim Public Affairs Council (MPAC) over the years.

Many of those statements, detailed in the second installment of a new report by the Investigative Project on Terrorism (IPT), appeared in the pages of The Minaret, a now-defunct monthly magazine affiliated with the Islamic Center of Southern California (ICSC). MPAC has been closely intertwined with ICSC -- which originally gave it life -- by way of overlapping leadership and membership. Indeed, many MPAC officials worked simultaneously with The Minaret itself until it suspended publication in 2005.

Articles and editorials in the magazine, including those by MPAC members, downplayed the threat posed by Islamic extremists, served up inflammatory rhetoric about Jews and Zionism, and repeated conspiracy theories about both the 1993 and September 11, 2001 World Trade Center bombings.

Other hateful MPAC statements chronicled by IPT came in press releases issued by the organization, media interviews, and speeches by its officers at conferences and other public forums.

Multiple articles in The Minaret aimed at playing down the threat posed by Islamic extremists.

A typical piece, written by Dr. Javeed Akhter for the March 2004 issue, painted suicide bombers as young men with "legitimate anger towards the oppressors of Muslims all over the world," and even sought to rationalize their actions. "Restoration of justice and fair play … will largely vaporize the motivation for a suicidal mission," Akhter argued.

Other Minaret articles directly praised Hezbollah, designated as a terrorist organization by the United States -- a group that had been involved in multiple attacks including the deadly 1983 car bombing of the U.S. embassy in Beirut and the 1985 hijacking of TWA flight 847.

Israel's withdrawal from Lebanon, a staff writer asserted in the June 2000 issue, was "a clear sign that determination and will can lead to the liberation of an occupied homeland." Describing Hezbollah as "the Lebanese freedom fighter group that led the effort to drive Israel out," he wrote it was "being widely praised throughout the world."

As for anti-Semitic and anti-Zionist rants, Minaret articles and editorials frequently compared Israel to apartheid South Africa, alleged that Israel was engaged in genocide, and accused U.S. Jews of trying to undermine Muslim participation in the democratic process in this country. A 1998 article by Pejman Novin, an officer of the Muslim Students Association at UCLA, contended that Zionism was rooted in "colonialism, expansionism and racism," and had "striking similarities to the first European settlers in America and their attempt to annihilate Native Americans."

Such rhetoric was supplemented by equally hateful cartoons that the magazine ran on a regular basis. The drawings, many by Algerian-American artist Khalil Bendib, typically attacked U.S. support for Israel over allegedly put-upon Palestinians, assailed what they identified as the "Zionist Lobby," and crudely caricatured Israeli leaders and Jews in general. Examples of Bendib's work are in the full report.

Following the 9-11 attacks on the World Trade Center and the Pentagon, The Minaret published articles questioning Osama bin Laden's involvement and suggesting instead that the U.S. or Israeli government might have been responsible. An October 2001 article relayed for consideration bizarre -- and already debunked -- allegations that Jews working at the World Trade Center had stayed home from work on 9-11 because they had been warned of the impending attack.

Again in the November-December issue, an article entitled, "Terrorism and U.S. Foreign Policy," urged that "we first ask the basic question: who are the real perpetrators of this tragedy, and what are their motives?"

Outside the pages of The Minaret, MPAC officials have made clear that they see the genesis of terrorism in the very creation of the state of Israel in May 1948.

Maher Hathout, a founder of the group and still its senior adviser, had this to say in addressing an ICSC meeting in 1998: "On the 16th of May there will be a big hoopla in the country celebrating the day in which a wave of terrorists and vulgarity … uprooted the Palestinian people from their home, removed them, either into homeless refugees or as third class citizens in an apartheid state that is falsely described as a democracy … Powers of tyranny and terrorists picked our people, slaughtered citizens, killed the babies in the laps of their mothers."

Israel, Hathout said, "pushed them [the Palestinians] into utter despair, and when some of them acted desperately, the whole were branded as crazy terrorists."

Going a step further in a 2001 article entitled, "Accomplices in Crime," Aslam Abdullah declared the United States to be "a partner in the killing of people in Palestine." The U.S. administration "is responsible for giving the apartheid state a free hand in murdering people and our Congress is supportive of the criminal deeds of the racist state," he wrote.

MPAC once again tried to shift the onus of terrorism to Israel in a March 2001 statement on the ongoing Palestinian intifada. "Israeli occupation is terrorism and oppression. American policy must be based on the recognition that no people will remain passive under foreign occupation and military aggression," it asserted.

Hathout himself has expressed his sympathy for the designated terrorist group Hezbollah as simply misunderstood freedom fighters.

"The whole country keeps condemning Hezbollah," he said at Washington's National Press Club in 1998. "I disagree with them on other issues, but on the issue of fighting to liberate their land and attacking only armed forces, this is legitimate, that is an American value -- freedom and liberty."