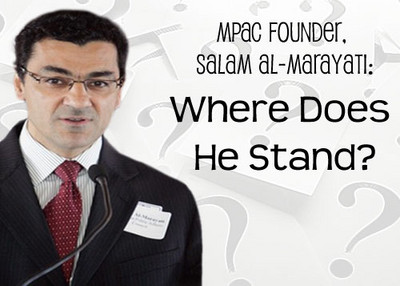 During the Cold War, the term "anti-anti-Communist" was used to describe people who were not Communists themselves, but who objected to every practical initiative to counter Soviet and Red Chinese expansionism.

In today's struggle against radical Islamists, Salam Al-Marayati, a founder of the Muslim Public Affairs Council (MPAC) and its current executive director, can fairly be described as an "anti-anti-terrorist" - someone who rhetorically opposes Islamist terror but objects to virtually every practical measure that democracies take to defend themselves.

While condemning terror in vague or general terms, Al-Marayati and MPAC focus their attacks on U.S. and Israeli security measures like Israeli military operations against Hamas or U.S. investigations of domestic terrorism.

Al-Marayati has long belittled the importance of using informants to monitor "homegrown" terror cells, as in this case in which two Lodi, California men were convicted.

In May, after federal authorities disrupted an alleged plot to bomb synagogues and fire missiles at American military aircraft, Al-Marayati continued his attacks against law enforcement. Asked in an interview whether it was useful to have informants in mosques, Al-Marayati replied by suggesting that the investigation was a waste of money.

"These were individuals who were either petty criminals or gullible people who were guilty of stupidity. They were not imminent threats to our country, as the FBI has stated," Al-Marayati told Fox News. "We want those tax dollars to be used to fight al Qaeda, not to entrap people who are just gullible."

Al-Marayati's personal charisma and general rhetoric about opposing terrorism have enabled him to escape serious scrutiny from the mainstream media. MPAC has issued statements criticizing Osama bin Laden and stating its opposition to terrorism without criticizing specific groups. As a result, it has received favorable media treatment it can post on its website.

Among the articles linked by MPAC is a 2005 column in which the Wall Street Journal's George Melloan praised MPAC as an organization that is "trying to promote better relations between Muslims and law-enforcement agencies" and launching "its own counterterrorism and civil-rights campaign, working with imams at mosques, Muslim community leaders, law-enforcement agencies and the media."

Both Democratic and Republican administrations have long consulted MPAC and met with its leadership to discuss terror-related subjects. During the George W. Bush Administration, for example, Undersecretary of State for Public Diplomacy Karen Hughes provided grants to MPAC and State Department officials addressed MPAC's national convention (see p. 15 of the testimony linked).

The U.S. government's courtship of Al-Marayati and MPAC has continued under the Obama Administration. This includes numerous softball stories at the State Department web portal www.america.gov like this, this and this. Earlier this year, the State Department published a 64-page booklet entitled Being Muslim in America, in which Al-Marayati was cited as an authority on "the American Muslim identity."

MPAC posted on its website a September 17 article boasting that, "This month, MPAC-DC has participated in about a dozen iftar dinner events sponsored by various government agencies. In the past week, we've attended iftars hosted by the State Department." The story links to a video of Secretary of State Secretary of State Hillary Rodham Clinton and State Department Special Representative to Muslim Communities Farah Pandith.

The website also includes a story about a Capitol Hill iftar co-hosted by MPAC and the Islamic Society of North America (ISNA) reporting that "special guests in attendance came from the White House, State Department, Department of Defense, The Pentagon and Islamic Relief."

The left-wing Jewish organization J Street has invited Al-Marayati to address a late-October conference in Washington, D.C. The move triggered considerable controversy within the American Jewish community like this article by Zionist Organization of America National President Morton Klein urging J Street not to invite the MPAC leader. It cites numerous "hateful anti-Israel and anti-American statements" made by the MPAC leader. These have included remarks likening supporters of Israel to Hitler and comments minimizing Hizballah's massacre of 241 U.S. Marines in 1983.

Al- Marayati responded with this op-ed praising "progressive thinkers and activists" like MPAC and J Street for striving "to develop mutual respect between Muslims and Jews." He wrote that such a dialogue would "enrich the national conversation around the prospects for a durable solution to" the Israeli-Palestinian conflict.

But judging from his record, it is difficult to see how Al-Marayati could play a constructive role. Time and again he has made statements suggesting that American Jews and Zionists exert a disproportionate influence in American political debate. He has accused Israel of "dehumanization" of Arabs and of "the massacre of Palestinians" during the December/January war against Hamas in Gaza. Al-Marayati and MPAC have suggested the Jewish State may have been behind the September 11 terrorist attacks and likened supporters of Israel to Hitler. Here is a small sampling of objectionable Al-Marayati and MPAC statements and writings:

*Suggesting that Hamas, Hizballah and Palestinian Islamic Jihad do not belong on the U.S. government's list of terrorist groups. In a 2003 counterterrorism paper advocating removal of all three terrorist organizations from the U.S. terrorism list, MPAC said that Washington's "preoccupation" with these groups "raises the question as to whether targeting Palestinian groups serves true national security interests or is based on political considerations."

A 1999 MPAC counterterrorism paper tried to minimize Hizballah's bombing of the U.S. Marine barracks in Lebanon in 1983 – an act which killed 241 U.S. military personnel:

"…this attack, for all the pain it caused, was not in a strict sense a terrorist operation. It was a military operation, producing no civilian casualties – exactly the kind of attack that Americans might have lauded had it been directed against Washington's enemies."

* Likening Israeli policy toward the Palestinians to South African apartheid. In 2008, MPAC published A Resource Toolkit on 60 Years of Palestinian Suffering (1948-2008). In the introduction, the group asserted that Palestinians live under an "apartheid" system – thereby likening Israel's actions to those of the white-minority government that oppressed South African blacks for much of the 20th century.

"The common Israeli practice of using collective punishment against innocent people has reached a level that many thought impossible as the siege against Gaza continues unabated. By cutting off supplies of fuel and other basic necessities, Israel has reduced the life of Gazan families to that of caged animals."

*Implying that support for Israel is somehow analogous to Holocaust denial. Appearing on KPCC Radio in Los Angeles during Israel's 2006 war with Hizballah, Marayati stated:

"We're against Holocaust denial, but we're also against people who exploit that as a way of shoving this kind of war propaganda and dehumanization of the Arab peoples and the Muslim peoples as if they have to pay the price for what Nazi Germany did to the Jews back in the 20th century."

*Suggesting that Israel may have been behind the September 11 terrorist attacks. In an interview on September 11, 2001, Al-Marayati raised the possibility that it was Israel rather than Osama bin Laden that was behind the attacks that killed nearly 3,000 Americans:

"If we're going to look at suspects, we should look at the groups that benefit the most from these kinds of incidents, and I think we should put the state of Israel on the list because I think this diverts attention from what's happening in the Palestinian territories so that they can go on with their aggression and occupation and apartheid policies."

*Likening the treatment of Palestinian Islamic Jihad (PIJ) financier Sami Al-Arian to the detention of innocent Japanese civilians during World War II. At a March 12, 2006 fundraising dinner for Al-Arian in Anaheim, California, Al-Marayati suggested that:

"we are being dictated upon, not only on terminology, but dictated upon on who speaks for us, and our organizations, our charities, are shut down one by one. Therefore, brothers and sisters, there is a storm that is coming. That storm is going to be worse than Japanese internment."

One month later, Al-Arian pleaded guilty to a charge of conspiring to provide services to the PIJ, a specially designated terrorist organization, in violation of U.S. law.

Opposing laws like the Patriot Act which strengthen the U.S. government's ability to thwart terrorism. In a March 2003 speech at Harvard Divinity School, Al-Marayati accused Congress of "overreaction over national security issues" and abdicating responsibility by passing the PATRIOT Act. He said passage of the law "makes it that much more difficult to ensure people's rights when they are being abused."

*Attacking U.S. government efforts to shut down charities involved in financing terrorism. Al-Marayati has repeatedly criticized U.S. government efforts to shut down charities for financing terrorism. In a June 2004 speech, he called the U.S. government's efforts to close these groups a violation of Muslim "civil liberties." These policies, according to Al-Marayati, are supported by "people whose interests are against Islam and Muslims, who are filing lawsuits for those assets to seize those assets in the name of defending victims of terrorism."

When the Treasury Department named the Islamic African Relief Agency (IARA), along with five senior officials, as Specially Designated Global Terrorists, for providing direct financial support to Osama bin Laden and Hamas, Al-Marayati complained that the shutdown occurred "just before the month of Ramadan" when Muslims traditionally give greater amounts of charity as part of their religious observance.

*Suggesting that American Jews and the Israeli military benefit from U.S. government double standards in targeting terrorist charities. In a July 2002 article, Al-Marayati defended the Holy Land Foundation, the Global Relief Foundation and the Benevolence International Fund – charities raided by the FBI and designated by the U.S. government as supporters of jihad terror.

"American Jews celebrate the fact that their children defer going to college in order to serve in the Israeli army, but American Muslims are chastised as terrorist sympathizers for giving money to refugees of war-torn countries," he wrote.

In a September 2006 speech at ISNA's annual convention, Marayati expanded on this theme – stating that Jewish and Christian charities benefited from post-September 11 policies, while Muslim charities suffered:

"The perception is if you are a Muslim charity that is giving to Palestinians, and now the Lebanese – you are going to be…targeted. If you're a secular or a Christian charity, you're not targeted. And if you're a Jewish charity, you're not targeted either. On the other hand, if you're a pro-Israel charity, not only are you promoted, but they brag about raising millions of dollars, and definitely in this latest episode in Lebanon, millions of dollars they've raised, and on top of that, the young men that they've recruited to join the Israeli army to go and kill Palestinians and Lebanese."

With Salam Al-Marayati's long record of anti-Jewish statements and opposition to virtually every measure the United States and fellow democracies take to defend themselves against terrorism, the notion that he has a constructive role to play in Muslim-Jewish dialogue or shaping U.S. security policy seems almost surreal.

this is so wrong. i know him personally. its aaaaaallllll wrong

I would like to say that our government is practicing the ancient ethos of "keep your friends close, and your enemies closer" - but that would be VERY NAIVE of me! I have never before mistrusted BOTH parties of our government more than I do today. Speaking of naive, BOTH parties are NAIVE to think that they can get into bed with these radical-thinking people and everything will be ok.