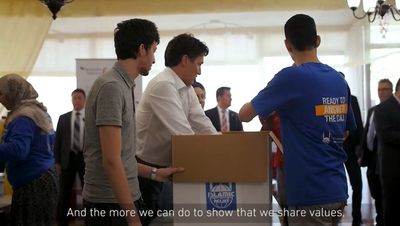 Canadian taxpayer money may be finding its way to Hamas, a listed terrorist group. The Criminal Code of Canada forbids funding terrorism, as well as forbidding the facilitation of those funding terrorism.

But last Friday, Minister of International Development Marie-Claude Bibeau announced that Canada would send $50 million in the next two years to the United Nations Relief and Works Agency for Palestine Refugees in the Near East (UNRWA). This is in addition to the $110 million that Prime Minister Justin Trudeau has committed to UNRWA since 2016. UNRWA has been repeatedly accused of supporting extremism, promoting violence and not checking beneficiaries against a list of known terrorists provided by the police.

The announcement made no reference to UNRWA's alleged connections, and said the money is meant to help provide education and health services to Palestinians.

Funding UNWRA is not illegal in Canada, although given the agency's reputation, it is a questionable use of taxpayer money. For instance, in August President Donald Trump withdrew $300 million in UNRWA funding. The U.S. government would no longer "shoulder the very disproportionate share of the burden of UNRWA's costs," a U.S. State Department press release said, calling it an "irredeemably flawed operation."

In addition to funding UNRWA, the Trudeau government gave millions of taxpayers' dollars to Islamic Relief Canada. Some of this money is forwarded to Islamic Relief Worldwide (UK), which has been repeatedly linked to Hamas.

That's why I joined with several concerned Muslim reformists in writing to the Royal Canadian Mounted Police last week requesting an investigation. You can read the letter here.

In June, MP Iqra Khalid of Mississauga announced that $23 million Canadian dollars would help fund her M103 Parliamentary Motion on "Islamophobia." The money, she said, would go to Islamic Relief Canada and a local boys and girls club.

A variety of independent and credible sources have identified Islamic Relief Worldwide as funding extremist and terrorist activities. This includes American think tank studies and international actors. The following is a partial list of statements concerning the activities of Islamic Relief International.

1. In 2014 the United Arab Emirates produced a list of organizations they deemed to be terrorist entities. Among those was Islamic Relief Worldwide and Islamic Relief UK.

2. In 2017, Bangladesh banned three organizations, including Islamic Relief, from working with Rohingya refugees fleeing Myanmar out of concern about potential radicalization in refugee camps.

3. In 2014, Israel banned Islamic Relief from operating in the occupied West Bank, accusing Islamic Relief Worldwide of being a source of funding for the Palestinian Hamas Islamist movement. That led the UK Charities Aid Foundation (CAF) to remove Islamic Relief from its online donations page. The Financial Post of Canada similarly removed Islamic Relief from a charity page "since its international arm has been banned elsewhere (though not in Canada) for allegedly funneling funds to the terrorist organization Hamas."

4. In 2015, the HSBC Bank of the United Kingdom closed Islamic Relief accounts citing fears that money could wind up with terrorist groups.

5. In 2012, the UBS cut ties with Islamic Relief due to concerns about counter-terrorist regulations.

The use of federally registered charities to fund terrorism is not a new practice. In the United States, the Holy Land Foundation for Relief and Development was considered the country's largest Muslim charity until it was shut down in 2001 for funneling millions of dollars to Hamas.

Canada revoked the International Relief Fund for the Afflicted and Needy (IRFAN)'s charitable status in 2014 for similar Hamas support. The Islamic Society of North America in Canada has suffered four different charity revocations – two of which were for funding the Jamaat e Islami terrorist group.

What is different in this case, however, is how the money is getting directed down the path to terrorism. In the recent past, it was private citizens exploiting weaknesses in government oversight of registered charities. Now, however, it appears that Canadian MPs are using their positions to direct millions of dollars to Islamic Relief Canada. Some of this money is passed to Islamic Relief Worldwide, which is in turn passing money to extremist and terrorist groups. Given that it is generally known about Islamic Relief Worldwide's terrorism financing connections, Canadian officials appear willfully blind.

Even if they don't know better, this practice violates Canadian law and Canadian values. An investigation could determine if the money could wind up in the hands of a terrorist organization.

Tom Quiggin is a former military intelligence officer, a former intelligence contractor for the Royal Canadian Mounted Police and a court appointed expert on jihadist terrorism in both the Federal and criminal courts of Canada. He is a co-author of SUBMISSION: The Danger of Political Islam to Canada – With a Warning to America.